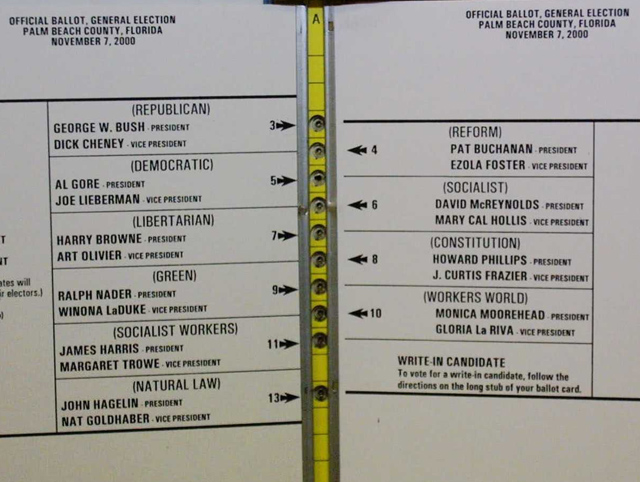 Just in case 2012 hasn’t filled you with Bush-Gore-repeat nightmares yet, there’s bad news from the South Florida epicenter of the 2000 debacle: Election officials in Palm Beach County say they screwed up at least 60,000 absentee ballots and have to perform a recount.

That’s right: The county that gave you the butterfly ballot is back. An error by the county’s printer caused ballots to go out to absentee voters with a typo, and as completed votes roll back into the supervisor’s office by mail, volunteer workers have to copy the votes by hand onto new ballots to ensure they’re counted by the county’s tabulation machines.

“It won’t be able to read [the misprinted ballots],” county elections supervisor Susan Bucher told the Palm Beach Post when the problem came to light two weeks ago. “It will just kick them out.”

If you’re asking, “How the hell?” here’s the deal:

The printing problem involved not putting a header over the merit retention races for judges on the Florida Supreme Court and 4th District Court of Appeal. Once the header was put back in, the alignment on the ballot shifted, making it impossible for tabulation machines to read both types of ballots. Bucher said machines can’t be programmed to read both, so the defective ballots have to be copied.

The typo affected 60,000 total ballots, but officials estimate they only have to copy about 27,000 by hand to make them count. Since last Monday, when the ballots could first be opened, about 40 volunteers have been working from 10 a.m. to 10 p.m. to transcribe the votes onto new ballots…all while representatives of the Obama and Romney campaigns literally breathe down their necks. It’s a process that’s expected to last through Election Day. “They’re getting better at it,” Bucher told the Post of her workers’ penmanship. “They’re doing really well.”

As with the county’s confusing presidential ballot in 2000, this printing snafu could have big implications. Though it has spent most of this election cycle in Ohio’s shadow, Florida is still a huge prize for both candidates: It’s integral to virtually all of Mitt Romney’s ever-shrinking paths to victory, meaning a steal by President Obama could put the election on ice. A recent Public Policy Polling tally had Obama over Romney, 49 percent to 48; Obama won Florida in 2008 by 236,450 votes, about 3 percent of all votes cast in the state.

Ironically, this Palm Beach ballot brouhaha can be traced to the conservative super-PAC Americans for Prosperity and its backers, millionaires Charles and David Koch. No sitting Florida Supreme Court justice has ever lost a retention election, but this year AFP and the Florida Republican Party have waged a lively campaign against three justices they say have ruled as “activists” from the bench.

Bucher could have stuck with the original ballot, missing header and all, and avoided the hand-tabulations. But given the scrutiny that AFP and other Supreme Court critics have heaped onto the justices’ retention races, her office could have faced a bevy of lawsuits if she hadn’t ordered the absentee-ballot transcription.

Asked about the typo and subsequent steps, state AFP director Slade O’Brien initially told the Post, “I wouldn’t touch that with a 10-foot pole.” He then added: “What a mess, is all I can say…Typical Palm Beach County.”