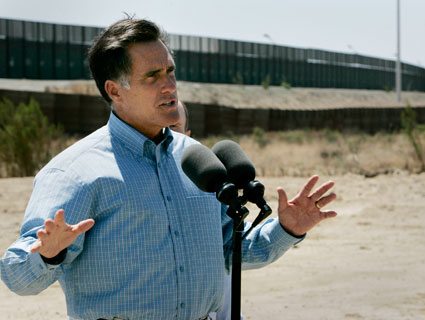 Mitt Romney talks at the US-Mexico border in California in 2007 about immigration and border security.Peggy Peattie/SDU-T/ZUMA Press

If President Barack Obama loses big Eastern states like Florida and Ohio on November 6, Western swing states like Colorado and Nevada could help him hold on to the White House. Polls in Colorado and Nevada make the states look like anything but sure bets for the president, but there’s good news for Obama: By undercounting Democratic-leaning Latinos, those polls could be dead wrong.

Shortly after the 2010 midterm elections, Jim Margolis, a longtime Democratic pollster who’s now a top media consultant for Obama’s reelection campaign, cowrote a memo outlining how the Democrats had managed to save his then-boss, Senate Majority Leader Harry Reid (D-Nev.). During the fall, Reid had looked like he was going to get swept away in the tea party wave that handed the GOP a majority in the House of Representatives. Polls showed Reid trailing his Republican opponent, Sharron Angle, by an average of nearly 3 points. Republicans were about to knock off the second Democratic Senate leader in a row, having ended Tom Daschle’s Senate career in 2004.

Then something weird happened. Reid won—by almost 6 points. In Colorado, another state with a large Latino population, Democratic Senate candidate Michael Bennet eked out a 1-point win despite polls showing his GOP rival, Ken Buck, up by an average of about 3 points. For good reason, politicos have calloused fingers from hitting refresh on New York Times‘ numbers guru Nate Silver‘s website, but even his model predicted likely Republican wins in Nevada and Colorado in 2010.

“Nobody had Reid winning, nobody had Reid ahead,” says Brad Coker, a pollster for Mason-Dixon, the firm hired by the Las Vegas Review-Journal to poll the state. “People underestimated the ability to turn out Hispanic voters the way they had turned out for Obama.” In the memo written after Reid’s win, Margolis and Reid pollster Mark Mellman said the same thing: Latino voters, undersampled by pollsters and written off as unlikely voters, had made a huge difference for Democrats.

How did this happen? According to Matt Barreto of Latino Decisions, a polling firm that specializes in public opinion surveys of the Latino community, pollsters were using outdated methods that simply missed the Latino voter surge. Small sample sizes of Latinos, ineffective or inadequate efforts to reach “Spanish-dominant” Latino voters, and failing to account for how many Latino voters would turn out kept most pollsters from identifying what immigration reform advocate Frank Sharry called the Democrats’ Latino “firewall” in 2010. Barreto argues that the polls often miss working-class Latinos, who are more likely to use cellphones, work long hours, and prefer to speak Spanish. Instead, the polls are more likely to reach more financially comfortable, “English-dominant” Latinos who are more likely to vote Republican. Robopolls, in which an automated prompt calls voters, tend to be particularly bad at measuring Latino public opinion, even when they have a Spanish-language option, Barreto says.

“When you start polling in any state that’s competitive with a big component of the electorate being Latino, you tend to see that they tend to underestimate the Latino vote,” says David Damore, a political science professor at the University of Nevada. “[The result] tends to be more Republican than it actually will be.”

Barreto says it’s happening again this year. “Pollsters who are missing that component of the correct proportion of Spanish interviews, they are completely underestimating a growing part of the electorate, and this is the part that is most heavily Democratic,” he argues. “They’re are operating on models that are at best 20 years old.” (Barreto expanded on his theory in a post written Monday.)

One of the biggest political changes over the past 20 years, Barreto claims, is among Spanish-dominant voters most likely to break toward Democrats. Many of these voters are naturalized citizens, a population that in the past hasn’t really made an impact at the polls. But since the mid-1990s, when immigration first started emerging as a hot-button political issue, these voters have been turning out in in greater numbers. Now, Barreto says, there’s evidence that they’re more likely to hit the ballot box than US-born Latinos.

Why does this matter? Even if Romney wins Virginia and North Carolina, Barack Obama only needs 33 of the the remaining 82 swing state electoral votes to win, while Romney needs 51. The race is so close that a shift of a few points among Latinos in states with large Latino voter populations like Colorado, Nevada, and Florida could determine who gets those crucial remaining electoral votes.

Latino Decisions’ polling has Obama poised to win more than 70 percent of the Latino vote (other surveys show similar numbers), but in several public polls of swing states, Barreto says, the Latino sample sizes are so small or so unrepresentative that they’re likely overestimating how many Latinos are going to vote Romney. After helping save the Democrats’ Senate majority in 2010, Latino voters may just rescue Obama’s presidency in 2012.

Jim Messina, Obama’s 2012 campaign manager, saw this coming. Messina, who worked on Reid’s campaign, had gotten to see the Senate majority leader’s strategy up close—and in an interview earlier this year, he hinted at a path to victory through the Mountain West. “Messina believes Romney’s problems with Hispanics are insoluble,” New York‘s John Heilemann wrote. The campaign manager went on to promise that Obama would win states like Colorado and Nevada “the way Harry Reid did—with a full discussion of the issues and a huge ground game.”