We all know which political party Hollywood big shots like Morgan Freeman or Jerry Bruckheimer back when election season comes around. But what about the actress who played Willie Scott in Temple of Doom? Who’s she backing?

Here’s a look at 15 celebrity campaign donations during the 2012 election cycle that you might have missed:

J. Peterman from Seinfeld is down with Romney. 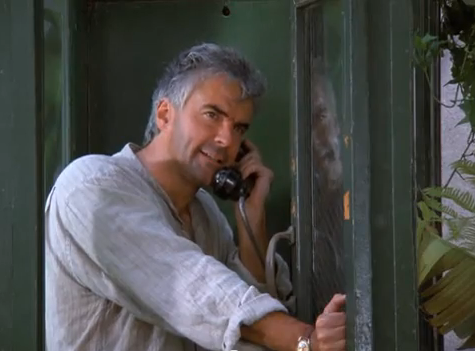 YouTubeIn 2012, actor John O’Hurley (best known for his role as Elaine Benes’ idiosyncratic boss on Seinfeld) gave $1,000 to the Romney campaign. You might also know him as the former host of Family Feud, Billy Flynn in a Chicago production of the musical Chicago, Professor Beltran on Sabrina, The Teenage Witch, or a top contestant on the first season of Dancing With the Stars (he competed on behalf of Golfers Against Cancer).

O’Hurley’s past political and humanitarian work includes shelling out over $2,000 for Rudy Giuliani’s failed presidential bid in 2008 and fundraising for Mark Cuban’s Fallen Patriot Fund. O’Hurley laid out his simple, anti-whining platform in this 2005 interview with the University of California-Berkeley’s student-run conservative weekly California Patriot.

Miami Vice is in the bag for Obama. 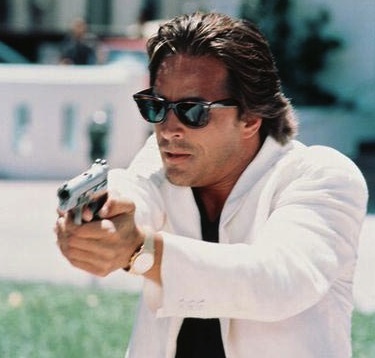 Of course, this doesn’t mean Johnson’s particularly vocal about his politics. Nor does he object to chumming around with the other side of the aisle. Click here for a photo of Johnson hanging out with the Reagans during a 1985 state dinner for the prime minister of Denmark.

Quentin Tarantino goes all in for… 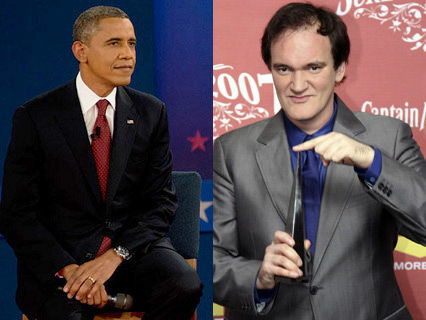 Barack Obama/Flickr ; pinguino k/Wikimedia CommonsThe acclaimed director (Reservoir Dogs, Pulp Fiction, the upcoming “ethnic revenge flick” Django Unchained) has emphasized that he is “not a political person,” and there isn’t much in his filmography or public statements that suggests otherwise. But for whatever reason, the controversial filmmaker has contributed $30,800 to the Democratic National Committee and $5,000 to the Obama campaign. Maybe the political ideals of his dear friend and frequent collaborator Robert Rodriguez (director of Desperado, Sin City, and the aforementioned Machete) have rubbed off on him: In just the first quarter of 2012, Rodriguez contributed $30,800 to the DNC, and $40,000 to the Obama Victory Fund.

There was, however, at least one other hint dropped over the last four years about Tarantino’s private political views: In February 2008, he was spotted “hoot[ing] and applaud[ing]” at an Obama fundraiser at the Avalon night club in Hollywood.

Lisa Simpson is a liberal in real life, too. 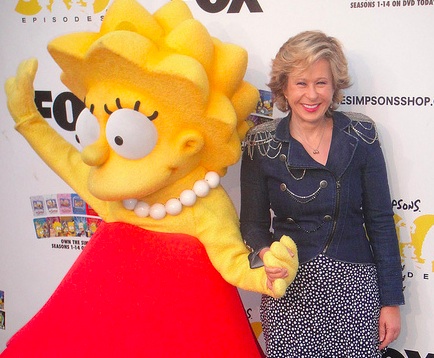 Lisa Simpson has deep, partisan pockets. At least her voice does: Yeardley Smith, the French-born actress famous for voicing Homer’s daughter, ponied up $61,600 for the DNC, and $5,000 for Barack Obama, in the 2012 cycle. That included $35,800 to the Obama Victory Fund and $5,000 to Obama for America in the second quarter of 2011 alone.

With art mimicking—or at least vaguely mirroring—life, Smith’s character Lisa is an avowed, bleeding-heart peacenik who embraces stereotypically liberal causes such as “Free Tibet” and militant vegetarianism. (Furthermore, it’s worth noting that if you’re on staff at The Simpsons, chances are you hate Republicans, anyway.)

There is no doubt who these band members support. 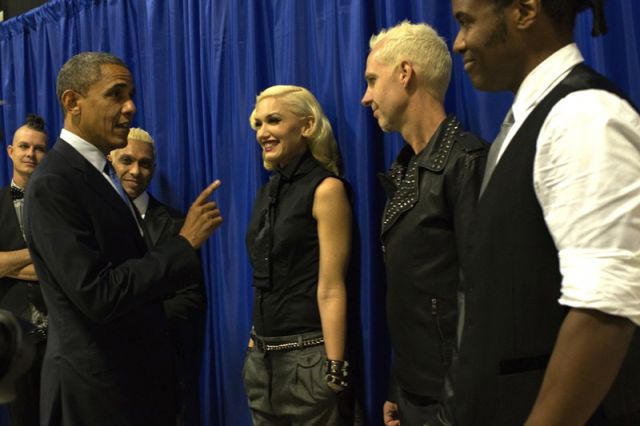 BarackObama.Tumblr.comIt’s been widely reported that Gwen Stefani, the lead singer for ska-influenced alt-rock group No Doubt, is one of Obama’s top bundlers, raising more for the campaign than even Bill Clinton or former Secretary of State Madeline Albright. But how about the rest of the band? It turns out that all three of Stefani’s current bandmates (Tom Dumont, Adrian Young, and Tony Kanal) opened their wallets for the same reasons: They’ve donated $1,250 apiece to the DNC, and $5,000 each to Obama.

On Wednesday, No Doubt closed for the president during his appearance on The Tonight Show With Jay Leno, performing their new single “Looking Hot.”

Democrat Jon Tester has the Temple of Doom/Halloween vote locked down. 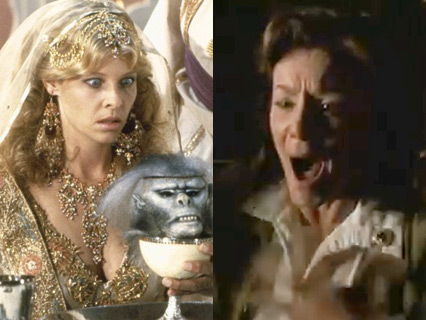 Jon Tester is a wolf-hating, steak-loving, buzz-cut-having Montana Democrat who’s locked in a wacky campaign fight that could very well determine control of the Senate. Fortunately, he has the support of Kate Capshaw, who played Willie Scott in Indiana Jones and the Temple of Doom, and Nancy Stephens, who was Michael Myers’ nurse in the Halloween series. Capshaw (left) gave $2,500 to Tester, while Stephens (right) threw down $1,250. The pair have also donated to a whole host of other campaigns and causes this year, including Tim Kaine’s run and the Women’s Political Committee.

The two actresses are married to directors Steven Spielberg and Rick Rosenthal, respectively. Both men are major-league Dem donors working in the Hollywood. (Stephens has given to Mother Jones through the Rosenthal Family Foundation.) 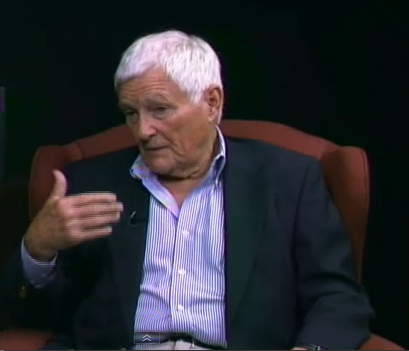 YouTubeActor and singer Orson Bean (first cousin twice-removed of Calvin Coolidge) has an impressive, eclectic list of television credits to his name. He played Lester in Being John Malkovich and Bilbo Baggins in a 1977 animated TV adaptation of J.R.R. Tolkien’s The Hobbit. He was also Andrew Breitbart’s father-in-law, and, according to Breitbart, turned him on to Rush Limbaugh and fueled the media impresario’s conversion from liberalism to conservatism. (Bean talks candidly about his politics and faith here.) Bean contributed $3,500 to Romney’s campaign. He pitched in with a couple hundred dollars to the RNC back in 2004, too. 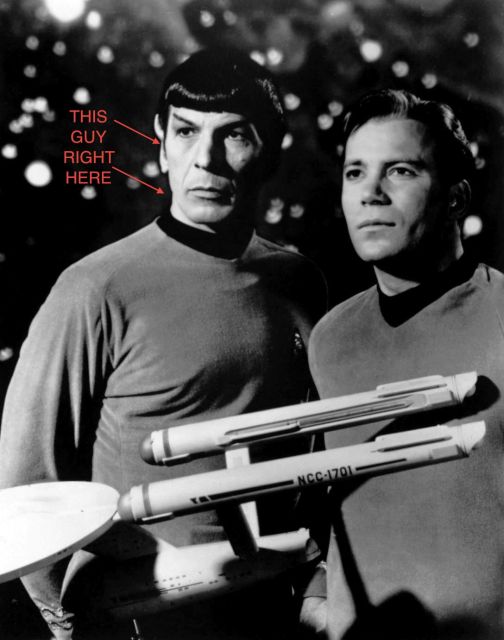 A-Rod goes to bat for… 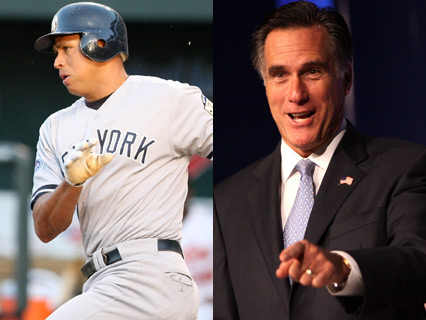 Keith Allison/Flickr ; Gage Skidmore/FlickrA-Rod is, most recently, famous for talking up blonde strangers during humiliating losses at baseball games. He gave $250 to Romney 2012, and another $250 to the RNC. He’s previously donated a few thousand dollars to Bush in ’04, and Giuliani in ’07.

But Rodriguez hasn’t been particularly explicit or extreme with his politics. Who knows? Perhaps he’s just a moderate, centaurist Republican. 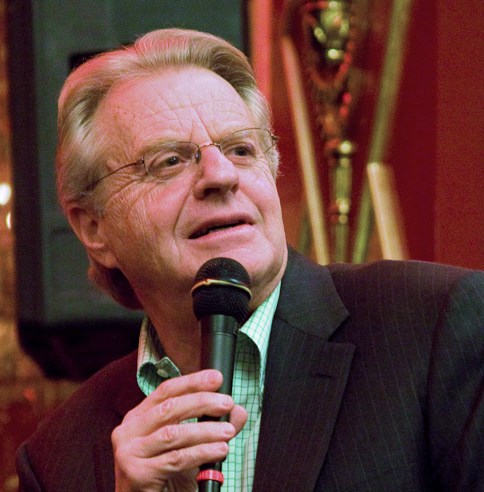 Justin Hoch/The Hudson Union SocietyIn case you forgot, the guy pictured above (host of that show in which chairs are hurled and lives are ruined) is also a former Democratic mayor of Cincinnati. During this election year, Jerry Springer has been making the rounds in Ohio in support of early voting rights, get-out-the-vote initiatives, and the president, whom he describes as “truly exceptional.”

Click here to listen to Springer compare tea party conservatives to dictators and Osama bin Laden, and click here for the campaign ad he cut back in 1981 during his failed run for Ohio governor (he talks solemnly about paying for a hooker). Now, here’s a profile of him from ’81, in which he wrestles a bear and dances to disco:

A tale of two fantasy writers 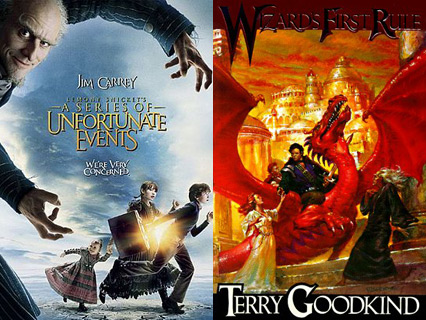 Obama and Romney each gets his own ideological fantasy novelist. San Francisco native Daniel Handler (a.k.a Lemony Snicket) is a popular children’s book author who’s big into the Occupy movement. This time around, he’s donated $5,000 to Obama for America and another $35,800 to the Obama Victory Fund, as well as $30,800 to the DNC. Terry Goodkind is the author behind the bestselling Sword of Truth series, which is full of wizards and Mud People. Goodkind’s politics skew towards the hard right, with a special affinity for Ayn Rand and the US intelligence community. He contributed $250 to Mitt Romney earlier this year, but not before exhausting his options with Herman Cain ($250, donated a month before the sexual harassment story broke in October 2011) and Newt Gingrich (a total of $1,500, between November 2011 and January 2012). 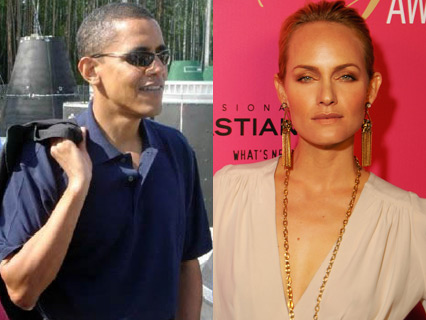 Senate Office of Richard Lugar ; Toglenn/Wikimedia CommonsAmber Valletta is a supermodel who played Lydia on ABC’s trashy Hamptons saga Revenge and enjoys saving the lives of whales in her spare time. She donated $900 to Obama and $450 to the DNC. 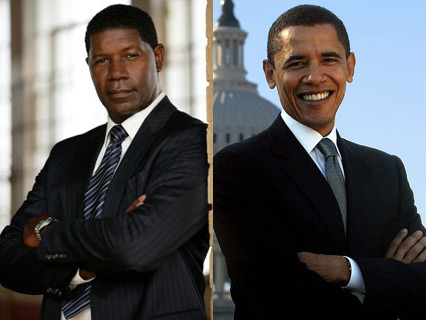 Fox ; US SenateFor five seasons, Dennis Haysbert played David Palmer on Fox’s 24. The character is a charming Democratic senator who becomes America’s first black president and goes on to be extraordinarily tough on Islam terrorism. Haysbert has said that his portrayal of Palmer was shaped by his high opinion of Bill Clinton, Colin Powell, and Jimmy Carter. Also, Haysbert argues that his character significantly helped lay the groundwork for public acceptance of an African American commander-in-chief, and thus paved the way for an Obama presidency.

So there you go.

Reminder: David Palmer, as beloved as he was by Jack Bauer, was a one-term president. By early November, we will know, (a) if Haysbert’s money actually did any good, and (b) whether this parallel holds.