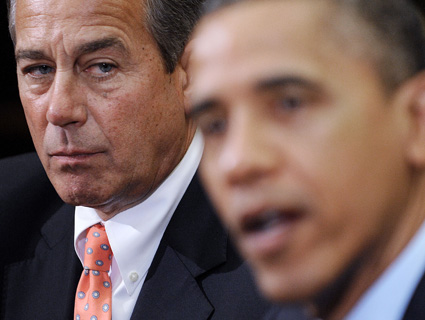 Although you might never know it from listening to the pundits, America isn’t broke. We have plenty of money to pay for government programs—we’ve just gradually lost our ability to collect it. Here are 10 ways, most of them long favored by liberal economists, that politicians could avoid the fiscal cliff’s $1.2 trillion in trigger cuts. While these ideas alone won’t immediately eliminate the budget deficit, they will, combined with expected growth, point the nation towards a sustainable fiscal path.

Stop giving investors a sweetheart deal
Additional revenue: $533 billion over 10 years
Low tax rates on capital gains are the main reason that billionaire investment guru Warren Buffett pays a smaller percentage of his income in taxes than his secretary does. In 2003, Congress capped the rate on capital gains (investment income) at 15 percent—far less than the 35 percent that people pay on their salaries. Tax hawks like to argue that raising the capital gains tax will stifle investment, but that argument isn’t supported by the evidence. (Just ask Buffett.) Taxing capital gains as ordinary income—just like the IRS treats the investment gains from your 401(k)—would have the added benefit of undermining “carried interest.” That, you may recall, is the ludicrous accounting trick that allows big fund managers (think Mitt Romney) to pass off their management fees as investment income, thereby avoiding the higher tax rates paid by their receptionists and janitors.

Quit subsidizing mansions and vacation homes
Additional revenue: $214.6 billion over 10 years
The popular mortgage interest deduction subsidizes home ownership but it also distorts the real estate market and favors the wealthy. That’s because people are allowed to deduct interest paid on mortgage debt up to $1.1 million—which in effect means that taxpayers are helping rich Americans pay for mansions and vacation properties. Eliminating the deduction entirely would likely yield the revenue gains listed above, but also make things tougher on middle-class homeowners. For a more palatable alternative, Congress could lower that $1.1 million cap to, say, half a million bucks and limit the deduction to loans on primary residences.

End the “step up” giveaway on inherited stocks
Additional revenue: $764 billion over 10 years
Suppose your Aunt Mildred bought stock in Acme Widgets back in 1940 for $10 a share and has watched it appreciate to $100 a share. If she sells it now, she’ll pay capital gains taxes on her $90-per-share profit. But if Mildred wills you the stock, you’ll miraculously forego taxes on her gains. To put it in accounting terms, Mildred’s $10-per-share “cost basis” will instantly “step up” to the stock price on the day you inherit it. So if she dies today, and you later sell your inherited Acme stock at $105, you only pay taxes on $5 per share. But eliminating this massive loophole would throw a wrench in the estate planning of lots of rich and powerful families, so don’t get your hopes up.

Revitalize the “death tax”
Additional revenue: $432 billion over 10 years
If you’re old and rich and had the choice, this would be a pretty good year to die. That’s because, unless Congress extends its Bush-era cuts to the federal estate tax (foes call it the “death tax”), the levy on inheritances will to revert to its old top rate of 55 percent and the exempt, nontaxable portion will go back to $1 million per individual beneficiary, down from about $5.1 million now. Even so, thanks to special breaks for family farms, businesses, and all but the largest holdings, the estate tax has never affected many households. In 2003, before cuts to the tax began taking effect, only 1.3 percent of deaths resulted in any federal estate-tax liability.

Heed America’s favorite investment guru
Additional revenue: $171 billion over 10 years
Asking people with taxable earnings of more than $1 million to pay an income tax rate of at least 30 percent, as Buffett proposes, would act as a bulwark against the armies of well-paid accountants and lawyers that aim to punch holes in the tax code. The so-called Buffett Rule wouldn’t raise as much money as repealing specific tax breaks that skew toward the top earners, but it would help ensure that their minions can’t just concoct a bunch of clever new ways to stiff Uncle Sam—not easily, anyway.

Reset back to Clinton-era tax rates for upper incomes
Additional revenue: $442 billion over 10 years
Despite a sharp increase in income inequality in recent decades (see our awesome charts), America’s top earners now pay nearly the lowest average tax rate in 50 years. So it doesn’t seem like too much to ask them to pay what they did during the Clinton years—remember budget surpluses and a healthy economy? Back then, people paid a top marginal tax rate of 39.6 percent on incomes exceeding $380,000. It’s worth emphasizing that marginal rates only apply to what you make in excess of a given income threshold; everything up to that point is taxed at a lower rate.

Take agribusiness giants off the federal teat
Additional revenue: $112 billion over 10 years
Contrary to the nonsensical rhetoric we hear from politicians every time Congress reconsiders the farm bill, agricultural subsidies do little to help struggling family farmers. If helping the little guy was the goal, the government could guarantee every full-time farmer a solidly middle-class income for about $4 billion—about half of what farm subsidies now cost us. Instead, the majority of subsidies go to farms with average earnings of $200,000; the biggest welfare recipients tend to be enormous corporate conglomerates that produce huge amounts of nutritionally vapid corn. Eliminating these corporate subsidies has proved politically impossible, however, given that agribusiness has a lock on farm state legislators from both major parties. And we’ve all witnessed Iowa’s outsized role in culling our presidential choices.

End oil and gas drilling in Washington, DC
Additional revenue: $158 billion over 10 years
Technological advances in hydraulic fracturing have set off the largest domestic oil boom in decades and minted plenty of new petro-billionaires. And the oil giants were pulling in mind-boggling profits well before the current boom began. In any case, their windfall makes it hard to justify the sweetheart subsidies enjoyed by the oil and gas industry. Among the breaks is the ability to write off almost all expenses nearly immediately, to deduct from their taxable income a flat percentage of revenue on all oil sales (known as “percentage depletion”), and to essentially take foreign tax credits even when they aren’t paying taxes abroad. Oil and gas companies also receive federal loan guarantees and qualify for a tax deduction for “domestic manufacturing.” The list goes on.

Forget cap and trade: Impose a carbon tax instead
Additional revenue: $1.25 trillion over 10 years
Climate change is already a sort of tax on carbon, one we all pay for with extinctions, plagues, wars, droughts, superstorms (hello, Sandy), and rising seas. Taxing carbon emissions, however politically fraught, is more efficient than cap and trade (which California just launched, by the way) as a way to force polluters to cover a portion of the massive environmental and health costs they impose on the public, and give the worst ones a big incentive to clean up their act.

Stop giving corporations an excuse to hide profits and send jobs abroad
Additional revenue: $583 billion over 10 years
Americans corporations are allowed to defer paying taxes on the profits of their offshore subsidiaries until that money is transferred back to the parent company. This rule gives companies an incentive to outsource jobs to low-tax jurisdictions abroad and to disguise domestic profits as foreign ones by, for example, transferring intellectual property such as software code to a subsidiary in a foreign tax haven and then paying the subsidiary royalties for the right to use it. Repealing “deferral,” as this loophole is called, wouldn’t cripple American competitiveness: US companies could still deduct taxes paid abroad from their federal taxable income.

Revenue as a Percent of 2012 Budget Deficit 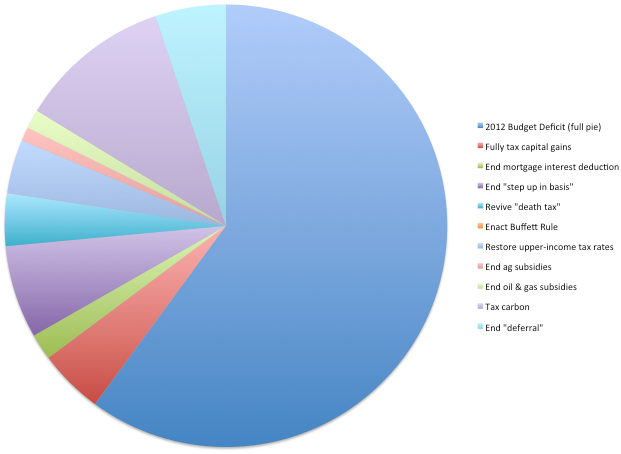 Also read “Fiscal Therapy,” wherein Pulitzer Prize-winning journalist David Cay Johnston fleshes out similar ideas that could not only repair the budget, but heal American democracy in the process.