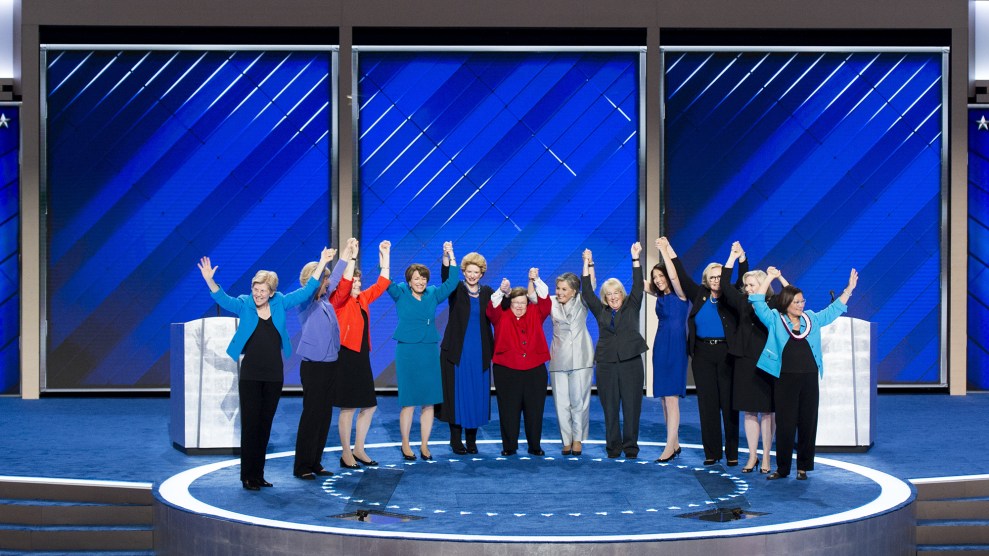 The women of the US Senate speak at the 2016 Democratic National Convention.Bill Clark/ZUMA

When the new Congress is sworn in next January, women will occupy 19 percent of its seats, a record number in both the House and Senate.

Spirits were high a week after the election when EMILY’s List, a political organization dedicated to electing pro-choice women, hosted a press briefing recapping the results. “Can I just start by saying, we won!” said Stephanie Schriock, the group’s president. “And we won across the board. It was a historic night.”

In many ways, she’s right. Democrat Heidi Heitkamp is the first woman elected* to represent North Dakota in Congress, ever. Democrats Elizabeth Warren in Massachusetts and Tammy Baldwin in Wisconsin and Republican Deb Fischer in Nebraska are all the first women elected to the Senate from their states. Democrat Mazie Hirono is both the first woman to represent Hawaii in the Senate, and the first Asian American woman in the upper chamber. And for the first time there will be two female combat veterans in Congress—Illinois’ Tammy Duckworth and Hawaii’s Tulsi Gabbard, both Democrats. And New Hampshire now has an all-women federal delegation and governor, with the election of Democrat Maggie Hassan.

It was enough to draw comparisons to the first “Year of the Woman,” 1993, when four women were elected to the Senate—a record at the time. The victory was largely attributed to Clarence Thomas’ Supreme Court confirmation hearings a year earlier, wherein Americans were shocked to see an all-white, all-male Senate Judiciary Committee grilling a young, black attorney named Anita Hill.

Twenty years later, 20 women hold seats in the Senate. Is that really enough to cheer about? Most of us would say yes, of course. But it does raise some fair questions about why we aren’t anywhere near parity yet. We still lag far behind the nations with the most parity—like Rwanda (whose legislature is 56.3 percent female), Andorra (53.6 percent female), and Sweden (45 percent female).

The problem is not that people don’t vote for women. Earlier this year, a study by the Women & Politics Institute at American University found that women candidates do just as well as their male counterparts at the polls, and in other measurable areas like fundraising. Rather, the tongue-soundly-in-cheek-titled report “Men Rule” found that women are less inclined to run: “There is a substantial gender gap in political ambition; men tend to have it, and women don’t.”

While 62 percent of the male respondents said they had thought about running for office, only 46 percent of women had.

The researchers surveyed nearly 4,000 people identified as potential candidates—community leaders, lawyers, activists, teachers—and found that while 62 percent of the male respondents said they had thought about running for office, only 46 percent of women had. Men were more likely to say that they were “qualified” or “very qualified” to run for office then women were. And even among men who said they didn’t think they were qualified to run, 55 percent said they had thought about it. Only 39 percent of women who felt they were not qualified had given thought to running.

They also found that women were less likely to get encouragement to run for office, from others in politics, colleagues, and even their spouses. It’s a challenge that EMILY’s List’s Schriock is familiar with. “It’s just not a natural inclination [for women],” she told Mother Jones. “They don’t necessarily think that politics is a place for them until they’re talked to about it.” Schriock also noted that most women have to be asked to run multiple times before they’ll throw their hats in the ring.

The “Men Rule” research also raised some interesting points about other reasons women shy away from electoral politics. Many, they found, thought it was too contentious, or that they might face sexist attacks. They found that having two very high-profile women in the presidential race in 2008—Hillary Clinton and Sarah Palin—may have actually discouraged women from running, as the majority of women felt that Clinton and Palin received sexist coverage in the media, that too much attention was paid to their hair, makeup, and clothes.

Sexist coverage was part of the inspiration for a campaign called “Name it, Change it,” launched by Political Parity, a coalition of groups that support women candidates. “Even mild sexism—a focus on hair and makeup—is a very lethal tool. It can make woman drop 10 points,” said Siobhan Bennett, president of the Women’s Campaign Fund and one of the founders of Political Parity, citing the “Name it, Change it” research from September 2010. The sexism can come from her opponent, or from pundits and other media commentators. “As long as she calls it out, she regains those votes.” Bennett ran for Congress in Pennsylvania in 2008, so it’s an issue she knows well. She was told to ignore it, she says, because “if you pay attention to it you make it bigger.”

“Yes, I do sometimes look at the clothes that I wear,” said Tammy Duckworth. “But for most of my adult life, I’ve worn one color. It’s called camouflage.”

New findings from Lake Research Partners, a Democratic polling organization, indicated that women candidates perform better when they call out sexism on the campaign trail—a strategy that seemed to work for Illinois congressional candidate Tammy Duckworth. When her opponent, Rep. Joe Walsh, claimed that “the only debate Ms. Duckworth is actually interested in having is which outfit she’ll be wearing for her big speech,” Duckworth had a ready retort. “Yes, I do sometimes look at the clothes that I wear,” she said at a later debate. “But for most of my adult life, I’ve worn one color. It’s called camouflage.” Walsh also drew attention for dismissing Duckworth as not being one of “our true heroes” because she talks about her military service.

Lake Research also conducted a survey on behalf of the Barbara Lee Family Foundation, which advocates for women in politics, looking at other more subtle bias against female candidates. This research found that many people will say that they would vote for a “qualified” woman for office, and that their standards for what makes a woman “qualified”—that they appear knowledgeable, confident, and organized—are often tougher than they are for men. “Voters really believe that yes, it’s harder for a woman to prove she’s qualified than a guy,” said Adrienne Kimmell, executive director of the Barbara Lee Family Foundation. “Voters have higher barriers.”

Women first have to demonstrates that they are qualified for the job—and benefit even by saying, directly, “I am qualified,” and then telling them why. Voters still hold women to higher standards than men if they make a mistake, but a quick response and outside voices that can validate their qualifications help make voters more forgiving.

Out in Wisconsin, it seems Tammy Baldwin was able to do that quite well as she took on former four-term Gov. Tommy Thompson. Baldwin’s communications director, John Kraus, said there wasn’t much overt sexism on the campaign trail—though one of Thompson’s aides did draw attention for comments made on Twitter about Baldwin dancing at a gay-pride festival. It was more subtle. “I think that the Thompson campaign was dismissive of her from the get go,” Kraus said. “They clearly thought that once they got through the primary, that was the fight that they needed to win and that the general election would be a cake walk for them.”

But as Baldwin showed, that was the wrong call. So how do we get more Tammy Baldwins, Elizabeth Warrens, Deb Fischers, and Tammy Duckworths in the queue?

“The most important thing is encouraging talented women to run, and helping them when they do,” said Bennett. “That single thing changes everything.”

* This has been corrected to reflect the fact that while Heitkamp is the first woman elected to Congress from North Dakota, the state did previously send a woman, Jocelyn Birch Burdick, to serve in the Senate. Burdick was appointed to finish out the last three months of her husband’s term after his death in 1992.