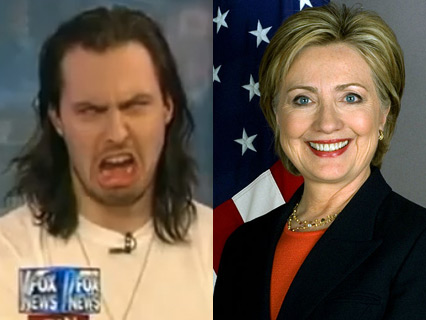 Over Thanksgiving weekend, hard-rock performing artist and self-declared “King of Partying” Andrew W.K. announced that he had just landed a new gig: America’s “cultural ambassador of partying” to Bahrain. Here’s an excerpt from his press release:

The US Department of State in partnership with the US Embassy in Manama, Bahrain, has invited Andrew to visit the Middle East to promote partying and positive power. In the tradition of the American Jazz Ambassadors who traveled the world in the mid 20th century as examples of American culture and spirit, Andrew has been invited by the State Department to travel to the Middle Eastern country of Bahrain and share his music and partying with the people there. Andrew will begin his journey sometime in December, 2012 and will visit elementary schools, the University of Bahrain, music venues, and more, all while promoting partying and world peace… For security reasons, the exact travel dates, details, and other specifics are being kept top secret at this time.

The US government appointing a rocker-diplomat—known for partying til he pukes, covering himself in blood, dabbling in the My Little Pony-based subculture of “bronies,” and sing-screaming about the McLaughlin Group—to represent American interests in the Kingdom of Bahrain? That sounds totally plausible! Nevertheless, a host of media outlets ran with the news without bothering to check with State Department, including UPI, the Huffington Post, New York magazine’s culture blog “Vulture,” Pitchfork Media, Breitbart.com, Mediaite, DCist, NME, Gawker, and Russia Today.

A State Department spokesman confirmed to Mother Jones Monday that the man behind the 2001 party-rock album I Get Wet will not in fact be partying ’til he pukes in Bahrain—at least, not in any official capacity. While Andrew W.K. was invited by a US embassy “cultural speakers program” for a possible overseas trip to Bahrain, the embassy in Manama later determined that the program was “not appropriate” and canceled it promptly “some time ago.” (As for why the recording artist is still hyping up his imaginary position online is anybody’s guess.)

To anyone familiar with Andrew W.K.’s exploits, the singer-songwriter’s story strained credulity from the get-go (Brooklyn web magazine Brokelyn expressed its doubts early on). If Hillary Clinton were to send a B-list celebrity on a goodwill mission to children’s schools in a Persian Gulf Muslim country with a lousy human rights record, why would she send the guy who sang “Party Hard” or “Party Party Party” for Aqua Teen Hunger Force?

For the uninitiated, here’s a clip of Andrew W.K. appearing on Fox News:

And here he is dancing on Conan O’Brien’s old show:

So, no, this man will not be going to the Kingdom of Bahrain on the US government’s dime in order to promote rock-star-style hedonism. That is a thing that is not happening.

I’m just blown away. After a year of planning, the US State Dept. just canceled my Middle East trip because I’m too party.

THE POWER OF POSITIVE PARTYING WILL NEVER DIE.

In response to this post, Andrew W.K. sent Mother Jones the following message:

I’m not legally allowed at this exact moment to go into too many details, but they invited me a year ago and then canceled this morning. They said they had changed their mind and decided I wasn’t appropriate. I was scheduled to go there this weekend…The trip had been confirmed and developed over the past year—their cancellation only happened today, which is why it’s so important to make that clear that after all the planning, they canceled it THIS MORNING, not ‘some time ago.'”