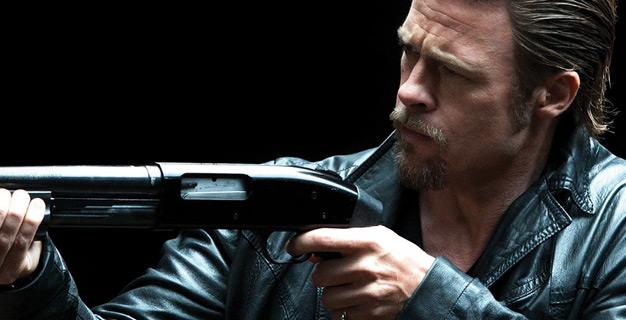 Courtesy of The Weinstein Company

Along with Steven Soderbergh’s Magic Mike, Killing Them Softly is so far the best Great Recession movie to emerge out of the film industry. (Sorry, Margin Call.)

The story is set in a decayed corner of New Orleans in 2008, at the dawn of the financial crisis. Toward the beginning of the movie, two amateur crooks—both wearing yellow dishwashing gloves, one brandishing a sawed-off shotgun—knock over a small mob-operated casino. As the pair raid the safe and force gamblers to empty their pockets and shoes, a televised address by George W. Bush echoes in the background. The president speaks calmly but deliberately about public panic and market meltdown, as hardened gangsters sit quietly while their wallets are emptied at gunpoint. The thieves then abscond with their bag stuffed with grime-smeared cash. And just like that, they trigger a total “economic collapse” of the local illicit-gambling/mobster economy.

As I started adapting [the novel], it was the story of an economic crisis, and it was an economic crisis in an economy that was funded by gambling—and the crisis occurred due to a failure in regulation. It just seemed to have something that you couldn’t ignore. I always feel that crime films are about capitalism…

As the film progresses, archival clips of Bush, Treasury secretary Henry Paulson, and candidate and then President-elect Barack Obama seem to constantly insert themselves into the background. Their voices, gloomily framing dialogue and action, help craft this deromanticized mafia underworld into a violently seductive analog of capitalism’s excesses. It’s a surprising and potent message that never veers into heavy-handed territory, primarily due to the film’s strength of style, its flooring visuals, and the deft acting.

Brad Pitt (who also starred in Dominik’s fantastic 2007 period piece The Assassination of Jesse James by the Coward Robert Ford) plays Jackie Cogan, the assassin the crime syndicate calls in to clean up the mess. Staying within the economic-crisis metaphor for the moment, Jackie is the financial regulator, but instead of holding congressional hearings and demanding halfhearted reform, he shoots people to death. Pitt (in a lead role he landed via text message) performs with ice-cold charisma and delivers his lines with an almost whispered intimidation, furthering his critical winning streak that includes Moneyball, The Tree of Life, and Inglourious Basterds (but skipped over 2011’s Happy Feet Two).

“I always feel that crime films are about capitalism.”

The rest of the cast has a ball with the script’s dark wit and gangland nihilism. Scoot McNairy and Ben Mendelsohn, as the drug-addled small-time crooks, provide much of the film’s sharp but uncomfortable comic relief. Ray Liotta—most famous for his role as a coke-fueled asskicker in Goodfellas—is thoroughly convincing as a bullied and whimpering mob cohort. And James Gandolfini as Mickey excels as cuckolded, whore-mongering, depressed schlub of a hitman with a dirty mouth (his finest performance since Armando Iannucci’s Iraq War satire In the Loop). “I was drinking before you got out of your father’s cock! Don’t tell me what to do,” Mickey sneers at Jackie, while knocking back another martini.

Beyond the none-too-subtle politics and laudable acting, Killing Them Softly showcases Dominik’s immense talent for making movies with double barrels of grace and grit (not to mention an impeccable soundtrack that in this case ranges from the Velvet Underground to Ketty Lester). The robbery scene is so intensely shot and tightly choreographed it’s like a dose of slow-burn Michael Mann. And there is a slow-motion assassination sequence in the rain that uses CGI effects to turn shattering glass and flecks of gore into visual poetry, set to the rhythm of the 1962 hit “Love Letters” (a possible homage to David Lynch’s Blue Velvet).

All elements taken together, Killing Them Softly ranks among the very best films this year has had to offer. (So far, the only 2012 movie I enjoyed more than this was another one with “kill” in the title: William Friedkin’s sleazy and brilliant trailer-trash opera Killer Joe.) But at the heart of the film’s thrills and pitch-black humor is a cold, somber truth.

“This guy wants to tell me we’re living in a community? Don’t make me laugh,” Jackie says, slamming Obama’s hope-and-change message as the president-elect delivers his 2008 victory speech. “I’m living in America, and in America, you’re on your own. America is not a country; it’s a business. Now fucking pay me.”

Killing Them Softly gets a release on Friday, November 30. The film is rated R for violence, sexual references, pervasive language, and some drug use. Click here for local showtimes and tickets.