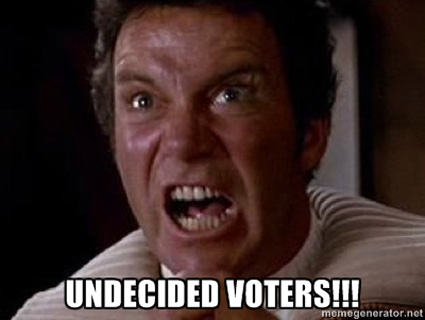 It’s Election Day’s eve, and even as voters are raring up to perform their patriotic duty, polls taken as recently as last week show a small percentage of registered voters who are still undecided about who they will choose for president.

To which any reasonable person might ask, REALLY!? Do these people not have access to a TV or computer? Do they lack a radio? Or a phone? Or a freaking mailbox!? Is it that they are uninformed about the issues? We’re baffled, honestly.

In the face of this unfathomable indecision, we’ve compiled the following playlist dedicated to the truly ambivalent, the overtly flaky, the grossly uninformed, and the vexingly indifferent.

Bibio, “Ambivalence Avenue”: The title track for this UK band’s 2009 album is a loopy collage of guitars and flutes encapsulating a golden sunshiny day spent watching the leaves fall from the flaky trees. Which is how we imagine you undecided voters spend most of your dippy lives.

Ramones “Now I Wanna Sniff Some Glue”: And this is what we imagine you do with the rest of your time.

U2, “I Still Haven’t Found What I’m Looking For”: But maybe we’re wrong. Maybe you’ve taken the time to parse the platforms of the two major party candidates and read up on all the third party options and still haven’t found Mr. (or Mrs.) Right (or Left).

Stealers Wheel, “Stuck In The Middle With You”: This served as the soundtrack for one of the most epic torture scenes in American cinema. Deciding on a presidential candidate shouldn’t be torture, but for many of the undecided it might be a disappointment issue. Clowns to the left of me, jokers to the right? Fair enough.

The Clash, “Should I Stay Or Should I Go?”: In this 1981 classic song of indecision, Mick Jones pleads with a lover to help him decide whether to pursue a relationship with her or to just piss off. In the case of the undecided voters, we think you should do some last minute boning up on the candidates and then piss off…to the polls.

Marvin Gaye, “What’s Going On?”: When Marvin Gaye wrote this 1970 clasic it was penned as an way to vent his sorrow and frustration over the horrors of the Vietnam War and the injustice of racial inequality and police brutality. But it’ll also suffice for the clueless few who might not even know we have an election tomorrow.

The Rolling Stones, “Sittin’ On A Fence”: Yet another rockstar equivocating over love decisions. With Brian Jones on harpsichord, Mick sings, “The day can come when you get old and sick and tired of life, you just never realize maybe the choice you made wasn’t really right.” There there. It won’t be all your fault if the person you choose is elected president and then leads the country into World War III.

The Lovin’ Spoonful, “Did You Ever Have to Make Up Your Mind”: This ’60s pop group knows it’s not often easy and it’s not often kind to make a decision. This is for those of you who are afraid to vote because it might hurt someone’s feelings.

Pink Floyd, “Comfortably Numb”: The barrage of negative campaign ads is enough to break any rational person and lead her to self-medicate into a smoky stupor only to wake up on a college friend’s couch listening to a mix CD—of 14 different covers of this song on repeat, for example. But drink some coffee, splash some water on your face, and pull yourself together for long enough to cast your ballot. #Sunglassesandadvil

Tom Waits, “Emotional Weather Report”: With election officials scrambling to set up new polling places in towns still without power as a result of Hurricane Sandy, the election may be the last thing on some people’s minds. Then again, the two major parties and their presidential candidates differ widely in their views on climate change, which may have been responsible for supersizing the storm.

Natalie Imbruglia, “Torn”: Overwhelmingly, the voters who remain undecided are women. But there are plenty of reasons that women need to make their voices heard in this election. Don’t be like Natalie Imbruglia and wake up cold and shamed and lying naked on the floor…of some back alley abortion clinic.

Talking Heads, “Tentative Decisions”: In this 1975 track, David Byrne sings about boys and girls “concerned with decisiveness.” But “Decide, decide, make up your mind,” he urges. Indeed.

Hüsker Dü, “Indecision Time”: The punk band out of St. Paul understands what it’s like to be torn over a tough decision on this track from their 1984 album Zen Arcade. “Go to the left, go to the right. Your mind is gonna keep you up all night. You twist in your sleep, grabbing the sheets. Sweating to death.” Dude, chill. While choosing the next commander-in-chief is an important decision, it shouldn’t keep you up at night.

Merv Griffin, “Jeopardy song”: Nothing says the clock is ticking like this song (besides an actual clock). Here for your listening pleasure is the Jeopardy song… on repeat… for an hour. If listening to this over and over can’t force a decision out of you, there’s little hope left in this world.

The Beatles, “Don’t Let Me Down”: But for all the grief we’re giving you undecided voters, we really have the good of the nation in mind. So take some time right now to educate yourself on the candidates, and then vote tomorrow. Don’t let America down.