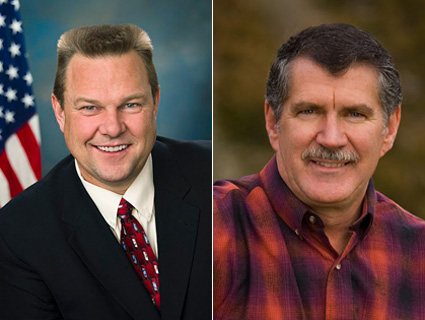 Each man in the Montana Senate race wanted to prove he was the bigger cowboy. The contest attracted record-breaking campaign donations that worked out to about $16 per cow. And after a long night of ballot counting, the Associated Press announced Wednesday morning that the winner of this Western standoff is seven-fingered incumbent Democrat Jon Tester, whose victory ensures Democrats and their allies will control at least 53 seats in the Senate.

The race between Tester and Republican Rep. Denny Rehberg was among the most closely watched of this election cycle, with the two candidates running neck and neck throughout the campaign. Outside groups, including Karl Rove’s American Crossroads, spent at least $23 million running attack ads in the state, making it the most expensive race in Montana’s history.

Tester, a third-generation farmer, has served on the Senate since 2007. He’s pro-choice, supports Obamacare, and voted to repeal Don’t Ask Don’t Tell, even though he doesn’t support gay marriage. He took a strong stance against the Supreme Court’s Citizens United ruling, predicting it would be “disastrous for our democracy.” He even proposed that both he and Rehberg should pledge to refuse any Super PAC or third-party group support during the Senate race—a suggestion that Rehberg shot down.

Rehberg, a fifth-generation rancher, tried to portray himself as a maverick by skipping the Republican National Convention and highlighting his opposition to the Paul Ryan’s budget in campaign ads. But the GOPer drew criticism over his enthusiasm for domestic drilling, staunch denial of climate change, and past opposition to AIDS funding. According to Rehberg, “The problem with AIDS is, you get it, you die, so why are we spending any money on people that get it[?]”

A super-PAC funded by Tester supporters made a last-minute $500,000 ad buy for Dan Cox, a libertarian candidate who looks certain to draw more than 5 percent of the vote. The Montana GOP has accused Tester supporters of dirty tricks for allegedly trying to funnel Rehberg votes to Cox. They’re right to be peeved: Cox’s vote total is currently greater than Tester’s winning margin, adding weight to the theory that the libertarian’s presence in the race may have made the difference.

This year’s Montana Senate race will also be remembered for its strange, entertaining campaign ads: Rehberg supporters made fun of Tester’s haircut, accused him of not tipping and said Obama and Tester were twins. The Montana Democratic party tried to frame Rehberg as a drunk and showed Tester bringing Montana beef to Washington. And then there was the ad for Cox showing a guy on a hunting trip with his son shooting out a security camera. Boring, the Montana Senate race was not.