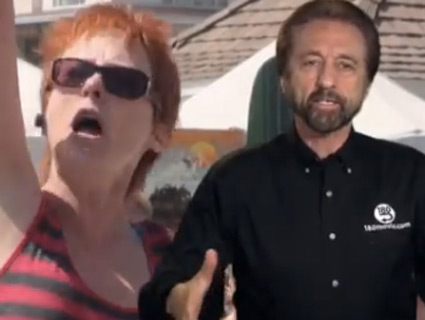 Ray Comfort, a Christian minister and socially conservative activist from New Zealand, made quite a splash last year when he made a documentary that the Anti-Defamation League slammed for equating the Holocaust to abortion in America. Now he’s released a new movie, and its subject matter is a bit odd for a provocateur of the Christian right: John Lennon.

The documentary Genius—released this week to coincide with the December 8 anniversary of Lennon’s death—portrays the former Beatle as a conservative-friendly anti-evolution rock icon. “John Lennon didn’t believe in the theory of evolution; he said it was garbage,” Comfort narrates, citing one quote from a 1980 Playboy interview in which Lennon expresses his doubts about Darwinism. The quote is a favorite among pop-culture-savvy anti-evolution types, even though the full context shows Lennon ripping Young Earth creationism as equally “insane.” Comfort also analyzes the supposed godly subtext to “Imagine“—a song reviled by Christian right leaders like Pat Robertson for its anti-capitalist, anti-religious message. Furthermore, the documentarian brushes aside Lennon’s famous 1966 “more popular than Jesus” comment as no big deal. At the time, the statement provoked international outrage, public bonfires of Beatles records and memorabilia, and threats from the Ku Klux Klan. Genius does briefly acknowledge that Lennon’s flirtation with Christianity in 1977 was short-lived, and that he went on to record the “blasphemous” song, “Serve Yourself.”

Though Comfort promotes the movie (which he wrote, directed, and stars in) as a feature focusing on Lennon’s musical “genius” and his shifting attitudes toward Christianity, much of it has nothing to do with the rock star. Instead—in what might be called a bizarre directorial decision—long stretches are devoted to footage of Comfort berating strangers on a California boardwalk and informing them that there’s a good chance they’re all going to Hell.

The feisty evangelist asks unsuspecting passersby moral questions relating to theft and murder, including whether they’d kill a man for $10 million. He rails against the vast moral entropy of “atheistic evolution.” He asks a baby in a stroller if he knows who John Lennon is. He loudly denounces hellfire-worthy offenses like smoking pot, sexting, and swearing casually. (One particularly weird encounter involves Comfort engaging in a public shouting match with a red-headed Buddhist who says she’s a rape victim about whether or not Heaven exists.) And in a not entirely unexpected stunt, given his previous film, the minister makes sure to explicitly compare random people he meets on the street to mass murderers like Dark Knight Rises theater gunman James E. Holmes.

“You’re in big trouble! I don’t want you to go to Hell!” he yells, as confused-looking bystanders stare at him. With such scenes, the movie quickly degenerates into disjointed narrative.

Genius was released through Comfort’s Living Waters Publications, a evangelical training center and production company based in a Los Angeles suburb. The movie ends with a simple goal: To sell stuff for money. With the tone of a generic infomercial, Comfort encourages viewers to buy the DVD in bulk and distribute it to “this dying generation.” He also advertises his book The Beatles, God and the Bible, a 180-pager published by WND Books, the publishing house that released disgraced lobbyist Jack Abramoff’s recent memoir. (Early this year, WND Books put out Comfort’s similarly titled Hitler, God, and The Bible.)

Here’s the full 34-minute-long Genius, posted to YouTube on December 5:

The half-hour doc. has received attention in the usual circles. The Christian Post, birther website WorldNetDaily, Charisma, American preacher and bestselling author John Piper, and the Florida-based ministry Creation Today have plugged it.

He’s attacked Animal Planet as godless propaganda directed at children. He’s trolled Richard Dawkins. He has sent cards to the elderly in New Zealand reminding them that they’re going to die.

Comfort’s admiration of John Lennon might seem counterintuitive to your average Lennon fan, seeing as how much of the singer-songwriter’s public image was defined by his association with the radical New Left of the 1960s and his experimentation with drugs. Also, there’s the fact that Lennon once described his signature track “Imagine” (a song that Comfort praises) as “virtually the Communist Manifesto.” Lennon also wrote “God,” which rejects biblical, religious, and political hero worship.

It’s also odd that such a pro-Lennon documentary would come from an evangelist known for often extreme and fundamentalist positions. For over a decade, Comfort has been on the Darwinism/Creationism debate tour circuit, meeting secularists and scientists in public forums to tell them why they are scientifically and morally wrong to endorse the theory of evolution. He’s attacked Animal Planet as godless propaganda directed at children. He’s trolled Richard Dawkins. He has mass-mailed cards to elderly people in New Zealand reminding them that they’re going to die and that they should accept Jesus as their savior before it’s too late. In 2001, he teamed up with conservative activist and former Growing Pains star Kirk Cameron to launch their own ministry. The two of them became frequent collaborators, and worked together to rewrite the script Left Behind II: Tribulation Force, the second entry into the critically panned Christian-apocalypse film series in which Cameron stars.

To top things off, here’s a clip of Comfort hanging out with arch-televangelist Pat Robertson in 2009:

It’s hard to tell exactly why Comfort is now fixated on John Lennon. He wouldn’t respond to requests for comment. Perhaps God only knows.