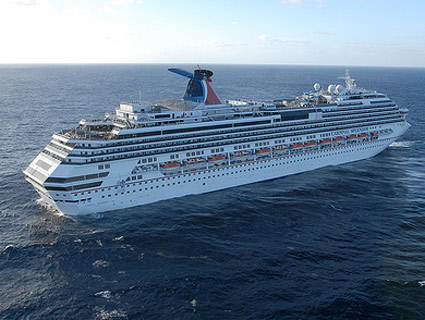 Considering hopping aboard a cruise for the holidays? A new report from Friends of the Earth (FOE) might make you rethink your plans.

FOE just released a report card that evaluates 15 major cruise lines on their environmental footprint—and despite being graded on a curve, the class did not do well. Since the release of FOE’s last report card in 2010, more than half have not significantly improved, and 11 were given a grade of a “C” or worse, including three who failed.

“I think the cruise industry for many, many years has really flown under the radar when it comes to environmental regulations,” said Marcie Keever, oceans and vessels project director at FOE. “They travel to some of the most pristine places on the planet, and they should improve their practices to ensure those places remain pristine.”

The cruise lines were evaluated on sewage treatment, water quality compliance, and air pollution reduction. The group fared the worst on the last category: Ten received an “F” and none got an “A.” According to Keever, tens of thousands of ocean-going vessels continue to use bunker fuel, which is “bottom of the barrel, literally in a semi-solid state, and has to be heated to be burned in ships’ engines.”

Beginning last August, a new rule began to require ships to use cleaner fuel with 1 percent or less sulfur content in the waters off the North American coast. By 2015 that number must be reduced to .1 percent. Previously, ships used fuel with about 2.5 percent sulfur, making it approximately 1,700 times dirtier than the diesel fuel used by trucks. Implementing these standards will significantly decrease ozone levels, reduce levels of particulate matter in the air, and ultimately avoid between 12,000 and 31,000 premature deaths by 2030.

However, cruise lines have been fighting the rule, projecting that following these new guidelines would result in a loss of 14,000 jobs and an annual loss of $1.5 billion to local economies. The cruise ship industry argues that the unavailability of cleaner fuel as well as increasing costs may force them to abandon particular routes and destinations.

Cruise ships’ sewage treatment practices are another public health threat, and performance in that category was similarly dismal. Seven lines were given a “C” or worse, which is particularly concerning since the EPA estimates that 3,000 person cruise ships generate 210,000 gallons of sewage per week, enough to fill 10 backyard swimming pools.

Ships are banned from discharging untreated waste into the ocean within three nautical miles from shore, but beyond that boundary liquids from the ship’s dry cleaner, medical facility, photo lab—along with whatever passengers have been flushing down the toilet—can be dumped into the water. FOE encourages more states to adopt policies like California’s, which last February was designated a federal no-discharge zone, meaning no ocean vessels can discharge any waste, treated or untreated, along its coastline.

Voters in Alaska, which sees approximately 1 million cruise ship passengers per year, passed an initiative in 2006 requiring more stringent wastewater dumping regulations. However, the cruise line industry has continued to fight implementation, claiming the costs are too high.

But Keever argues that retrofitting a cruise ship with advanced wastewater treatment capabilities would cost, “per passenger, the amount of a can of coke.”