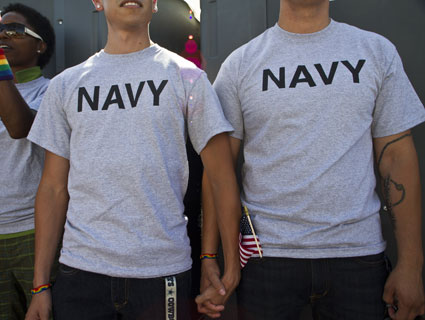 A defense spending bill set to become law contains a provision that could allow discrimination against gay and lesbian service members and other minorities in the military, legal experts warned Wednesday. The controversial measure stems from a proposal originally introduced by Rep. Todd Akin (R-Mo.) the Republican Senate candidate from Missouri whose remarks about “legitimate rape” launched a nationwide controversy that doomed his candidacy.

Now a final draft of the defense bill has emerged from closed-door negotiations between the House and Senate with a version of Akin’s measure. While Democratic lawmakers say this compromise proposal would change nothing, critics say the new bill is actually worse than Akin’s, because it now requires the military to “accommodate” not only anti-gay bias, but also any other strongly held beliefs.

“It’s going to generate endless issues,” says Eugene Fidell, who teaches military justice at Yale Law School. “The people who are behind this have mischief in mind rather than solving problems.” The ACLU, in a statement, called the latest version of the bill “sweeping and dangerous.”

The defense bill currently states: “The Armed Forces shall accommodate the beliefs of a member of the armed forces reflecting the conscience, moral principles, or religious beliefs of the member.” It also states that “in so far as practicable, [the military] may not use such beliefs as the basis of any adverse personnel action, discrimination, or denial of promotion, schooling, training, or assignment.” The original version introduced by Akin was specifically focused on service members’ views on the “appropriate and inappropriate expression of human sexuality.”

Under the new proposal, critics say, a military doctor could refuse to perform a cancer screening for a female service member who had premarital sex. Troops who believe homosexuality is morally wrong could refuse to serve with gays or lesbians. Although the bill states service members can still be disciplined for “conduct” that negatively impacts “good order and discipline,” it also states their beliefs must be accommodated, potentially setting up a legal conflict over what the military’s obligations are. Is someone who refuses to share living facilities with a gay colleague engaging in conduct that can be punished, or expressing a religious belief that must be “accommodated?” It’s unclear.

“The only way you could accommodate [homophobic] beliefs is by putting [homophobic people] in a unit with no gay people in it,” Fidell says.

The Pentagon, however, doesn’t see the new language as much more than a sop to the religious right. “It simply says those thoughts you’ve been thinking all along, you’re allowed to keep thinking them,” a Defense Department official said. “We do not attempt to police thought. We are concerned, however, with actions and speech, and so long as neither threaten good order and discipline, we do not consider this to be a significant concern.” A Senate Democratic aide agreed, saying, “There is nothing in this provision that would condone discrimination against gay and lesbian service members, or any other service member. It merely reflects current policy.” OutServe-Service Members Legal Defense Network, a group that advocates on behalf of gay and lesbian service members, also said they didn’t think the bill would alter the state of the law.

As wrangling over the final version of the bill commenced, Republican negotiators pushed hard to retain Akin’s proposal. They have succeeded in persuading Democrats to go along with what could be a substantial change to law governing the military without so much as a hearing on the subject.