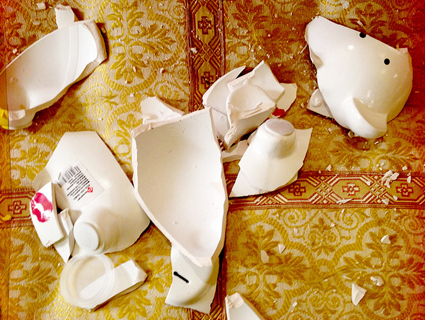 Today Barbara Buchner, a market analyst for Climate Policy Initiative, arrived at the UN climate talks in Doha, Qatar, not to offer solutions, but to figure out how we’re going to pay the tab. In her hand is a new report from CPI adding up just how much money the world is spending on climate change mitigation and adaptation. The good news, she says, is that global climate investment is greater than ever before. The bad news: It still might not be nearly enough.

“The gap really is still large,” she says.

Buchner’s measuring stick is a report released this summer by the International Energy Agency showing that to stay within the internationally agreed-upon two degree celcius warming limit set in past iterations of the UN’s climate talks, humanity will need to spend an additional $1 trillion a year between now and 2050 (on top of what current policies already stipulate) on climate-related investments like renewable energy, energy efficiency, and climate-proofed infrastructure. Today’s CPI report pegs current global climate investment at $364 billion, for 2010-11: 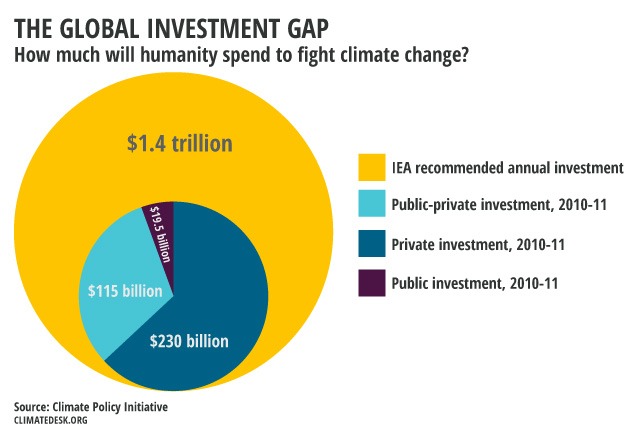 The key finding, Buchner says, is that while pricey government programs like federal flood insurance or algae biofuel research often make headlines, the private sector is really the one picking up the bulk of the climate-action bill, and is likely to continue to do so into the future.

That means the best investment of public dollars is to help spur further private investment, like tax incentives for renewable energy. Policy can also push private investment in a greener direction, as in the case of Obama’s fuel efficiency standards. In other words, closing the climate investment gap will mean choreographing an intricate, worldwide dance between government and industry. 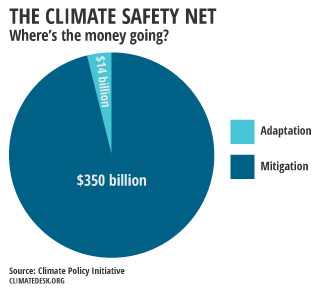 Chart by Tim McDonnellThe CPI report also found that investment in climate mitigation—slowing negative impacts by conserving energy and choking off greenhouse gas emissions—far outpaced that in climate adaptation—shielding us where it’s too late—a sign that we’re still more committed to stemming climate change than to fighting it off (see chart)—although, in the wake of Superstorm Sandy and with sea levels rising even faster than predicted, that balance could be in for a shift. Still, heading off to Doha, where climate progress is inching forward at its typically glacial pace, Buchner says she’s optimistic about the future of climate finance.

“What’s been really exciting for me is just seeing business being involved much more than it was once,” she says. “And I think that’s a good sign, because without the private sector we won’t be able to change the direction of our current pathway.”

Listen to Barbara Buchner explain how to close the global climate investment gap, on the eve of her departure to Doha: