By the time a politician appears on the cover of Mother Jones, our readers are if anything all-too-familiar with them; it’s our job to present them to you in ways that are surprising, enlightening, and hopefully apt. Over the years the rogue’s gallery of baby-kissers has included a confident-looking Ronald Reagan, a badly-beaten Bill Clinton, and a Hillary cover which didn’t actually depict the then-presidential candidate. Take a look and see whether we’ve included your favorite. 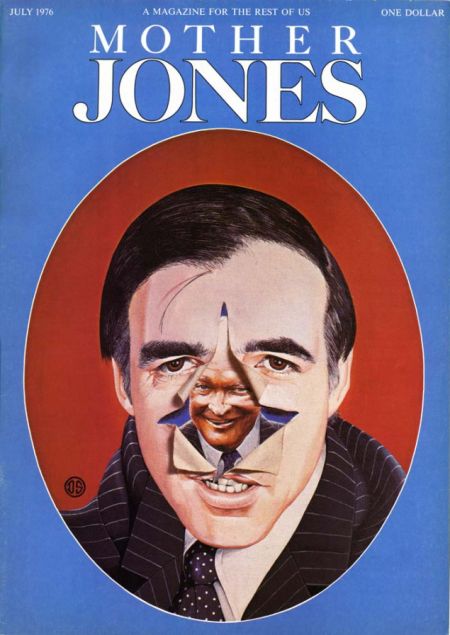 Jerry Brown, July 1976: This headline-free cover represents the young Mother Jones‘ feeling that despite his “symbolic words and phrases,” Jerry Brown, the then- (as well as now-) governor of California who was running in the 1976 Democratic presidential primaries, talked a much more progressive game than he walked. To create this image in pre-Photoshop days, the artist cut into his painting of Brown to reveal a second painting of Dwight D. Eisenhower underneath. The whole thing was then photographed. 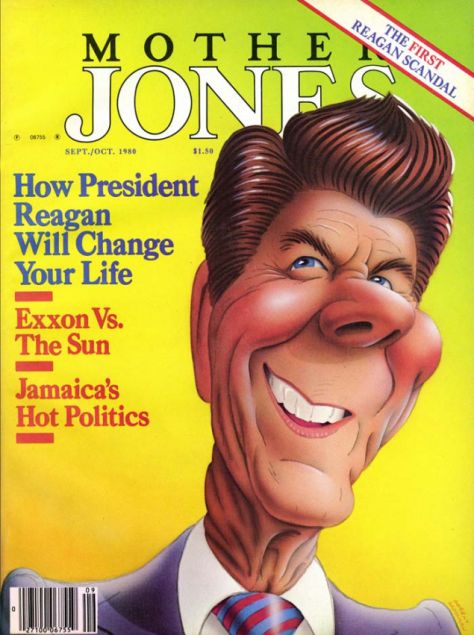 Ronald Reagan, September/October 1980: This cover of a wily Reagan accompanied a story called “President Reagan’s First Four Years,” written before the election that brought him to the Oval Office. Editor Jeffrey Klein followed the future President on the campaign trail and interviewed Reagan appointees, advisers, and foes to report, all too accurately as it turned out, what the next four years would bring. 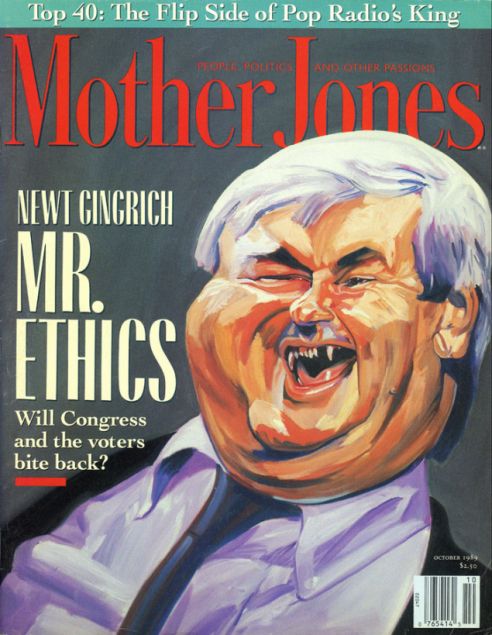 Newt Gingrich, October 1989: Not so subtle, this one! By 1989, Gingrich had become “not only the second most powerful Republican in the House but its self-styled ethics czar as well,” according to the cover story, which recounted how he helped bring down the Democratic Speaker of the House Jim Wright with an inquiry into his speaking fees and book publishing arrangements. The article pointed out that Gingrich was involved in similar lapses, and quoted former aides ready to spill the beans. 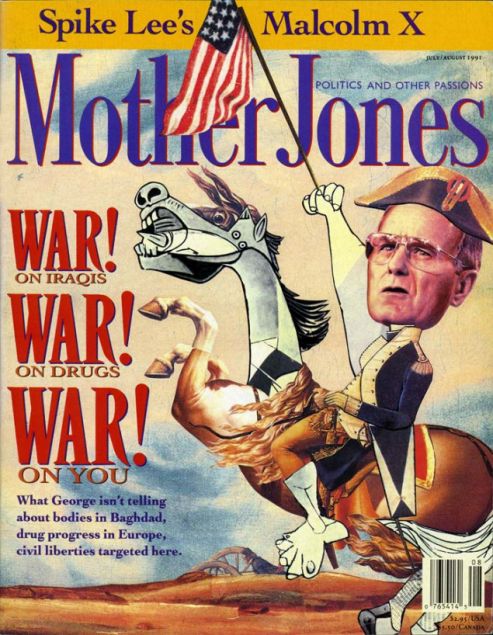 George H. W. Bush, July/August 1991: This collage used imagery from Picasso’s Guernica to help depict the violence that Bush’s War on Drugs did to the body politic. The cover also refers to a related story on the long-term effects of the Gulf War on the people of Iraq. 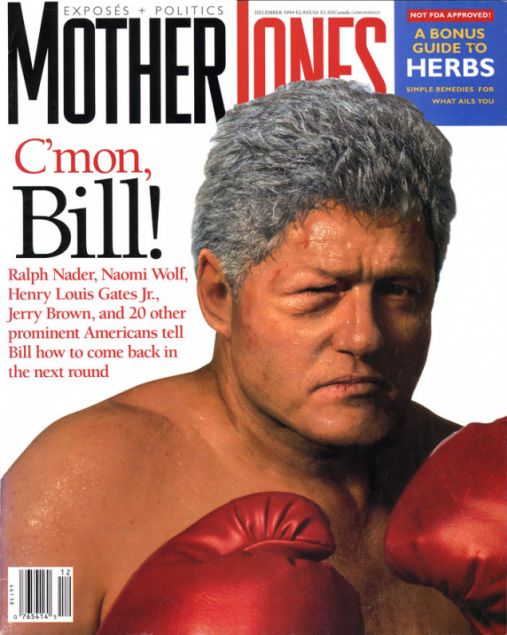 Bill Clinton, November/December 1994: At a time when it seemed that the Clinton administration was being overwhelmed by the defeat of health care reform and the Whitewater and Paula Jones scandals, Mother Jones presented an image of a battered President Clinton, still with his dukes up. The issue carried advice from American writers, activists, and political figures on how he could get up off the mat. 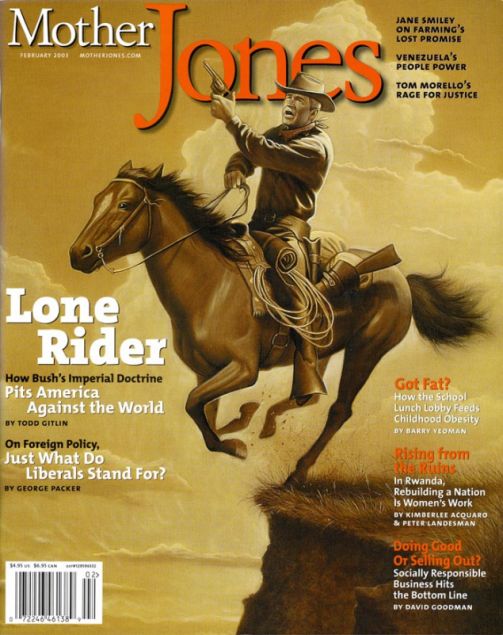 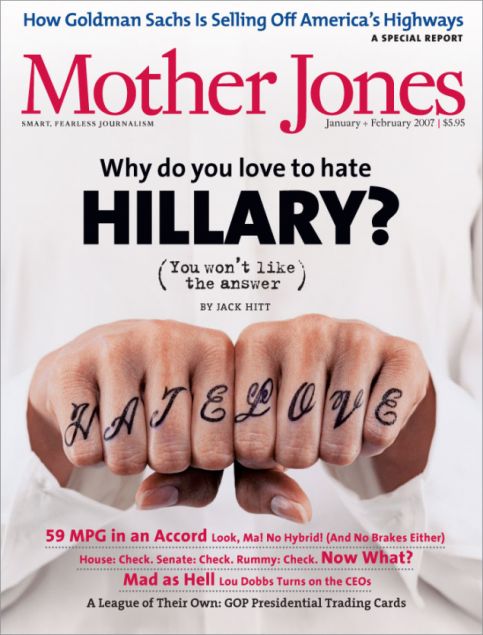 Hillary Clinton, January/February 2007: Since this think piece by Jack Hitt was about the public’s perception of Hillary, rather than the candidate herself, the cover emphasizes the article’s framing by leaving the subject off entirely. 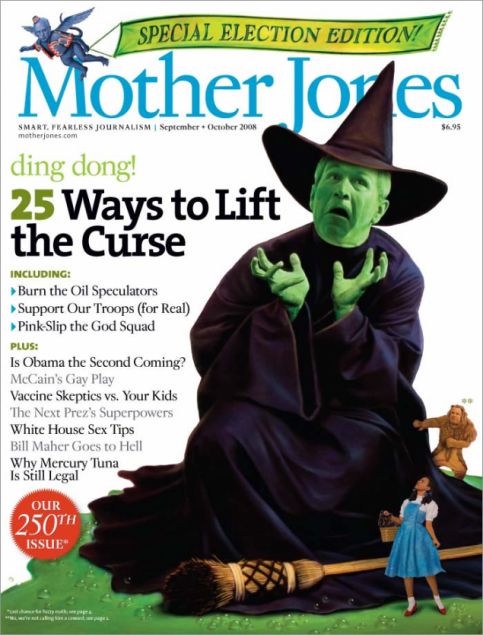 George W. Bush, September/October 2008: This issue contained a powerful portfolio of stories enumerating the failures of the Bush years and suggested how the country might move forward. The president appears as the Wicked Witch of the West from The Wizard of Oz, just as she’s melting. Also featured: Dick Cheney as a winged monkey, Barack Obama working surprisingly well as Dorothy, and John McCain as the Cowardly Lion (to whom the Wizard said, “You’re confusing courage with wisdom.”) 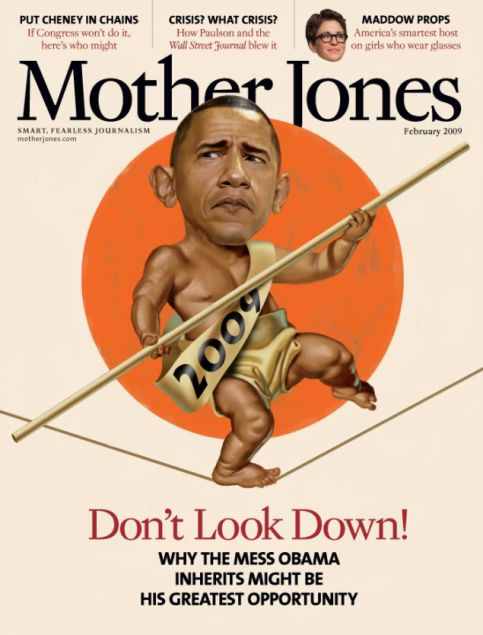 Barack Obama, January/February 2009: A suggestion that we represent newly-elected President Obama as a traditional New Year’s baby led to the late J.C. Leyendecker, who originated that meme by drawing New Year’s babies for the Saturday Evening Post from 1908 to 1943. Our illustrator presented a smart update, depicting a tightrope-walking Obama, worriedly taking his next step in front of the traditional Post circle. 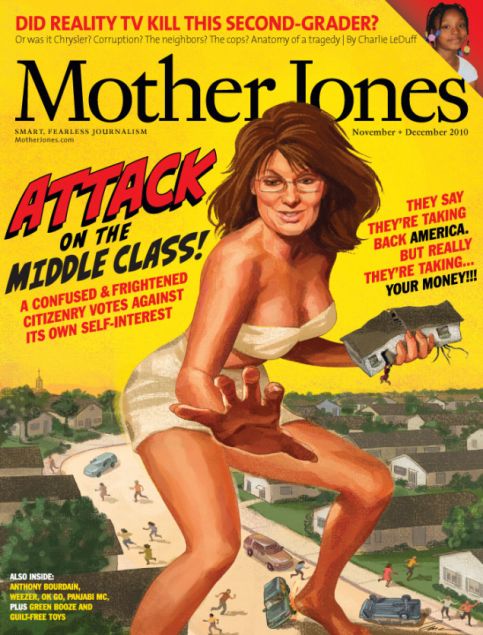 Sarah Palin, November/December 2010: The planning meeting for this cover was one of those times where somebody said an idea, and the only discussion that followed was who we would ask to illustrate it. In this case the idea was “Sarah Palin as The Fifty Foot Woman” and the artist was Zina Saunders. She had done a smart series of McCain/Palin illustrations for the 2008 campaign, combining a masterly painting style (which is actually entirely digital) with a take-no-prisoners attitude. She later created an animation of the fifty-foot-Palin reaching toward the viewer, which was the genesis of the animations that she still does for Mother Jones today.
Creative Director: Tim J Luddy; Illustrator: Zina Saunders