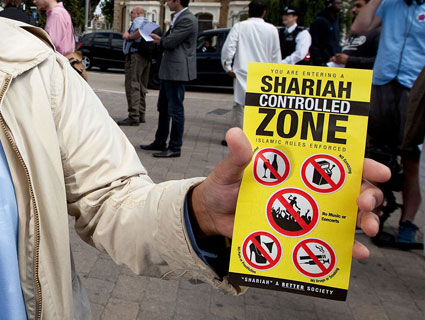 UPDATE: The anti-Shariah legislation is on the schedule for Thursday, the last date of the session. This update said the bill will get a vote, but despite being on the schedule it may not. (Hat Tip: Matthew Schmitz at First Things.)

Republicans in Michigan have fast-tracked a right-wing wish list through the state legislature over the past week, passing a slate of anti-union bills and taking up a slew of anti-abortion legislation, including measures that could force clinics to close, allow hospitals to deny a life-saving abortion, and prevent insurance companies from covering the procedure.

Naturally, it was just a matter of time before Republican lawmakers tried to squeeze a bill to prevent the phantom menace of Taliban-style Islamic law being imposed in the US onto their legislative Christmas list:

A House bill to bar use of “foreign laws that would impair constitutional rights” was on Tuesday’s House agenda. Rep. Dave Agema, R-Grandville, sponsored the bill, which doesn’t specifically mention the Islamic legal code called sharia. However, the bill’s supporters have said they are concerned about the use of sharia spreading.

It wasn’t immediately clear whether a vote would be taken before the lame-duck session ends. Lawmakers have said they would like to wrap up by Thursday, and they focused Tuesday on giving final approval to divisive right-to-work bills that bar unions from collecting mandatory fees from workers they represent under collective-bargaining agreements.

After a similar law that passed in Oklahoma and mentioned Shariah specifically was overturned in the courts, Republican lawmakers in other states, with apparently nothing better to do, have been much more careful about keeping the S-word out of their bills. But there’s little doubt about the purpose of the law proposed in Michigan. Its sponsor, state Rep. Dave Agema, has said that American Muslims “do not want to live under our law” and falsely said that President Barack Obama is a Muslim, which in Agema’s view is bad because he thinks “just about every terrorist is a Muslim.” In 2011, Agema invited Kamal Saleem, a self-proclaimed “ex-terrorist” to speak to the legislature about the threat of Islamic Shariah law, despite significant holes—some of them reported here—in Saleem’s story.

The Associated Press notes that other religious groups in the state, such as the Michigan Catholic Conference, have opposed the bill because it could affect not just Muslims but any religious group that chooses to enter into a contract based on their religious beliefs. Because Michigan has one of the largest Arab and Muslim populations in the country, it has frequently been the target of anti-Muslim paranoia and conspiracy theories; some Republicans have outright proclaimed that parts of the state are under Shariah law.

The question now is whether Michigan Republicans can find time to deal with a nonexistent Shariah takeover when they’re so hard at work crushing unions and curtailing women’s rights.