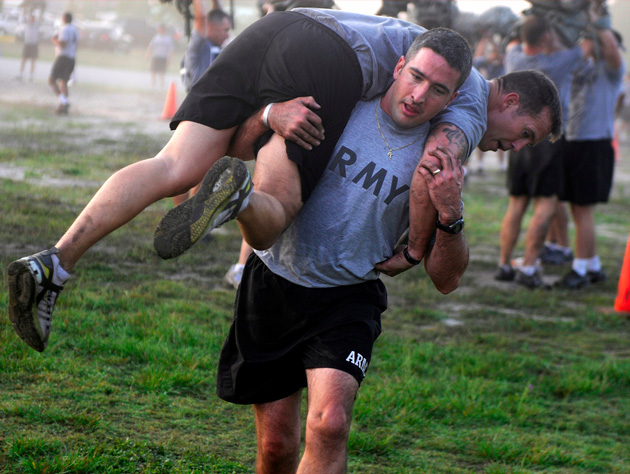 Under intense pressure to trim its budget, the Army is dismissing a rising number of soldiers who do not meet its fitness standards, drawing from a growing pool of troops grappling with obesity.

Obesity is now the leading cause of ineligibility for people who want to join the Army, according to military officials, who see expanding waistlines in the warrior corps as a national security concern.

Londoño reports that discharges for overweight soldiers have busted through the roof (or, if you prefer, through the floor) in recent years: “During the first 10 months of this year, the Army kicked out 1,625 soldiers for being out of shape, nearly 16 times the number eased out for that reason in 2007, the peak of wartime deployment cycles.” (You can find more historical data on Army discharges here.) The Navy, too, is cracking down on physical-test failures, discharging 40 percent more fitness-deficient sailors than in previous years.

Here’s the thing, though: This might be good news for the military.

Failure to meet fitness standards is a perennial Pentagon problem that we reported on years ago. The increase in discharges that Londoño cites could actually reflect a greater willingness among Army brass to tackle the fat problem. And that’s encouraging because, as we reported in 2010, the military in its Don’t Ask, Don’t Tell days was kicking out many more gays than physically unfit soldiers—even though a report commissioned by then-Defense Secretary Robert Gates concluded that soldiers’ sexual orientation had no impact on their readiness for combat. (Unlike, say, their waistlines, muscular endurance, or cardiovascular ability.)

Today’s cuts are being spurred largely by financial pressures: Whether or not the US plunges off the so-called fiscal cliff, the military needs to reduce active-duty force levels, and getting rid of the least-fit recruits is one speedy way to do it. That does raise some legitimate questions, such as whether the services’ height-weight standards and physical-fitness tests (a run, sit-ups, and pushups or pull-ups) are biased against the overmuscled or combat-wounded.

But “unsat” troops have plenty of resources to encourage their personal improvement and retention, including the Army’s recently developed “Weigh to Stay” program. Before DADT’s repeal, gays and lesbians had no such support from the military establishment. As one Army officer told MJ in 2010, the overweight historically were first in line to get a pass from the brass. “Some people,” the officer said, “really are too big to fail.”