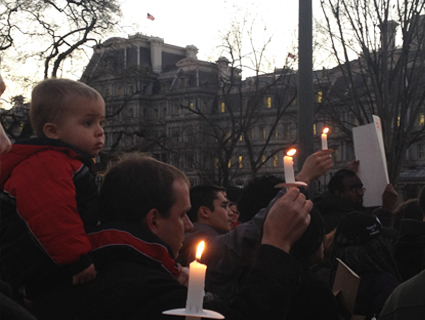 As we sat in horror Friday morning watching the details of the Newtown school shootings emerge, one question kept pushing through the anger, the grief, the ache to go hug our own kids: What would it take? What, after Columbine, Virginia Tech, Aurora, the Sikh temple shooting, and so many others, what would it take for the nation to grapple with the fact that our gun policy is the equivalent of leaving your gun cabinet unlocked with a “Murderers Help Yourself” sign on it? President Obama is right: We can’t say we’re powerless in the face of such carnage, or that the politics are too hard, or that such violence visited on our children year after year after year is somehow the price of our freedom. But what then must we do?

Gun control may be famously intractable, but it doesn’t take a genius to spot a few key correlations:

Many Americans are in agreement, in principle, on point 4. So what would it take for that agreement to translate into action in the face of one of the most powerful lobbies the world has ever seen? What has it taken in the past to change the seemingly unchangeable, from slavery and child labor to the disenfranchisement of women and minorities?

Lots of things, but one in particular: a group of people drawn together, often by a particular tragedy, who respond by putting themselves on the front lines. A group whose determination and bravery in the face of threats both physical and political inspires or shames others to join them, adding strength and numbers until the status quo can no longer hold. A force that renders the pundits’ “it’ll never happen” irrelevant.

What would such a movement look like, arising out of Newtown? Would it be mothers—of those slain children, or those who never want to find themselves in their place—donning black and holding candlelight vigils each Friday night? Would it be fathers, siblings, loved ones of children murdered in schools and shopping malls and their own living rooms across the nation, taking to Facebook and to the National Mall? Would it look like Argentina’s Madres de la Plaza de Mayo, who dared the world to forget their disappeared kids? Would such a movement take a page from Mary Harris “Mother” Jones, who led 200 children, some missing limbs from mining accidents, in a march on Teddy Roosevelt’s home? Instead of “We Want to Go to School and Not the Mines,” would the placards read “We Want to Be Safe at School”? Yes, it might sometimes appear corny, sometimes crude, sometimes cringe-worthy, but movements that make a difference are sometimes all those things. They engage the gut as well as the brain. They batter down cynicism and conventional wisdom and groupthink, and they take on the merchants of doom.

Gun politics is the politics of fear, as weapons manufacturers, the National Rifle Association, and their allies know all too well. Over the past decade, they have tapped fear of crime, of terrorism, and even of the kind of massacre we saw at Newtown to fuel a wave of state laws that make it easier for more and more people to possess more and more powerful weapons—and take them everywhere including bars and schools.

It’s worth noting that despite much talk about how many guns there are in America (and how their number, as a result, can never be reduced), the number of people owning guns is actually in a long-term decline. It’s not that millions of us are falling in love with cold, hard steel; it’s that those who already own firearms are arming themselves more heavily. And is it any wonder, when media moguls like Rupert Murdoch, while calling for gun limits themselves, blanket the airwaves with rhetoric about a “despotic” (cough *black* cough) president getting ready to seize our weapons along with our freedom?

Fear = sales and donations. Sales and donations = money to spend on lobbying, mobilizing, and political contributions = political sway. Political sway = further gun law rollbacks, which make make it easier for crazy people to do unspeakable acts, and the fear spreads. It’s time to start calling out those who, actively or passively, perpetuate that cycle.

Gun extremism does a disservice, most notably, to millions of responsible firearms owners—including a majority of NRA members—who’ve already bucked the group’s orthodoxy by telling GOP pollster Frank Luntz that they support background checks for weapons buyers. Will they be willing to go further—to embrace or tolerate, say, an end to gun show loopholes, a restoration and improvement of the assault weapons ban, or any of the other measures that nations throughout the world have taken without descending into dictatorship or zombie mob rule? (And yes, tragedy may strike no matter how strict your gun laws, as Norway and Germany have seen. But no country sees them as often as ours. This is one ranking where we’d all be proud to not be No. 1.)

There is much debate to be had about what an American version of gun sanity might look like. Should we ban certain kinds of guns? High-capacity clips? Regulate ammo? Make certain funding to states dependent on solid gun enforcement, as we did with drunk driving and highway money? Define what a “well regulated militia” means in this day and age? Any or all of those things might be right for us, but we haven’t been able to have the debate because the NRA has ostracized the mere thought as America-hating.

And yet—and yet, we may have already seen the peak of that kind of demagoguery. The NRA spent nearly $11 million in the November election; only six candidates it backed (a total of 1 percent) won. That’s a 0.83 percent return on investment. In just 48 hours after news of Newtown broke, 140,000 people signed a White House petition demanding legislation that “limits access to guns”; record numbers of people turned in their weapons at buyback programs this Saturday. It’s true that past massacres have not moved the needle of public opinion—but events, by themselves, never do. It takes people acting on those events: the slow, grueling work of changing the unchangeable. As with other big shifts, most recently perhaps on marriage equality, we may one day look back and realize that the tectonic plates began to move long before we saw it happen.

America’s mothers, fathers, sisters, brothers, and classmates are ready to consider what might prevent the next Newtown. The president, judging from his speech last night, is willing to act, but without a deafening roar of public anger at his back, he can’t get far on Capitol Hill. Will Sandy Hook go down in history as another senseless tragedy—or as the moment that catalyzed a movement?