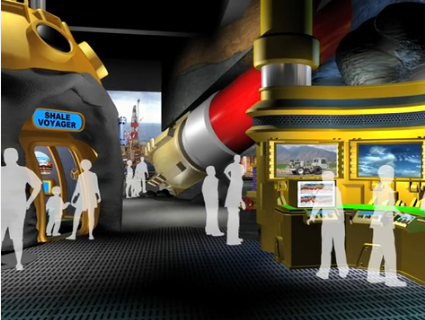 An artist's rendering of the Perot Museum's fracking-themed Shale Voyager exhibit.Perot Museum of Nature and Science

If oil companies designed the lessons contained in middle school science textbooks, it would be a national scandal. But helping to design scientific displays in natural history museums that host countless school field trips each year? Apparently, that’s just fine.

Take the shiny new Perot Museum of Nature and Science (yes, as in former presidential candidate H. Ross), which opened in Dallas on Saturday. A $10-million donation from Hunt Petroleum (now owned by Exxon) helped finance the museum’s Hunt Energy Hall, where exhibits include a larger-than-life drillbit cutting through a slab of faux rock, and a fracking-themed virtual reality experience known as the Shale Voyager. The New York Times‘ Edward Rothstein got a preview:

The Hunt Hall has its virtues. Some science centers treat environmentalism with almost devout attention, eager to drive home homilies, so it is a novelty to see it treated in this hall, as it is in other parts of the Perot, as one subject among many. It is refreshing as well to see some attention devoted to the engineering difficulties in the extraction of oil and get some idea of the science, however awkwardly presented.

But it is almost bizarre to see a major exhibit about energy whose central focus is on fracking and its machinery, even if the process ultimately transforms American energy production. We also get little sense of the controversies and debates that now fuel any examination of the energy issue. Even if the hall is meant to reflect Texan preoccupations, we learn in only a small part of a display case that “Texas produces more wind energy than any other state in the U.S.”

The Perot Museum is far from the only one pumping up fossil fuels. Forth Worth’s Museum of Science and History features the XTO Energy Gallery, named after the eponymous Barnett Shale fracking outfit. And in North Dakota, fracking billionaire Harold Hamm has shelled out $1.8 million to help construct a new wing of the North Dakota Heritage Center that will include an exhibit on—you guessed it—fracking.

These relationships might seem less problematic if the museums actually built firewalls between their fundraising and curatorial departments. I don’t know how things work at the museums in Dallas and Fort Worth, but when I visited the North Dakota Heritage Center earlier this year, museum staff told me that they’d sought Hamm’s input on the content of their energy exhibits. This brings to mind the kind of “science” espoused by the Creation Museum—the transmutation of opinion and faith into “fact” through the magic of pseudo-scientific dioramas.

Hamm and Perot Musuem donors T. Boone Pickens and Trevor Rees-Jones represent a new generation of philanthropically inclined Texas oil magnates. But while their names are showing up on a lot of buildings, they haven’t begun to build the kind of legacies left by, say, the Whitneys or the de Menils—families that underwrote world-famous art museums in New York and Houston. Funding fracking exhibits might be a good PR move, but in the long run, the best PR is the kind that lacks an obvious political agenda.