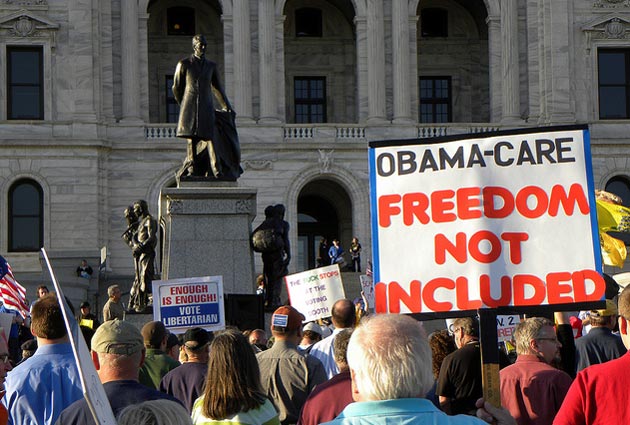 The opponents of the Affordable Care Act (better known as Obamacare) have had a bad year. First, the Supreme Court rejected the major legal challenge to the law in June. Then, ACA opponents’ favored presidential candidate, Mitt Romney, who’d pledged to work for repeal as president, lost his bid for the White House. But Obamacare’s foes are undaunted. Tea partiers and other conservatives are continuing their Quixotic battle against the law.

Obamacare opponents’ latest target is the law’s provision for a health insurance “exchange,” which will serve as an online marketplace for heavily regulated insurance policies that individuals and small businesses will be able to purchase with federal subsidies. The exchanges are required to be ready for enrollment by October of next year. Yet since Congress passed the ACA in 2010, many states have simply refused to start laying the groundwork needed to create the exchanges, including rejecting millions of dollars of federal planning money to help get them up and running.

Some states, including Florida and Virginia, were so convinced in the rightness of their legal arguments that they never made a contingency plan for what might happen if the Supreme Court upheld the law. Now legal deadlines are fast approaching, and the states will either have to set up an exchange on the fly or let the feds do it for them. The Obama administration has already extended the deadline for making that decision twice, giving the scofflaw states more time to get with the program. But the final deadline for deciding whether to create a state or federally run exchange is coming up on Friday, and tea partiers see the next few days as a key opportunity to gum up the works and hinder the health care law’s implementation.

Tea Party Patriots, one of the last remaining national tea party organizations, is urging its members to pressure their state governments to reject the state-based exchanges as a way of undermining the health care law. They explained the plan in their newsletter this week:

Because of how quickly the law was rammed through, many experts are saying that the federal government doesn’t’t have the resources to set up numerous exchanges in the states. Right now 17 states have decided to opt out of setting up an exchange and there are currently 9 that remain undecided. The more states that opt out of the state-based exchanges, the harder it will be for the federal government to fully implement Obamacare and the more likely it will be that we can turn back the clock and re-frame the health care debate. The time to put pressure on the federal government in regard to Obamacare has come to an end for now and it is time to shift our focus on the states.

Many red states, including Arizona, Kansas, and much of the South, have already landed on the default option and are forcing the federal government to run their exchanges. But there are still a handful of states that haven’t officially decided, including Florida, where tea partiers often exercise outsized influence.

Whether the tea party’s latest strategy for obstructing Obamacare will work is an open question. But it does put the grassroots activists in an unusual position of advocating for the federal government to take over a state function, something the tea party movement as a whole seems constitutionally opposed to. After all, a lot of tea partiers would like to see the federal government turn pretty much everything but national defense over to the states, which they think can do a better job. By fighting state-based exchanges, the tea partiers may inadvertently be helping create the very sort of federalized health care system they’ve spent the past three years fighting to prevent.

On Monday, Tennessee, a big tea party state, became the latest state to opt out of creating its own exchange. Critics of the decision pointed out some of the problems in the tea party’s strategy. “Contrary to some of the rhetoric, declining to run an exchange does not keep Obamacare from coming into Tennessee. It merely cedes any ability or control we could have had in the decision-making process to the federal government,” Brad Palmertree, the interim executive director of the Tennessee Health Care Campaign, a nonprofit, told The Tennessean.