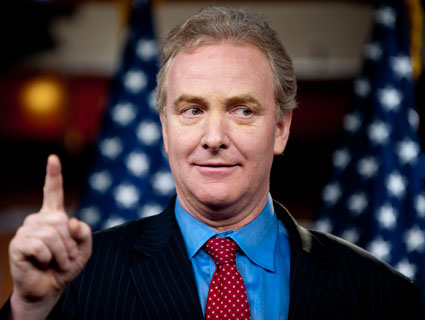 Lately, it has been looking more and more likely that America is about to lurch over the fiscal cliff, or fiscal staircase, or fiscal curb, or whatever, due to GOP obstructionism. On Friday, there was a tad more hope on the Hill as congressional leaders met with President Obama to try and come up with some sort of last-minute deal to at least partially avert the $400 billion in across-the-board tax increases and $200 billion in spending cuts set to go into effect January 1. To provide a kick in the pants to their fellow members of Congress, Sen. Tom Harkin (D-Iowa) and Rep. Chris Van Hollen (D-Md.) rallied with dozens of working class folks outside the Capitol Friday to push for a stop-gap measure that would spare the middle class and working poor from tax hikes and expiring unemployment benefits.

An unemployed maintenance technician, a former actress, a teacher, some grandmas with kids in tow, and a nun (of Nuns on the Bus) were in attendance, holding signs that read “Middle Class Over Millionaires” and “Republicans: Don’t Drop The Ball on the Middle Class.”

Van Hollen blasted House Speaker John Boehner for refusing to “let democracy work,” by not allowing the House to take a vote on any debt deal unless a majority of his own caucus will back it. (Last week, Boehner, unable to line up enough GOP support, was forced to pull his so-called Plan B proposal to avert the fiscal cliff.) Boehner “has turned the keys to the car over to the tea party caucus…to the most extreme members of the House Republican caucus,” Van Hollen said.

Harkin slammed the GOP for having voted for the 2001 Bush tax cuts which they knew would expire after ten years, and now fighting to prevent the end of those cuts. “Now Republicans are holding the country hostage so that the wealthy don’t have to pay more.”

Sorie Koroma, an unemployed guy from Prince George’s County, Maryland, hoped the rally would get Congress to listen to regular Americans in the eleventh hour. “I’m here to give my own voice,” he said, “so these people will take a vote on the fiscal cliff so the middle class won’t be harmed.”

As House and Senate leaders met to scrape together a make-or-break compromise Friday, Van Hollen said he’s “more hopeful than I was 24 hours ago. But we’ve still got a long path” in the next few days.

Negotiations have shifted for now to the Senate, and the House, which is currently on vacation, will come back into session Sunday night. As the New York Times puts it, “With the possibility of New Year’s Eve floor festivities looming, Congress could find itself voting on the final day of the year for the first time in more than four decades.”