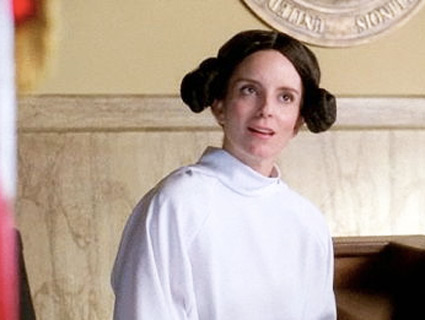 After six years on the air, Tina Fey’s beloved NBC comedy is ending its run with an hourlong series finale. The series, which is set behind the scenes at an Saturday Night Live-like sketch comedy show, earned a devoted fanbase with its cultural satire and rapid-fire wit. 30 Rock premiered on NBC in 2006, just as the network was launching Aaron Sorkin‘s highly anticipated drama Studio 60 on the Sunset Strip—another series revolving around a fictional sketch comedy program. Strangely enough, it was Sorkin’s hugely political Studio 60 that tanked, while Fey’s goofier series became the award-winning critical hit. (As a sidenote, it’s worth remembering that when Tina Fey first pitched the show, her original idea was basically the same premise behind Sorkin’s latest series, The Newsroom.)

30 Rock was also often political in its humor. It was just rarely—if ever—preachy about it. And the world was better for it: In its seven seasons, 30 Rock produced some of the sharpest political satire seen on American television in recent years. This is part of why Fey—who created the series and plays the lovably nerdish Liz Lemon—won the Kennedy Center’s Mark Twain Prize for American Humor in 2010, which is sort of a big deal (past recipients include Richard Pryor, Lily Tomlin, and George Carlin).

For those who haven’t read it, Jonah Weiner wrote a piece for Slate in 2009 titled “I Want To GOP to There“—a clever play on a popular Liz Lemon catchphrase—that analyzed the show’s lampooning of conservative and liberal politics. It’s a good starting point, but here’s more: a short political history of 30 Rock. Targets include neoconservatism, CNBC, birtherism, and liberal Hollywood.

You might have heard that House Minority Leader Nancy Pelosi appears in the final episode. Two other famous politicians stopped by the set to poke fun at themselves:

“the Committee to Re-invade Vietnam”

In the 2008 episode “Subway Hero,” Jack convinces Tracy Jordan (Tracy Morgan) to star in this political ad aimed at convincing black Americans not to vote in the 2008 election. The ad is paid for by the Committee To Re-invade Vietnam:

NYC mayor Michael Bloomberg makes a cameo in this episode. The episode also features this instance of terse real talk from Dot Com (played by Kevin Brown), who responds to Jack’s assertion that African-American voters should support the GOP because Lincoln freed the slaves: “Actually, today’s Republican party would be unrecognizable to Lincoln. He fought a war to preserve federal authority over the states. That’s not exactly small government.”

In season 2, Jack leaves GE and NBC to work in the Bush administration. He contributes to the development of a chemical “gay bomb,” a weapon designed to make enemy forces go gay for each other, which would then help America win the global War on Terror. This might sound like an over-the-top or immature attempt at humor—until you realize that the gay bomb is based on a real idea developed in the mid-1990s by the United States Air Force.

Anyway, the chemical is accidentally released in the Pentagon, and Jack engages in an involuntary homosexual sexcapade with Vice President Dick Cheney. 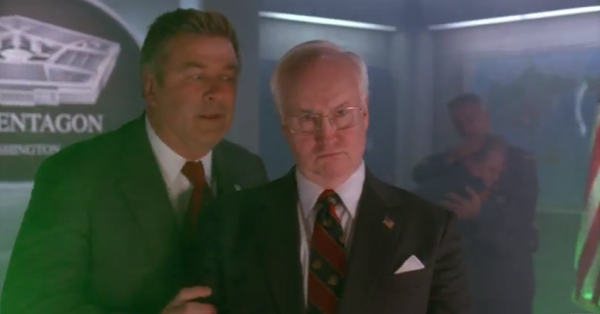 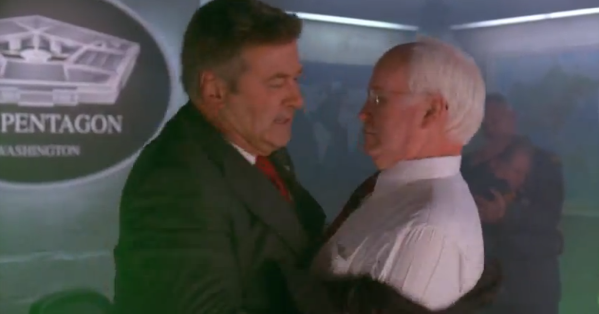 In the first-season episode “Hard Ball,” the vain, dumb, and mostly heartless Jenna Maroney (Jane Krakowski) went on MSNBC’s Hardball with Chris Matthews in an effort to clear her name after being misquoted about hating America’s armed forces. The liberal Chris Matthews and the conservative Tucker Carlson played themselves.

This happens when Jenna tries to say on live TV that she’s voting for Barack Obama in the 2008 election:

Austin is also a crazy person who doesn’t like the Jews and supports re-legalizing slavery in America. He also makes up awful songs:

cnbc gets the ’30 rock’ treatment

For three seasons, Elizabeth Banks played Avery Jessup, a slick CNBC host who hates American liberalism just as badly as Jack does. (The two end up married, having a child together, and eventually divorced.)

Think of Avery as a female Larry Kudlow. Here’s her first appearance on 30 Rock:

Jack, the consummate capitalist playboy, is obsessed with the 40th President of the United States. In season five Jack coins the term “Reaganing,” which means the act of having a perfect day. He explains:

Making through a full 24 hours without a single misstep is called “Reaganing.” The only other people who have ever done it, Lee Iacocca, Jack Welch, and—no judgment—Saddam Hussein.

The show lasted long enough to take on the 2012 election. In the 30 Rock universe, Republican VP nominee Paul Ryan is dropped from the ticket after it is revealed that he was born in Kenya (hardly the first time the series mocked birther conspiracy theories). Jack confabs regularly with Rafalca (Ann Romney’s dressage horse), who informs him through horse-speak that Mitt Romney‘s new choice for running mate is imminent.

Romney’s new running mate turns out to be Gov. Bob Dunston, a crude, inept, and ultra-conservative Southern conservative. For Tracy Jordan, Dunston becomes the Sarah Palin to his Tina Fey:

Early in season two, Liz gets her post-9/11-paranoia on.

After Liz suspects her new neighbor Raheem (SNL’s Fred Armisen) of being a Muslim terrorist, she turns him in to the authorities. He is promptly tortured by the American government in all the post-9/11 ways you’d expect. It’s revealed that Raheem actually loved America and wasn’t any kind of terrorist at all. After undergoing some heavy-duty enhanced interrogation, Raheem turns to a life of Islamic jihad. And so it was that über-liberal Liz Lemon helped create the next OBL: