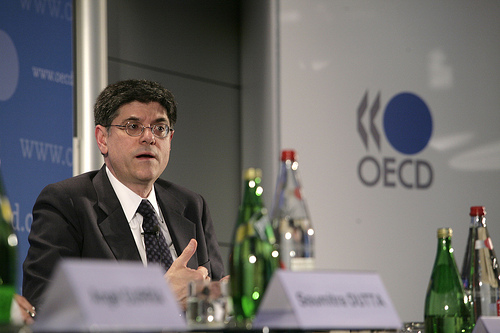 President Barack Obama is expected to nominate Jack Lew, the wonky White House chief of staff and former director of the Office of Management and Budget, as the new secretary of the US Treasury. The current secretary, Tim Geithner, plans to step down soon.

Here’s a crucial piece of information about Lew: He has said he doesn’t believe financial deregulation was a major cause of the financial crisis. In 2010, Lew testified before Congress that the deregulation of Wall Street in the Clinton era—the repeal of Glass-Steagall, say, or the ending of real regulation of complex derivatives—wasn’t a critical factor. “The problems in the financial industry preceded deregulation,” Lew told members of the Senate budget committee in September 2010. He added that he didn’t “personally know the extent to which deregulation drove it, but I don’t believe that deregulation was the proximate cause.”

Lew knows that period of deregulatory zeal well, having served as President Bill Clinton’s director of the Office of Management and Budget from May 1998 to January 2001. Lew has spent much of his career in government, is a savvy negotiator and budget wonk, and is respected by Republicans and Democrats. Republicans, though, have been grumbling about him more recently—after all, in 2011, he outsmarted the congressional GOP in intense budget talks. And liberals have criticized Lew for his post-Clinton work for the mega-bank Citigroup, where he ran a unit that profited off shorting the housing market.

Lew’s 2010 claim that deregulation wasn’t a major cause of the financial crisis is disputed by many experts as well as the government’s own investigatory body, the Financial Crisis Inquiry Commission. In its final report (PDF), the commission stated that “widespread failures in financial regulation and supervision proved devastating to the stability of the nation’s financial markets.”

The commission went on to conclude, “More than 30 years of deregulation and reliance on self-regulation by financial institutions, championed by former Federal Reserve chairman Alan Greenspan and others, supported by successive administrations and Congresses, and actively pushed by the powerful financial industry at every turn, had stripped away key safeguards, which could have helped avoid catastrophe.”

Obama, Lew’s boss, has said before that deregulation played a major part of the financial meltdown. In October 2008, Obama, then the Democratic candidate for president, said “we know that it’s because of deregulation that Wall Street was able to engage in the kind of irresponsible actions that have caused this financial crisis.”

Upon signing the Dodd-Frank financial reform bill, which was chock-full of new regulations, in July 2010, Obama noted the failure of the regulators and the banks: “It was a crisis born of a failure of responsibility from certain corners of Wall Street to the halls of power in Washington. For years, our financial sector was governed by antiquated and poorly enforced rules that allowed some to game the system and take risks that endangered the entire economy.”

It’s clear Obama believes deregulation played a role in the crisis. Apparently, he’s fine with a treasury secretary who’s a former Clintonite not eager to acknowledge the Clinton era’s mistakes.