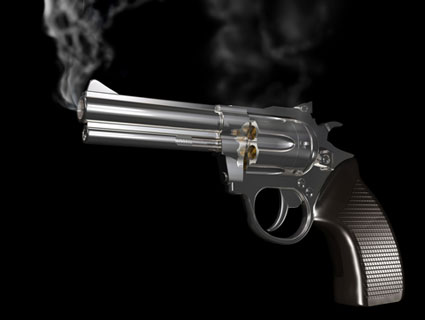 The most ubiquitous danger at firing ranges has a lot to do with bullets but nothing to do with getting shot.

It’s all in the lead. A recent report from the National Academy of Sciences found that OSHA lead exposure standards are too lax to protect military firing range employees. Repeated exposure to the toxic metal causes a raft of health problems including brain damage, high blood pressure, and anemia.

Lead is found in bullets as well as the explosive that ignites gunpowder. When a bullet is fired, it gets so hot that that lead actually vaporizes. Firing range employees breathe in the lead fumes, as well as ingest lead dust that settles on their body and clothes. OSHA sets the permissible level of atmospheric lead at 50 micrograms/meter2, but the report found that level frequently exceeded at military firing ranges, sometimes by several orders of magnitude.

The new report also finds OSHA’s blood lead level recommendation of 40 µg/dL or lower to be too high. That limit hasn’t changed since 1978, but subsequent research has found health problems at blood lead levels as low as 5 µg/dL. Lead is so damaging because it mimics calcium, an ion with essential roles everywhere in the body from bones to nerve cells. (It’s especially dangerous for children with developing brains, which is why you hear so much about lead paint.) The report devotes more than 70 pages to detailing lead’s many toxic effects in nearly every organ in the body, including the brain, blood, kidneys, heart, and reproductive organs.

How can firing range workers reduce their exposure? The most direct solution is switching to lead-free ammunition or at least jacketed bullets, which have a lead core covered with a coating made of copper or nylon. Lead has been traditionally favored because of its density, but the military has since developed lead-free ammunition that reportedly works just as well.

If OSHA adopts more stringent standards, it would be just another step in the long incremental march toward recognizing lead’s dangers. Over the past several decades, the Centers for Disease Control and Prevention has lowered the blood lead level of concern in children from 60 µg/dL to 25 to 10 to its current 5, and the metal has largely vanished from gasoline, water pipes, tin cans, and paint.

That’s great, but lead is an element, so it doesn’t degrade or become less toxic over time. Old bullets (or paint or gas or any other cause) leach lead into the soil; from there the metal gets into groundwater and plants and the bodies of animals. The military has been cleaning up some 700 of its shooting ranges, and while that’s not cheap, Kevin Drum’s “America’s Real Criminal Element: Lead” makes a compelling case that it’s far less expensive than the costs that come with lead exposure—including violent crime, lower IQs, and ADHD.

In any case, the lessons learned from cleaning up firing ranges are relevant even if you have never owned a gun or live nowhere near a firing range. That’s because soil lead is actually as ubiquitous of a public-health hazard as the better publicized problem of lead paint. If you live in a city, chances are your house is surrounded by soil with fairly high levels of lead. To find out more about the risk you face, read “Is There Lead in Your House?“—also in the January/February 2013 issue of Mother Jones.