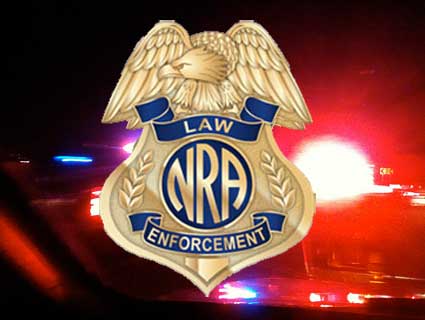 On May 20, 2010, on a highway in West Memphis, Arkansas, a father and son armed with a handgun and AK-47 assault rifle pumped 14 bullets into a police officer who’d pulled over their minivan on a routine traffic stop. The dead cop’s partner took cover in his squad car but the AK-47 sliced through it and killed him too. A county sheriff and his chief deputy responded and were also hit. The last man standing was state wildlife officer Michael K. Neal, who sped his patrol car through the carnage, rammed the minivan, and opened fire through his broken windshield with an M-4 carbine. Within minutes, the suspects were dead.

Gun control advocates held up the horrific episode as a textbook argument for banning assault rifles. Officer Neal, meanwhile, soon found himself at a Virginia meeting of the National Rifle Association, accepting its “Officer of the Year” award—and a complimentary Smith & Wesson pistol.

Awards and prizes are just one way that the NRA reaches out to law enforcement, a constituency that’s shaping up as a key voice in the debate over gun control. In 2011, the gun group launched a slick recruiting program called NRA Life of Duty, which offers complimentary memberships and insurance benefits, training opportunities, and steep product discounts to public safety officers and members of the military. The cost of these premium memberships are covered by individual and corporate sponsors such as the gun maker Colt’s Manufacturing, firearms supply house Brownells, and the weapons training company Tactical Response—whose CEO, James Yeager, recently went ballistic on YouTube. (Yeager earnestly claimed that he was “going to start killing people” if the government went “one inch further” in its gun restrictions—a tirade that prompted Tennessee to suspend his handgun carry permit.)

In addition to free subscriptions to all of the NRA’s magazines and the standard benefits offered to civilian members, Life of Duty members receive $27,500 in free accident insurance coverage and steeper product discounts than civilians are offered—45 percent off hunting and camping products from Browning and Alps Mountaineering, for instance, and big savings on gear at Brownells’ PoliceStore.com.

The bennies don’t end there: If a law enforcement Life of Duty member is killed on duty, the widow or widower gets a $25,000 life insurance payout, and the children qualify for college scholarships worth up to $8,000. For $50 a year, retired cops can purchase insurance through the NRA that covers up to $25,000 in legal costs should they be sued after shooting someone in “self defense.”

The NRA’s police recruitment efforts date back decades. In 1960, the NRA launched a Law Enforcement Division that has managed to integrate itself into police operations and culture at federal, state, and local levels. A so-called “agency affiliation” qualifies police agencies to receive technical and legal advice on their firearm-training curriculums, and help from the NRA’s “Range Development Department” in designing their firing ranges—a tax-exempt NRA foundation even helps pay for such things. There’s the NRA’s National Police Shooting Championships, which it promotes as “the most prestigious police shooting championship in the world.”

“The NRA has ingratiated itself with the rank and file. It is very masterful.”

All of this outreach seems to pay off. The NRA uses its popularity among police officers to justify its gun-friendly stance on crime prevention. “We have 80,000 police families in the NRA,” CEO Wayne LaPierre told the Senate Judiciary Committee yesterday. “We care about safety.”

“The NRA has ingratiated itself with the rank and file. It is very masterful,” says Scott Knight, the police chief in Chaska, a town outside of Minneapolis.

Indeed, while many police agencies favor tighter gun restrictions, the majority of rank-and-file cops now oppose them. Some 84 percent of police officers who responded to a December reader survey by Police Magazine, a publication aimed at law enforcement officers, said restricting the sale of assault weapons would not reduce the number of mass shootings such as the Newton fiasco.

Knight, one of the original co-chairs of the National Law Enforcement Partnership to Prevent Gun Violence—a coalition of nine national police groups that favor gun control—says he doesn’t think the NRA actually cares about cops. He was once a member himself, but dropped out after the gun lobby fought restrictions on Teflon-coated “cop killer” bullets, which are capable of piercing police body armor. “I call it window dressing, a facade. It is all part of a shell game being played on the American public,” he says.

Not content to lobby simply under its own banner, the NRA has also created the Law Enforcement Alliance of America, a group of “law enforcement professionals, crime victims, and concerned citizens” that opposes gun control measures. LEAA grew out of a similar organization founded in the late ’80s by Leroy Pyle, a firearms expert with the police department in San Jose, California. Pyle offered free membership to cops and charged everyone else $25. After he was disciplined by the department for his gun activism, the NRA named him “Man of the Year” and provided him with seed money, a bank account, and office space.

“The majority of policeman, I guarantee you, are pro-gun-ownership,” says Leroy Pyle, whose group was taken over by the NRA.

About a year later, though, Pyle was forced out of the leadership by NRA higher-ups who believed that the group needed to broaden its focus beyond Second Amendment issues and include things such as “rape prevention techniques,” Pyle told me. The group remained active through the early aughts, when it claimed to represent “75,000 members and supporters.” More recently, it has functioned as a dark-money group that pushes conservative candidates. Last year, for example, it poured nearly $500,000 into an “education campaign” that helped elect a pro-tort-reform judge to the Mississippi Supreme Court.

There’s little doubt that many police officers would identify with the NRA’s politics even if it didn’t work hard to buy their support—besides being a fairly conservative lot, cops are accustomed to protecting themselves with guns. “If you want to know what a real policeman thinks about gun ownership,” Pyle says, “ask him if he wasn’t a policeman tomorrow would he have a gun at home? The answer is just too obvious. Anytime you have a policeman standing up saying citizens should not have a gun, you have got the wrong policeman.”

Support for gun control is much stronger among big-city police chiefs, several of whom met with President Obama on Monday to discuss firearms regulation. Knight’s coalition, for instance, includes the Major Cities Chiefs Association and the International Association of Chiefs of Police.

Conspicuously absent from the partnership, though, is the National Sheriffs’ Association, whose members mostly represent pro-gun rural areas. “There is a difference in how police see this issue in inner-city, rural, and suburban environments, and those differences are connected more to cultures in America than they are to opposition in policing,” says Jim Bueermann, a former police chief and the president of the Police Foundation, a nonpartisan crime policy research group.

Pyle agrees—well, sort of. “The majority of policemen, I guarantee you, are pro-gun-ownership,” he says. “Now if you sit them down over a beer and start talking about particulars—how many rounds, how long should the gun be—you are going to have as many different opinions as any other drunk.”

The NRA clearly aims to win many more police officers to its side. Its efforts may help contribute to a view among cops that there’s really only one acceptable perspective on the matter. “I hope you get it right,” Pyle told me, perfectly deadpan. “But if you don’t, I will hunt you down and kill you.”

He was joking. I think.