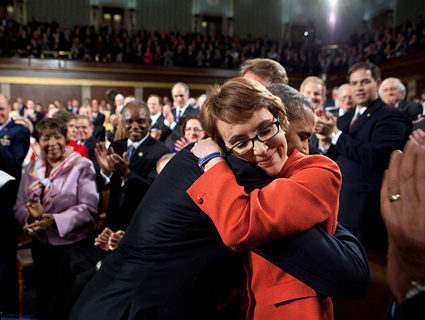 By Thursday afternoon, it was clear that Vice President Joe Biden’s charms weren’t going to be enough to persuade the National Rifle Association to get on board with gun control legislation. Following a 95-minute summit at the White House, the NRA issued a curt press release vowing never to surrender. “We were disappointed with how little this meeting had to do with keeping our children safe and how much it had to do with an agenda to attack the Second Amendment,” the organization said. Instead, the nation’s leading gun group pledged to take its “commitment and meaningful contributions” to Congress.

Fortunately for the White House, there’s a Plan B. Just one day earlier, Biden signaled that the White House might take unilateral steps on gun control, noting “there are executive orders, executive action that can be taken.” What those steps were, Biden wouldn’t say. But we’ve got a pretty good idea. Here are 14 proposals, all endorsed by leading gun control advocates—and in some cases, even the NRA—that the White House and its subordinate agencies could push through on their own:

1. Actually appoint a full-time ATF director: Most of the executive branch’s gun control powers require a functioning Bureau of Alcohol, Tobacco, Firearms, and Explosives—something that’s not possible without anyone to run it. The ATF hasn’t had a permanent director for six years, as a result of a deliberate reorganizing shuffle that gave the Senate veto power over new appointees. Instead, it’s had a series of part-time directors. The current interim director, Todd Jones, commutes to Washington from Minnesota, where he works as a US Attorney.

2. Actually prosecute people who try to buy guns illegally: Finally, some common ground. In the same press release in which it blasted the administration’s push for gun control, the NRA reiterated its support for the “enforcement of existing laws against violent offenders to reduce crime.” It sounds straightforward, but it’s not what usually happens. In 2009, about 71,000 people who were legally prohibited from purchasing guns tried to obtain them anyway. Just 0.1 percent were prosecuted.

3. Add a second serial number to new guns or improve placement of the first one: Up to 20 percent of all guns used in crimes are missing a serial number, making them impossible to trace. The solution? The ATF can require a second, hidden serial number—or just make sure the current one is placed where it can’t be filed away.

5. Don’t let dealers who lose their license retain inventory: Let’s say you’re a gun dealer who loses your license after flat-out ignoring federal gun regulations. You can still take advantage of the private sales loophole to unload your inventory, or just ask a friend or relative to get a license and sell through them. According to gun control advocates, the ATF could issue a regulation disallowing gun dealers stripped of their licenses from keeping their gun inventory.

6. Make gun sellers report details of sales to manufacturers: Almost half of gun traces initiated by the ATF are not completed, according to a 2008 analysis by the Brady Campaign to Reduce Gun Violence, because the “ATF must make contact first with the manufacturer, then with the distributor and dealer to complete a trace.” They recommend that the ATF issue a regulation compelling dealers to report details of sales to manufacturers to make the weapons easier to trace.

7. Stricter regulations on inventory: A 2008 analysis by the Brady Campaign found that in the previous 12 months, about 30,000 guns had gone missing from federally licensed firearm dealers. Gun control advocates say the ATF could issue regulations calling for gun dealers to better secure their inventory without having to pass brand new laws.

8. Require agencies to fork over data on mental health and drugs: In his first post-Newtown speech, NRA executive vice president Wayne LaPierre lamented “our nation’s refusal to create an active national database of the mentally ill.” The federal government already requires agencies to submit mental-health data to the National Instant Criminal Background Check System. But as Mayors Against Illegal Guns (MAIG) noted in a letter to the White House last month, of the 60 agencies required to do so, “52 had given zero mental-health records” in 2009. MAIG suggests President Obama issue an executive order creating a strict and enforceable reporting requirement.

9. Require the FBI to contact state and local agencies in case of mental-health rejections: Mental-health reporting is only as good as what you do with it. As MAIG points out, the FBI “does not have guidelines for handling mental health file rejections,” meaning that when a mentally ill would-be gun buyer fails a background check, state and local officials are kept in the dark. The FBI could fix that by creating an internal policy that favors sharing information.

10. Investigate thefts of five or more guns—and make states report them: According to the FBI, 25 percent of all trafficked firearms are stolen from dealers or homes. It sounds obvious, but the ATF currently only investigates heists of 10 guns or more—and only if at least one of the guns has been connected to a crime. Apparently there’s nothing troubling about the theft of nine guns.

11. Require dealers to track all trace requests: The White House has already signaled its intent to work with major retailers on gun control. This is an obvious point of agreement: Stores like Walmart already keep electronic logs of every federal trace request for a gun. By taking that to scale, they can pinpoint which stores are most likely to sell guns that end up being used in crimes.

12. Use existing data to figure out which gun shows are the worst—and target them: The 4,000 gun shows every year in the United States produce about 30 percent of the guns that end up in the hands of criminals. But the ATF isn’t tracking them. By collecting information on which traced guns were initially acquired at gun shows, the ATF can zero in on hot spots for illegal sales.

14. Enforce the 1968 Gun Control Act: This landmark legislation, endorsed at the time by the NRA, gives President Obama the authority to prohibit the importation of certain kinds of assault weapons, including the AK-47. He just hasn’t done so. As Kristen Rand, legislative director for the Violence Policy Center, points out, “Similar action on assault rifles was taken by the George H.W. Bush and Clinton Administrations.” Rand specifically points to the “Draco,” a Romanian AK-47 you can see in action below (warning: Rammstein):

How likely is Obama to actually take action on gun control? The Citizens Crime Commission’s Aborn, who worked on much of the Clinton era gun-control legislation, says Newtown has provoked an interest in gun control he hasn’t seen since the ’90s.

“Democrats have been running from this issue, but I think Newtown has shaken people to the core,” Aborn says. “I think we have a collective sense of failure that we weren’t able to protect these kids.”