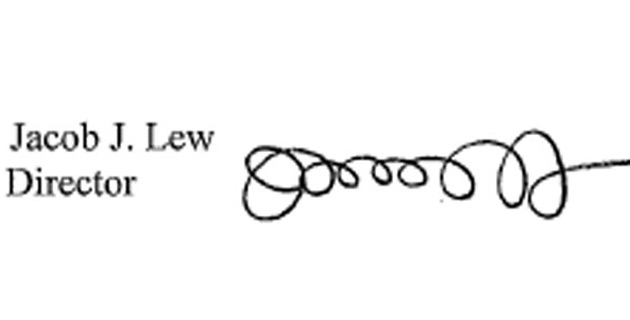 What ever could this mean???The White House

You’ve probably heard by now that Jack Lew—the wonky White House chief of staff and President Obama’s pick for next Treasury secretary—has quite the funky signature.

So strangely fascinating, so acrobatically whorling is his signature (pictured above), that it has taken on a life of its own since the announcement of Lew’s nomination—after all, Treasury secretaries’ signatures tend to end up on American currency: Lew’s now-famous John Hancock has already inspired a meme, the Jack Lew Signature Generator, a billow of snarky Tweets, a camp of people maligning the signature as terrible, a competing camp praising the signature as awesome, this gorgeous Reddit thread, and this joke from the president.

It also inspired a mild-to-moderate freakout from the people over at Fox News.

First, there was this on Friday:

From the piece by reporter Cristina Corbin: “Dianne Peterson, a handwriting expert based in Tennessee, agreed that the squiggly autograph shows Lew cares little about others’ opinion of him.”

And then this happened the next day:

That was an edition of Fox & Friends last Saturday morning in which Daily Caller editor-in-chief Tucker Carlson, Alisyn Camerota, and Mike Jerrick spent an entire segment interviewing Michelle Dresbold, the Pittsburgh handwriting expert and author of the 2006 book Sex, Lies, and Handwriting. (Dresbold is also known for trying to uncover the identity of Jack the Ripper and concluding that he was an abortionist from Rochester, N.Y. She also weighed in on Casey Anthony’s handwriting.) Here’s a snapshot of their odd discussion:

Jerrick: But because his signature’s loopy, doesn’t mean he’s particularly loopy, does it? I mean…

Dresbold: It might, but I don’t think he is…The thing you also want to notice is you absolutely cannot read anything in it, not one letter. And when you cannot read a signature it means that person does not want to give you any information about their personal life at all.

Jerrick: You can really read a person’s personality by a signature?

Fox & Friends on Monday brought on bloviating ignoramus and reality-TV star Donald Trump, who also started talking about Signaturegate, and how Lew’s signature showed the future Treasury secretary to be “unbelievably secretive”:

Trump was kind enough to clarify later in the day with a Tweet:

I am a handwriting analyst. Jack Lew’s handwriting shows, while strange, that he is very secretive—not necessarily a bad thing.

In the recent past, Fox has had larger freakouts over things like The Lorax, a dog in a Christmas card, and the rabid leftism of Muppets. So there you go.