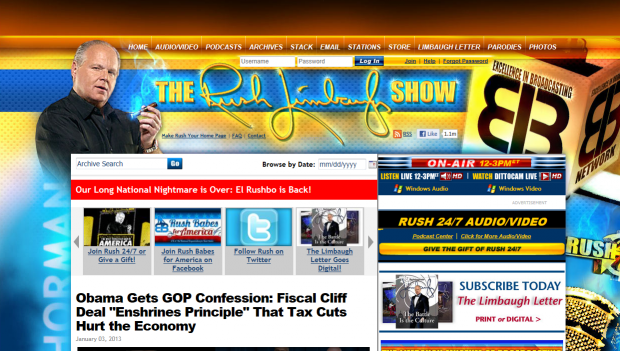 Rush Limbaugh’s website is not banned by the Pentagon. John Aravosis, AMERICAblog

Gay and lesbian Americans have been able to serve openly in the military ever since President Obama repealed “Don’t Ask Don’t Tell” in September 2011. But online, some Pentagon computers appear to force the LGBT military community behind closed doors, blocking military users’ access to LGBT advocates’ and other progressives’ websites, while conservative sites remain fully accessible, according to John Aravosis of AMERICAblog. The military now blames faulty computer software for the de facto censorship, but gay activists say the Department of Defense has known about the problem for over a year—and still hasn’t fixed it.

Aravosis—a journalist and activist who defended a US Navy sailor for challenging DADT in 1998—learned from a military contact that his website was blocked on the Pentagon’s official computer system. He then had several other contacts take screenshots of websites that were blocked on Pentagon computers. Aravosis discovered that LGBT websites like the Human Rights Campaign blog and OutServe-SLDN, a website co-founded by Air Force officer Josh Seefried that supports gay members of the military, were blocked. Progressive sites like Daily Kos made the blocked list as well. But the conservative websites of Andrew Breitbart, Rush Limbaugh and Ann Coulter, as well as anti-gay rights groups like the National Organization for Marriage and the Family Research Council, were accessible: 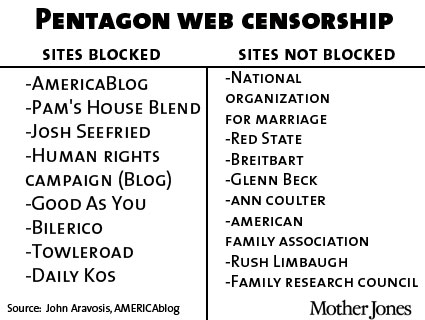 Zeke Stokes, a spokesman for OutServe, told Mother Jones that the organization and its 6,000 affiliated LGBT service members have been notifying the Pentagon and local commanders of this issue since the repeal of Don’t Ask Don’t Tell in 2011, but the Pentagon failed to adequately respond until this past weekend, when Aravosis pointed out the problem.

The Department of Defense issued a statement on Facebook on Friday that said it “does not block LGBT websites” deliberately. Rather, the pages “were denied access based on web filters blocking the Blog/Personal Pages” category. (Military officials have long blocked workers’ access to websites they consider non-secure, personal timewasters, or otherwise unfit for consumption in office hours.) Aravosis tells Mother Jones he found this initial statement  “disturbing,” because websites like Ann Coulter’s blog and Red State, a conservative news blog, both appear to fall in this category, but were not blocked. “They didn’t seem to recognize the possibility of a problem, and appeared to have no intent to investigate,” he says.

But Aravosis was sent what he calls “a much better statement” from Pentagon Press Secretary George Little on Saturday, saying that “[t]he Department of Defense strongly supports the rights of gay and lesbian men and women in uniform” and “in certain instances, access may [be] limited to content not directly related to carrying out mission or professional duties.” Little added that “some sites may have been unnecessarily blocked” and promised that the matter would be looked into.

Jeremy Hooper, activist and author of the pro-gay paean If It’s a Choice, My Zygote Chose Balls, says his site, Good As You, was unnecessarily blocked. “[There is no valid reason] for a nine-year-old news site that features daily updated news, commentary, and yes, irreverence, geared towards the fight for equality to be filtered,” he tells Mother Jones.

One reason the Pentagon may be blocking these sites (at least on some computers) is because it uses many different kinds of filtering software across the department, and one “information assurance” office may not have access to all the security settings. According to Aravosis, one of the DOD’s site-blocking programs was developed by Blue Coat Systems, an American company whose wares have also been used by the repressive regime in Syria. On Blue Coat’s website, the LGBT category is defined, not as housing sexually explicit content, but as containing “websites that provide reference materials, news, legal information, anti-bullying and suicide-prevention information, and other resources for lesbian, gay, bisexual, and transgender (“LGBT”) people.”

Richard Bejtlich, the chief security officer at the Arlington, Virginia-based info security firm Mandiant and an expert on Pentagon cybersecurity software, told Mother Jones that “it’s possible that all LGBT sites are blocked by default and the military didn’t know,” or even that “the settings came from the whim of a single person, as these systems are typically not very well-controlled.”

Bejtlich also points out that “blocks are generally not a censorship issue, but instead, DoD has found that the Russians or the Chinese are tunneling information and they shut everything down until they figure out what’s going on. DoD could be falling back on that excuse.”

Both Hooper and Stokes are willing to accept the Pentagon’s explanation that the censorship is most likely a software mistake. “[A]ssuming this is an error that is corrected quickly, it shouldn’t reflect badly,” Stokes tells us, but he also points out that “appropriate attention has not been paid to fixing it until now, despite numerous requests.”

Pam Spaulding, founder of the LGBT blog Pam’s House Blend, says that even if the censorship is unintentional, her site doesn’t pose much of a security risk. “What is so subversive about anything I write here that the tender souls at the Pentagon need their eyes protected from?” she writes. “Do they think the content will give service members the vapors or make them catch THE GAY?”