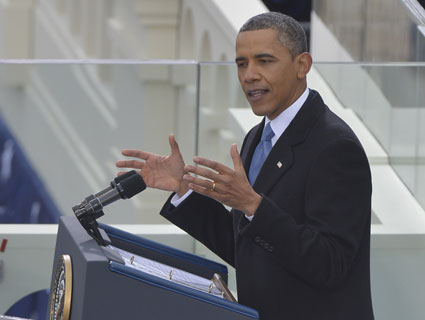 Four years ago, on a freezing day in Washington, DC, Barack Obama, before a crowd of over 1.5 million Americans, took the oath of office, and, in the wake of his historic (and, for many, inspiring) election, spoke of the tough times at hand. With the economy in near free fall, he referred to “gathering clouds and raging storms” and “this winter of our hardship.” He somberly urged the nation to “brave once more the icy currents, and endure what storms may come” in order to revive America.

His second inaugural address was more specific—in its intent and the aims it presented. (Video and a transcript of the speech are available here.) The speech was a reaffirmation of the progressive tradition of the nation and a recognition of the core components of Obama America. Having vanquished the conservative-libertarian, tea-partied, anti-government crusade of Mitt Romney and Paul Ryan, Obama celebrated the value of communal endeavors. “Preserving our individual freedoms ultimately requires collective action,” he proclaimed. The president noted that the citizenry must “together” tend to its most vulnerable and develop a modern economy, observing that the “free market only thrives when there are rules to ensure competition and fair play.” Offering a passionate defense of social safety net mainstays, he slapped the tea party in the face. These government programs, he asserted, “do not make us a nation of takers; they free us to take the risks that make this country great.”

Obama did issue the obligatory warning about relying too much upon government, but he presented a case for a robust public response to the  multiple challenges ahead. And the policy matters he referenced composed a progressive agenda: protecting Medicaid, Medicare, and Social Security, addressing climate change (by developing sustainable energy sources), ensuring equal pay for women, promoting marriage equality, ending the wars he inherited (“enduring security and lasting peace do not require perpetual war”), securing immigration reform, opposing restrictive voting identification programs, and building infrastructure. (He did not, however, dwell on the need for more jobs.)

Though the speech was certainly written for a wide audience, it targeted Obama’s people. He paid homage to Seneca Falls (women’s rights), Selma (civil rights), and Stonewall (gay rights). He spoke directly to those Americans attuned to those progressive struggles of the past and their present-day manifestations:

Days after Obama’s campaign outfit transformed itself into Organizing for Action, a permanent grassroots political machine that will whip up support for the president’s initiatives, the president was communicating with his troops, seeking to rally them for the struggles that await him (and them) in his second term. (Liberal groups, meanwhile, already have their own plan to remake American politics.)

And Obama had a particular message for his crowd: Let’s work hard, but let’s be realistic. Realizing that progressives sometimes complained during his first term that he did not push far enough, the president pointed out that politics is an ongoing process. Victory is never full or complete. In short, he was saying, hey, I do the best I can, and I will settle for the most that can be accomplished…and the battle will continue, beyond me, beyond us:

In 2009, Obama, perhaps inspired by his unlikely personal journey to the presidency, declared, “We come to proclaim an end to the petty grievances and false promises,” and he noted “the time has come to set aside childish things.” He was, as he certainly knows now, hoping against hope. During the last four years, he could not escape silly things: birtherism (and dozens of other Obama conspiracy theories), tea party legislators threatening default, GOP obstructionism, and a fusillade of false claims (he was taking over the health care system; the stimulus did not create new jobs; he slashed Medicare). In his second inaugural address, Obama did, once again, call for higher discourse in the political realm: “We cannot mistake absolutism for principle, or substitute spectacle for politics, or treat name-calling as reasoned debate.” But he now must realize that asking for the end to silliness is pointless. The goal is to triumph when confronted with such inanity and heels-dug-in opposition.

Obama did manage to do that repeatedly in the first term: health care reform, the stimulus, Wall Street reform, equal pay, the repeal of Don’t Ask, Don’t Tell, ratification of the New START arms control treaty, the payroll tax cut, the recent tax cut deal, removing troops from Iraq and  Afghanistan, and more. On some fronts, his wins were perhaps not as large as possible, and he often forged ahead without fully mobilizing his supporters. But with this address, Obama signaled that he does aim to implement the progressive values he tends to hold and that he is looking forward to fierce fights, knowing that he will have to keep his side fired up to have a shot at a successful second term.

Inaugural speeches change little in the cauldron of Washington politics. Obama’s words today will not gain him any ground in his oncoming clashes with Republicans in Congress. But they are a sign that he has thought deeply about what lies ahead for his presidency and that he hopes to wage a collective fight.