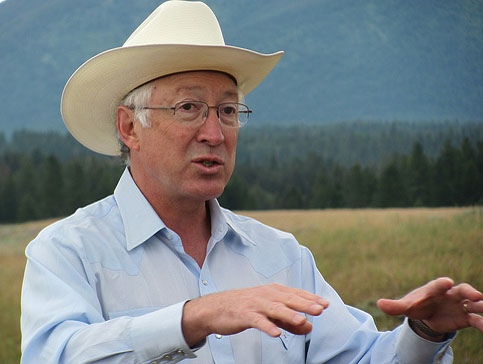 Interior Secretary Ken Salazar announced Wednesday morning that he will not be sticking around for President Obama’s second term. Instead, he’s heading home, he said. “Colorado is and will always be my home,” he said in a statement. “I look forward to returning to my family and Colorado after eight years in Washington, D.C.”

Salazar had a rough four years at DOI. He came in pledging to “clean up the mess” at one of the most problem-plagued federal agencies. But he hit a number of snags—including the Deepwater Horizon spill early in his time at Interior, which was blamed at least in part on failed oversight. Other problems related more to political backlash from Republicans who objected to DOI’s land protection efforts—which seemed to surprise the former senator from Colorado.

I wrote a profile of Salazar for High Country News last year that looked at his tenure and his desire to return to the West:

Salazar is nothing if not a measured man, as today’s event demonstrates. He speaks slowly and deliberately, throwing in colloquial quips. His policies tend to be equally moderate, and it’s hard to get him to say anything remotely controversial. More than one reporter has wondered if he’s intentionally boring in public. That’s probably another reason every story about Salazar relies on his hat for color; it’s usually the only showy thing about him. He looks shorter, and thinner, without it. It’s hard to picture him putting a boot to anyone’s neck, as he threatened to do to BP at the height of the 2010 Gulf Coast oil spill. Even the policies that most rankle his Republican critics have hardly been radical. In his three years as secretary, though, he’s watched the middle ground shift radically beneath him. His work at Interior often seems to be an endless exercise in trying to find it once again.

You can tell the struggle is wearing on him by the wistfulness with which he discusses the West. When asked whether he would spend a second term at Interior, his response is vague. “I’m there for the foreseeable future,” he says. “Looking beyond that, I don’t know.”