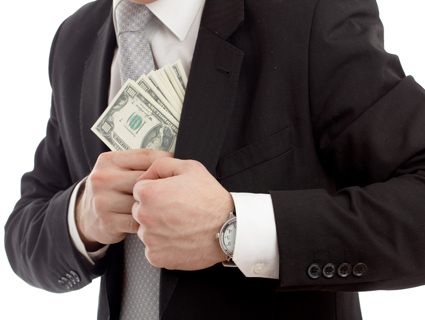 In August 2011, a group of 10 law professors submitted a petition (PDF) to the Securities and Exchange Commission urging the agency to consider requiring publicly held companies to fully disclose their political spending to their investors. After the proposal received more than 320,000 public comments, an unprecedented number, the SEC placed it on its 2013 agenda on the Friday before Christmas.

As it stands now, corporations must publicly disclose much of their political spending, but there is no way to know their total spending, partly because they can cloak their contributions by channeling them through outside-spending groups with lax disclosure requirements. For example, the insurance giant Aetna handed over more than $7 million to the American Action Network and Chamber of Commerce to quietly influence recent elections; those donations were only revealed inadvertently.

The Corporate Reform Coalition, a collection of campaign-finace reform groups led by Public Citizen, is applauding the SEC’s willingness to consider the new rules. “Investors have been clamoring for this information from the SEC for some time,” said Robert Jackson, a Columbia University law prof who cosponsored the SEC petition, during a conference call organized by the coalition this morning.

Some corporations already voluntarily disclose all of their political spending; others argue that mandatory disclosure would be too burdensome. Rep. John Sarbanes (D-Md.), a member of a newly formed House task force on election reform that’s taking aim at Citizens United and one of 42 members of the House to publicly support the SEC proposal, has rejected that argument, calling for the agency to “mandate uniform disclosure of a minimum dataset” of political spending. 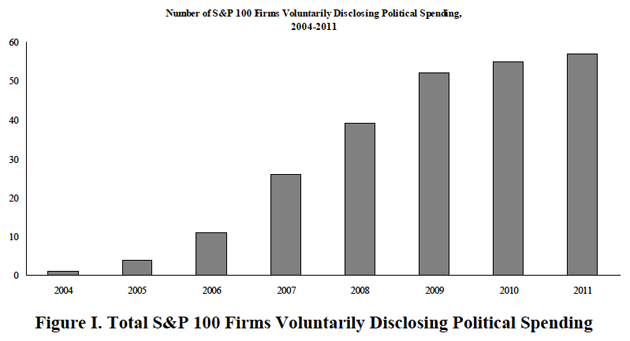 Corporate response to shareholders’ demands for political spending disclosure, based on figures from the Center for Political Accountability.

While proponents of the proposal expect strong opposition from corporate America, they are hopeful that the SEC, influenced by what Pennsylvania state treasurer Rob McCord called a “moderate, centrist, good-government impulse,” will implement the new rule this year. One of the SEC’s four commissioners, Luis Aguilar, is already an outspoken proponent of uniform disclosure requirements. Without them, he’s said, “it is impossible to have any corporate accountability or oversight.”

And for all the controversy surrounding Citizens United, the Supreme Court overwhelmingly upheld the constitutionality of disclosure requirements as part of its ruling. (Only Justice Clarence Thomas dissented.) The CU decision explicitly acknowledged the importance of shareholders’ “corporate democracy” in “determin[ing] whether their corporation’s political speech advances the corporation’s interest in making profits.”

Rep. Sarbanes has called the SEC’s willingness to consider the rule-change proposal “an incredibly important development.” On this morning’s conference call, he referred to outside spending groups as “money drones”: “You’re walking down the street running your campaign, next thing you know they come at you with a lot of money, and the people operating those drones are hidden because we don’t have proper disclosure.”