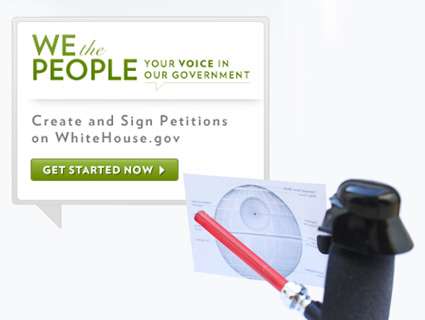 As White House officials were busy pondering new gun violence prevention measures, preparing for the coming debt ceiling showdown with Republicans, and meeting with Afghan President Hamid Karzai, the Obama administration on January 11 also issued an official decision: the US government would not construct the DS-1 Orbital Battle Station, commonly known as the Death Star from Star Wars Episode IV.

This was no joke. Well, almost no joke. “The Administration does not support blowing up planets,” the official White House statement read. “Why would we spend countless taxpayer dollars on a Death Star with a fundamental flaw that can be exploited by a one-man starship?” The response also address the dubious claim that such a large-scale federal undertaking would be a tremendous boon for the American economy. (The Galactic Empire has since issued a press release mocking the Obama administration for its decision.)

This official declaration was compelled by the White House’s own rules. Under its We the People initiative, anybody with internet access can petition the White House on any matter, and if a petition gains 25,000 signatures, the president—or his people—have to respond. Well, that’s how it worked until Tuesday. After being hit by all sorts of, shall we say, nonserious petitions like the Death Star one that reached the 25,000-signature benchmark, the White House has raised the bar. From now on, a petition will require 100,000 signatures in order to win White House attention. (When WTP debuted, the threshold was a measly 5,000.) But that fix may still not block the frivolous—the Death Star request drew over 34,000 signatures, and other ludicrous posts have managed to surpass the 100,000 mark—and some White House officials connected to the We the People project say (on background, of course), What were we thinking?

“If you had told me a year and a half ago that the White House would be devoting time writing [an official statement] on how Lord Vader could fix our economic woes, I would have just laughed loudly at you,” one White House staffer said.

“If you had told me a year and a half ago that the White House would be devoting time writing [an official statement] on how Lord Vader could fix our economic woes, I would have just laughed loudly at you,” one White House staffer who has worked on the WTP outreach program tells Mother Jones. Another White House staffer connected with the program is more blunt: “Sometimes, I find myself thinking, ‘My God, what have we done?'”

The White House response to the Death Star petition—a petition created by “John D” of Longmont, Colorado, on November 14 that urged President Obama to “secure resources and funding, and begin construction of a Death Star” by his last year in office—was written by Paul Shawcross, chief of the White House Office of Management and Budget’s science and space branch, and published on the We the People website, which was launched by the Obama White House in late 2011.

With WTP, it is not that hard to win—or waste—the attention of a White House official. The rules of petitioning are clear: You create a user login account, you log in, you draft and post an online petition. If your petition receives enough signatures from fellow users, your entreaty will finds its way onto the curated landing page, where it will ideally garner more attention. If your petition is deemed in violation of the terms of participation, it gets deleted. If your petition does not reach at least 150 signatures within 30 days of posting, it gets axed. But if your petition passes the now 100,000-signature threshold within a month of its posting, a White House official is required to issue an official response within 30 days. In theory, the White House must respond, no matter the subject.

Regardless, others remain cheery and encouraged, even in the face of the website’s excesses. “I like We the People,” an official familiar with the project said. “It puts some bureaucrats out of their comfort zones and reminds everyone we are working for the people.”

Here’s a taste of some of the people the White House has had to deal with lately: If you are a concerned citizen living in Maryland who wishes your state animal were a Pokémon character like Bulbasaur or Snorlax, there was a White House petition for that. If you want Beyoncé barred from singing the national anthem at Obama’s inauguration, there was a petition for that. For anybody craving a lighthearted reality TV series on C-SPAN starring a jolly Vice President Joe Biden, there is indeed a petition for that. Want to deport CNN host Piers Morgan for being in favor of gun control? Put your John Hancock here. And there is, of course, a petition requesting the Obama administration take these petitions more seriously, and multiple petitions requesting that the White House abolish White House online petitions.

In late 2011, the White House was forced to respond to two separate petitions demanding answers regarding an X-Files-style alien cover-up. One of the petitions was posted by Paradigm Research Group, a paranoid fringe group that espouses garden-variety Martian-conspiracy theories and runs this terrible-looking website.

Shortly after President Obama won reelection, dozens upon dozens of petitions came rolling in calling for the secession of individual states. (A backlash to these included several counterpetitions, like this one titled, “Deport Everyone That Signed A Petition To Withdraw Their State From The United States Of America,” and one titled, “Peacefully Grant the State of Herp-a-Derp to Withdraw from the United States of America and create its own NEW Government.”) Early this year, the Obama administration responded to the cries for secession (they are not in favor), a move that did little to deter certain secessionist elements in the country.

WTP was launched under the the banner of government transparency—from an administration “committed to creating an unprecedented level of openness in government.” (Obama’s is the self-proclaimed “most transparent administration ever,” though its actual record on the issue is mixed at best.) “I think [We the People] is a worthwhile experiment, even with the less serious [petitions],” said John Wonderlich, policy director for the Sunlight Foundation. “It’s not fundamentally changing how power works, but that’s not to say it’s not important. We’re seeing a lot of enthusiasm and attention. There are probably a lot of people who only heard about the petitions website because of the Death Star petition. If that makes them more aware of how the White House works…then that’s a good thing.”

“My favorite lighthearted one is definitely the Death Star one,” Wonderlich continued.

Macon Phillips, head of the White House Office of Digital Strategy, is the big kahuna behind the operation. During the early stages of the site’s development, top aide David Plouffe liked the idea enough to help Phillips sell it to skeptical senior staff. The White House saw the project as yet another avenue for digital civic engagement and as well-meaning outreach—a nice gesture, at the very least. What they did not foresee at the time of the launch was the extent to which the site would be co-opted for epic quantities of taxpayer-funded trolling.

Since its inception—and nearly 10 million signatures later—WTP has hosted a wide variety of petitions, including serious efforts that focus on subjects such as AIDS prevention, humanitarian intervention in Syria, pot legalization, and mass shootings in America. But the website has received the most attention for things less noble. The biggest traffic driver is the constant spate of goofy, often downright freakish demands—which in turn have provoked unserious and deservedly tongue-in-cheek responses from the executive branch. Still, things could be bleaker: “For the most part, it’s a good public service,” a White House staffer maintains, “and, hey—isn’t it nice to show people once in a while that you don’t lose all sense of humor just because you start working for The Man?” 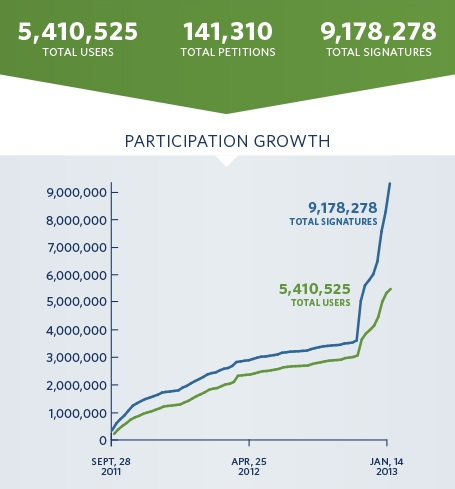 A look at the site’s numbers, via the White House blog.