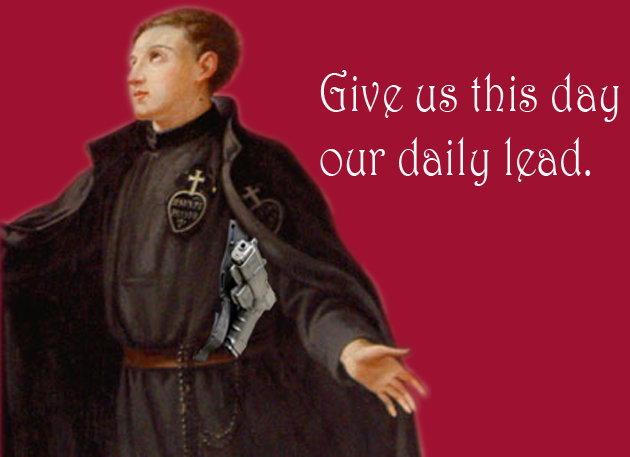 Saint Gabriel of Our Lady of Sorrows. <a href="http://en.wikipedia.org/wiki/File:Gabrad.jpg">French Passionists Archives</a>/Wikimedia Commons; <a href="http://www.shutterstock.com/pic-40607641/stock-photo-holster-with-gun.html? src=csl_recent_image-1">MISHELLA</a>/Shutterstock; photo illustration by Carolyn Perot

In 1859, the Italian village of Isola found itself under attack. Two dozen soldiers occupied the village and, as was their custom, set about torching, raping, and generally terrorizing. Then a twentysomething student at a nearby Catholic seminary pulled out two knockoff Colt Navy Model .36 caliber revolvers and ended the hostilities with one shot. Possenti, dressed in his traditional habit, showed off his marksmanship by sizing up a lizard 20 paces away and blasting it to bits. The invaders fled.

At least, that’s how John Snyder tells it. Snyder, 73, is the founder of the Saint Gabriel Possenti Society, an organization dedicated to getting Possenti, who was canonized in 1920, officially certified as the “patron saint of handgunners.” Wednesday is St. Gabriel Possenti Day—an annual event that this year coincides with the Senate Judiciary Committee’s hearing on assault weapons.

The problem, according to Catholic authorities: Possenti never shot that lizard. He wasn’t much of a marksman at all. In fact, the entire incident never even happened. Officially, Possenti is St. Gabriel of the Sorrowful Mother and, as designated by Pope Benedict XV, the patron saint of Catholic youth. According to the Rev. Arthur Carrillo, director of the Passionists’ Office of Mission Effectiveness, he was quite the dancer.

The campaign to make Possenti a gun rights icon began in 1987 when Snyder, a former associate editor of the National Rifle Association’s American Rifleman magazine who was lobbying Congress on gun issues, stumbled upon an article in a Catholic magazine that made note of the lizard incident. He traced the story to an earlier biography by a Catholic priest—and stamped, he takes pains to note, with the Church’s approval—that told the story in full. Then he promptly dashed off a formal request to the Cardinal Prefect of the Sacred Congregation for the Causes of Saints, the group of clergymen charged with determining which saints are patrons of what.

In Snyder’s letter to the Vatican, he argued that formal recognition of Possenti’s marksmanship would be “a further indication of the fact that an instrument, in the hands of a person committed in heart, mind and soul to Almighty God, may be used to bring about practical good here on Earth.” He followed it up by sending out Christmas cards featuring the young saint firing away at the lizard.

Snyder, who has previously dismissed his critics as “pacifistic pruneheads,” hasn’t mellowed much in his old age.

(Per the New York Times, seasons greetings from Snyder were an annual event inside the Beltway; previous editions featured “Santa preparing to blow away a burglar with a pistol, Santa with a gift sack of revolvers and Santa outlined against the sky blazing away at a Soviet plane with a machine gun.”)

In 1996, Snyder picked up his highest-profle supporter—then-GOP presidential candidate Pat Buchanan, who accepted a medal from Snyder (featuring Possenti, flanked by a lizard and a revolver) and promised to advocate his cause if elected. “When I get to that White House,” Buchanan said, “I’m gonna take that medallion you gave me, the patron saint of handgunners, Gabriel Possenti, and I’m gonna hang that in the Oval Office—right along with Robert E. Lee’s pistol!”

Snyder even arranged for a priest to bless a shooting range in Tennessee in the name of Possenti, although the facility’s owner fretted that the holy water would warp the wooden rifle stocks.

But the church itself wouldn’t budge. “We’re entirely opposed to it,” says Carrillo, who works for Possenti’s order. “The reluctance we have to see this go forward is because it’s taking a political agenda and leveraging religious devotion to serve that purpose.”

“As far as we can tell, it’s anecdotal,” Carrillo says of the Isola gunfight. “It appears in a particular biography written about 25 to 30 years ago, and it is not likely to be based in historical fact.” (A Passionist colleague told the Chicago Tribune in 1987 that the account of Posseti’s reptile rampage was “highly imaginative” and noted that no other biography of the saint referenced any such incident.)

The US Conference of Catholic Bishops has been a long-standing advocate for gun control. They support a ban on assault weapons, and since at least 1975, the bishops have considered handgun violence “a threat to life” and and called for their “eventual elimination from our society.”

Snyder, who has previously dismissed his critics as “pacifistic pruneheads,” hasn’t mellowed much in his old age. He blames the church’s stonewalling on a general reluctance by officials to embrace the more militant elements of the creed. “There is a lot of dovishness and pacifism on the part of a lot of clerical people, and they don’t like to have any attention called to the masculine approach to Christianity,” he says.

And even if there’s no primary-source evidence to back that, well, what’s wrong with that?

“These people who will say they haven’t found any other books in which this particular act is quoted probably would not like to reminded of the fact that there were no books that describe the Annunciation,” Snyder says. “And they’re not gonna dispute that!”