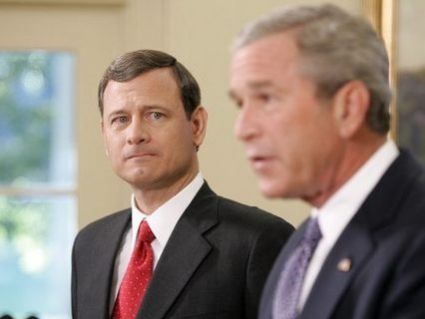 When he was in his late 20s, John Roberts was a foot soldier in the Reagan administration’s crusade against the Voting Rights Act. Now, as chief justice of the Supreme Court, he will help determine whether a key part of the law survives a constitutional challenge.

Memos that Roberts wrote as a lawyer in President Reagan’s Justice Department during the 1980s show that he was deeply involved in efforts to curtail the effectiveness of the Voting Rights Act, the hard-won landmark 1965 law that is intended to ensure all Americans can vote. Roberts’ anti-VRA efforts during the 1980s ultimately failed. But on Wednesday, when the Supreme Court hears oral arguments in Shelby County v. Holder, he’ll get another chance to gut the law. Roberts’ history suggests a crucial part of the VRA may not survive the rematch.

At issue in Shelby County is whether a major portion of the Voting Rights Act, called Section 5, is constitutional. Section 5 compels jurisdictions with a history of discrimination, mostly in the South, to ask the Justice Department for permission—preclearance, in legalese—before making any changes to election laws. Shelby County, Alabama, is arguing that Section 5 is an extreme measure that is no longer justified because racism is no longer the problem it once was. If Section 5 is overturned, voting rights groups say, the federal government’s ability to ensure Americans are not denied the right to vote on the basis of race—at a time when race has been used as a proxy for party identification—will be severely weakened.

Shelby County offers Roberts an opportunity to complete a mission he began three decades ago. When the chief justice was a young lawyer, in 1981, Southern legislators hoped an ascendant conservative movement could pressure Reagan into opposing an extension of the VRA. In June of that year, Reagan wrote a letter to Attorney General William French Smith requesting an “assessment” of the law. “I am sensitive to the controversy which has attached itself to some of the Act’s provisions, in particular those provisions which impose burdens unequally upon different parts of the nation,” Reagan wrote. “But I am sensitive also to the fact that the spirit of the Act marks this nation’s commitment to full equality for all Americans, regardless of race, color, or national origin.” Reagan didn’t go as far as former segregationist and then-Sen. Strom Thurmond (R-S.C.) by opposing the Voting Rights Act in its entirety, but his administration fought efforts to strengthen the law.

Roberts was a major player in the Reagan administration’s VRA policy, drafting numerous op-eds and memos for top Justice Department officials that argued for a weaker version of the law. At the time, crucial parts of the VRA were due to expire, but congressional Democrats and moderate Republicans weren’t just trying to renew the law—they were also trying to strengthen the law. After the VRA was enacted, it was interpreted as barring all discriminatory voting practices. In 1980, however, the Supreme Court, in a case involving the election rules in Mobile, Alabama, weakened the law by ruling that, except in those jurisdictions with a sordid history of blocking minority voters, the VRA only forbade intentional discrimination. Civil rights activists wanted to fix that by modifying the law to make it crystal clear that all discrimination in voting practices, not just intentional discrimination, was illegal.

Roberts wasn’t having it. Voting rights violations, according to one memo he helped draft in 1981, “should not be too easy to prove since they provide a basis for the most intrusive interference imaginable.” If Roberts and the Reagan administration had gotten their way, discriminatory voting systems in most of the country could only be barred when discrimination could be shown to be intentional. That would make it much tougher for the feds to intervene in states and localities and guarantee equal voting rights. The Reagan administration argued that they were just trying to preserve the Voting Rights Act, but it was really attempting to preserve a Supreme Court ruling neutering the law.

Roberts helped the administration hone its argument. He wrote that it made sense for parts of the VRA to require proof that discrimination was intentional. “Broad aspects of criminal law and tort law typically require proof of intent,” Roberts wrote in a draft op-ed in 1981. Allowing the VRA to apply in cases of unintentional discrimination all over the country and not just those places with a history of disenfranchising minorities, Roberts insisted, “would raise grave constitutional questions.” In the case of Mobile, the Justice Department’s voting rights attorneys eventually did prove the discrimination was intentional—by heading to Alabama and poring over the historical record to establish the election law had been passed deliberately to disenfranchise blacks.

To Roberts, that demonstrated there was no problem with requiring the government to prove that discrimination was intentional. “John Roberts and others used that case to say anyone who wants to prove intent could do it,” explains Gerry Hebert, an attorney now with the Campaign Legal Center who was part of the Justice Department team that went to Alabama. But proving intent “took enormous resources that only the Justice Department could have.” More important, says Hebert, having to prove “intent” placed voting rights attorneys in a difficult position: “You basically have to get judges to call local or state officials racist.”

Despite the best efforts of Roberts and others in the Reagan Justice Department, civil rights activists outmaneuvered Southern conservatives and the Reagan White House, forging large bipartisan alliances in the House and Senate to reauthorize the Voting Rights Act in 1982. And they strengthened the law, amending it to explicitly ban all discriminatory voting rules across the country, whether the discrimination is intentional or not.

Civil rights leaders and Voting Rights Act supporters in Congress had succeeded by embracing an idea that they had initially opposed—and that Roberts and the Reagan administration supported. It was called the bailout provision, and it provided a way for jurisdictions with a history of discrimination to prove they no longer needed close Justice Department supervision under Section 5. By accepting this compromise, VRA backers won the overall political battle.

Now, VRA defenders are hoping that it’s Roberts who is in a conciliatory mood and not set on eviscerating the law as the Reaganites wanted to do three decades ago. Is there reason for such hope? Roberts’ defenders have long argued that his Justice Department writings merely show that he was being a good soldier when he was in the Reagan administration. “The defense was that Roberts was just a government lawyer taking the position of his boss,” explains Rick Hasen, a professor at the University of California-Irvine School of Law who wrote about the memos during Roberts’ 2005 confirmation hearings.

But in 2009, when an earlier challenge to Section 5 of the Voting Rights Act reached the Supreme Court, Roberts sounded a lot like Reagan during oral arguments. He echoed the late president’s view that Section 5 represented an unconscionable punishment for the South’s past sins. “Congress can impose this disparate treatment forever because of the history in the South?” Roberts asked the government attorney defending the law.

In his subsequent opinion in the 2009 VRA case, in which the court seemed close to striking down Section 5, Roberts wrote that the government had made the bailout provision “all but a nullity.” In the three years since that verdict, however, more than 100 jurisdictions have been allowed to bail out of Section 5—more than twice as many in the nearly three decades before. It’s not even that expensive to bail out; the usual cost is $5,000. The reason Shelby County hasn’t been able to take advantage of the bailout provision is that in 2006, county election officials redistricted the only black city council member in one of the county’s towns out of a job.

Roberts and conservative opponents of a strong Voting Rights Act may have lost in 1982, but in 2012, they’re poised for a victory: The Supreme Court appears ready to strike down Section 5. Defending Reagan’s support for the bailout provision in 1982, Roberts wrote that bailout rules “should be addressed by Congress, and not pushed into the courts.” Roberts was arguing that elected officials, not judges, should make the rules governing when jurisdictions like Shelby County should be able to escape Section 5.

Has he changed his mind?