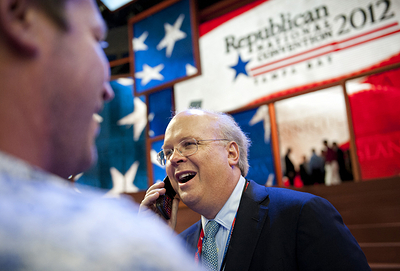 Karl Rove, the Republican political whiz, is still grappling with blowback from the unveiling of his latest venture, the Conservative Victory Fund. A combination super-PAC and dark-money nonprofit, the Fund will spend millions on advertising in contests where Republicans believe they only have a shot at winning the November general election if the right candidate emerges from the GOP primary. In other words, Rove wants to prevent future Todd Akins and Richard Mourdocks.

The latest Republican to join the Rove haters is Iowa Gov. Terry Branstad, who over the weekend said he’d ripped Rove and the Conservative Victory Fund in a recent phone call with the strategist. “I basically told Karl Rove that what he was doing is counter-productive and he needs to stay out of it,” Branstad told the Associated Press.

Rove and his new venture have driven a wedge between establishment Republicans and the ascendant conservative wing of the GOP. Matt Kibbe, the president of the conservative advocacy group FreedomWorks, recently described the furor over the new Rove super-PAC as “a little bit like gang warfare.” One tea party leader, Jenny Beth Martin, told the Hill she considered Rove’s new outfit a direct challenge to the tea party, adding that hard-line conservatives like herself are “ready to rise to the challenge.”

The 2014 primaries are more than a year away, but already the Conservative Victory Fund is eyeing races in Iowa, Georgia, and West Virginia. But Branstad, the Iowa governor, says Rove and his allies have their strategy all wrong. Branstad favors a more “diplomatic” approach (he declined to say what that entailed—a friendly game of Oujia, perhaps?) to ensuring that Republicans who win primary elections can also win in November. From the AP’s story:

But the targeted effort conflicts with a more diplomatic approach favored by Branstad and other mainstream Republicans wary of offending important officeholders and factions. Branstad, who is influential as the five-term governor of a political swing state that hosts the first nominating contest of each presidential campaign, was especially inflamed by indications the Rove organization would target Iowa arch-conservative Rep. Steve King if he tried to run for the state’s open Senate seat in 2014.

There is similar tension about Republican candidates in West Virginia, where the GOP hopes to pick up a seat long held by Democrats, and in Georgia, where Republican Sen. Saxby Chambliss’ retirement has set off an internal fight between hard-right conservatives and the GOP establishment.

Branstad, in an interview with the Associated Press, said Rove’s plan to use fundraising and negative advertising against suspect Republicans was “a mistake.”

“If some outside group that has no connection to Iowa attacks somebody from Iowa, that is not smart,” Branstad said.

In the weeks after Iowa Democratic Sen. Tom Harkin announced his retirement, Branstad has used private breakfasts with King and his House colleague Tom Latham to discuss who would be the strongest contender for seat, which has been held by Democrats for more than 30 years.

The Rove v. Tea Party story, needless to say, has quite a ways to go.