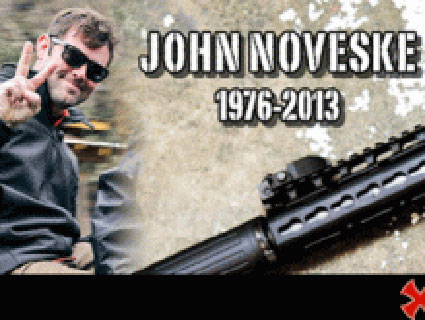 John Noveske, one of the alleged victims of Obama's alleged death squads

What do you get when you combine the president’s ability to secretly kill American citizens and the recent push to restrict gun access? One of the most bizarre anti-Obama conspiracy theories ever—and it takes a lot to win that prize.

Various tea party activists, libertarian websites and other conspiracy-minded Obama haters are claiming that Russian security forces have discovered that Obama is about to unleash “death squads” across America to assassinate defenders of the Second Amendment. According to Liberty.com, one of the sites perpetuating this latest story, Russian intelligence has outlined the whole nefarious plot in a memo for President Vladimir Putin, detailing the Obama’s administration’s dispatch of “VIPER teams…which is the acronym for Visible Intermodal Prevention and Response Team, a programme run by the Transportation Security Administration (TSA) and whose agents terrify millions of Americans with Nazi-like Gestapo tactics on a daily basis at airports and who report to the Department of Homeland Security (DHS).”

Liberty.com (run by a Florida tea party leader), which echoes the theory promoted by similar sites, maintains that these teams—800 of them, to be precise—are set to “disperse throughout his country in preparation for what Russian intelligence analysts are predicting to be a series of high-profile killings of dissident Americans set to begin as soon as February 22nd.” Obama has apparently been emboldened to launch such an operation by the recent federal court ruling upholding his right to kill American citizens with drone strikes without explaining why.

This supposed Russian memo purportedly identifies two gun rights activists who already have been murdered by Obama’s death squads: John Noveske, the owner of Noveske Rifleworks, which makes assault weapons, and Keith Ratliff, a cult sensation for his work on FPSRussian, a popular YouTube video channel devoted to high-power weapons and explosives.

Both men were, in fact, killed last month in separate incidents. Noveske died after his 1984 Land Rover crossed the center line in Grants Pass, Oregon and hit some boulders. He wasn’t wearing a seat belt and was ejected from the vehicle.

Ratliff’s body was found at a weapons testing and developing facility he operated in rural Georgia, among piles of firearms, with a single gunshot to the head. His death has indeed been ruled a homicide. A European site promoting this conspiracy theory reports:

By assassinating Noveske and Ratliff, FSB [Russian] intelligence analysts in this report say, the Obama regime is sending a “chilling message” to all who oppose their plan to totally disarm the American people that they “will stop at nothing” to see their master plan implemented.

Even worse, this report warns, is “new evidence” coming from the United States that the Obama regime is planning another “mass carnage” type event to occur within the next few weeks to bolster their spurious claim that Americans need to be disarmed.

After reading these shocking reports, I called the Russian embassy in Washington, DC, to investigate further. The press office did not return my call, so clearly it all must be true.

Or here’s another option: The conspiracy theorists and anti-Obama activists warning of impending death squads could have fallen for a pretty obvious hoax. They don’t, after all, seem to have an actual copy of the alleged Russian security memo to Putin. And there’s this: WhatDoesItMean.com was one of the earliest promoters of this “story,” and it’s an infamous conspiracy and “alternative news” site that is the source of hundreds of fictional doomsday reports. (It once published a story claiming that the earthquake in Haiti was caused by erroneous weapons testing by the US Navy.) Liberty.com and other sites have been quoting directly from WhatDoesItMean.com. So perhaps gun-rights activists should relax; they’ve got nothing more menacing to worry about than the pending legislation on Capitol Hill.