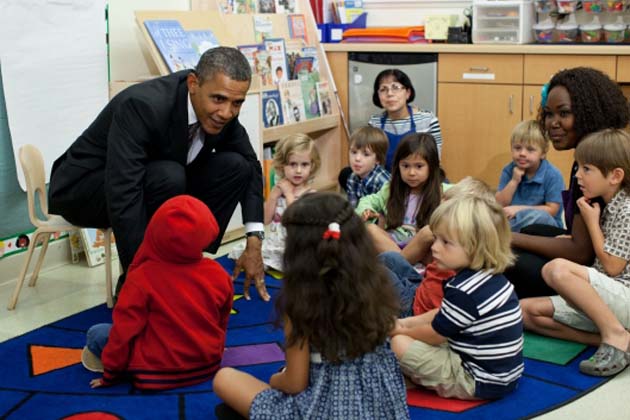 On Tuesday, President Obama first proposed to “make high-quality preschool available to every single child in America.” Like many ideas that get floated during the State of the Union, the plan could’ve withered from there. As Gail Collins described in the New York Times, one of the earliest victories of the new right was destroying a preschool proposal that made it through Congress in 1971. No president has seriously tried to pitch universal preschool, or a similarly ambitious plan for early education, since.

But the president promoted universal pre-K again during a visit to an early childhood center in Decatur, Georgia, on Thursday, as the White House rolled out an ambitious plan to give states money to expand preschool access for kids from low- and middle-income families, and grow several federal programs that focus on health and early education for infants, toddlers, and pregnant moms.

Mounting research indicates that preschool pays off for kids from low-income families, not just in terms of better grades and academics in school but also, as Kevin Drum noted, in important life gains. The kids who who attended the HighScope Perry pre-K program in Ypsilanti, Michigan—which Obama was likely referencing during SOTU when he threw out that early education provides a $7 return on the dollar—were as adults more likely to be employed, less likely to have committed crimes, and made more money than a control group. The idea that pre-K is a good public investment, even “a better investment than the stock market,” as the Washington Post argued yesterday, is becoming increasingly popular in Washington. But some experts argue that there are better ways to improve pre-K for kids from low-income families than the White House’s new strategy.

Researchers such as Robert Pianta, Dean of the Curry School of Education at the University of Virginia, believe that highly effective preschools tend to have two things in common: high quality and high dosage. “Dosage” includes the number of hours per day that a kid is in preschool and the number of years that kids attend. Obama’s plan explicitly calls for “high quality” programs, but it puts less emphasis on the dosage. The plan covers kids for one year of preschool as opposed to two, and it doesn’t specify how long kids will need to be in school every day. (In many current pre-K programs, kids only attend school for a few hours a day.)

According to Pianta, “there is quite clear evidence that more time in high-quality preschool (and child care) contributes to better academic outcomes for poor kids.” He thinks that that offering multiple years of high-quality preschool to America’s most disadvantaged kids, as opposed to offering some preschool to all kids from lower- and middle-income families like the Obama plan does, could be a better use of public money. “A big part of opening up these universal programs is closing that achievement gap, not just keeping it there,” he says.

One expert thinks that offering multiple years of high-quality preschool to America’s most disadvantaged kids, as opposed to offering some preschool lower- and middle-income kids, could be a better use of public money.

Further complicating things, eleven states don’t even have state-funded preschool programs. Obama’s plan would incentivize those states to start them up, but they would still have to build state-funded preschool programs from the bottom up in order to be eligible for federal funds. And this will be particularly challenging since state budgets for early childhood have suffered during the recession: In 2011, state funds for preschool declined by almost $60 million despite the stimulus funds states were still using to help bolster their education budgets.

This isn’t to say that it’s impossible to create an early education system in the US that helps break the poverty cycle, or that a smaller, less ambitious plan for improving preschool in the US couldn’t still help kids. To the contrary, part of the reason that we haven’t seen more successful preschool programs is likely because programs like Head Start are chronically underfunded. States such as Georgia and Oklahoma have instituted universal preschool and are seeing results. In Oklahoma, 74 percent of four-year-olds were enrolled in pre-K in 2011, and research has indicated these students make significant learning gains, including a 52 percent increase in pre-reading skills.

Though flawed, the president’s plan, says Pianta, is far better than no plan at all.  And the fact that Obama’s plan is pragmatic could be a sign that the president actually plans to try to get legislation through Congress. “We’re on the 20 yard line here, let’s get this into the end zone and then we can get the ball back” said Steve Barnett, director of the National Institute for Early Education Research (NIEER) at Rutgers University, from Decatur on Thursday. “If they were just trying to score political points, they would have proposed something that would have no chance of passing.”