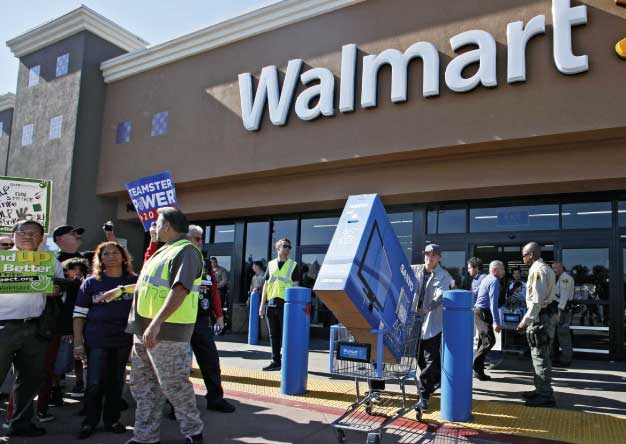 Outside the box: Black Friday shoppers and OUR Walmart protesters at a Walmart in Paramount, California last November. Nick Ut / AP Photo

At first, William Fletcher, a soul-patched, wisecracking 24-year-old who works in the electronics department at the Walmart in Duarte, California, couldn’t believe what the stranger with the clipboard standing outside his front door was telling him. The guy was describing a new group called Organization United for Respect at Walmart, which was recruiting employees like Fletcher to demand higher wages, better benefits, and less-punishing work schedules. Fletcher liked what he heard, but was skeptical. He’d recently settled a bitter dispute with management over a knee injury. “Frankly, I was convinced it was Walmart sending someone over to trick me into signing something to get me fired,” he says.

He told the guy he wasn’t interested, but another organizer came knocking the next day. This OUR Walmart thing must be real, Fletcher thought. He signed up but didn’t dare tell anyone, and for months the fear of being found out gnawed at him. And with good reason: Walmart strongly discourages the 1.4 million “associates” at its 4,601 US stores from organizing. The company has been known to shutter whole departments and even entire stores where unions make inroads. The result: The average associate earns $8.81 an hour, and many rely on food stamps and Medicaid.

Fletcher didn’t go public until June 2011, eight months after signing up, when he took time off from work to join 100 OUR Walmart members who traveled to Bentonville, Arkansas, to request a sit-down with company brass. Instead, they got to meet with a senior vice president of global labor relations in a parking lot. “It was terrifying,” Fletcher says. “I thought I’d be fired when I got back.”

He wasn’t, even though OUR Walmart has emerged as a major irritant to the big-box chain. On Black Friday last year, it helped organize protests at nearly 100 Walmart stores in 46 states. An estimated 500 associates walked off the job on the biggest shopping day of the year. Walmart, already facing allegations of bribery in Mexico and unsafe working conditions at its Asian suppliers, asked the National Labor Relations Board (NLRB) to block the protests, saying OUR Walmart was a union front. Store managers received a confidential memo (PDF) on dealing with restive employees (talking point: “I don’t think a walkout is a good way to resolve problems or issues, especially because it interferes with customer service and other associates who want to work”). A company spokesman said on national TV that if workers didn’t show up on Black Friday, “there could be consequences.”

If OUR Walmart members keep their jobs, it may suggest that the next best thing to a union might survive within one of America’s most anti-labor corporations.

Under federal law, companies may not fire workers for organizing unions, but those who walk off or launch other disruptive actions may be fired. Yet so far, there have been no reports of OUR Walmart members being sacked for walking out, and the group has claimed Black Friday as a major victory. “It was outstanding,” says Mary Pat Tifft, who’s spent 25 years at store No. 1167 in Kenosha, Wisconsin. She joined OUR Walmart in 2011 and, like Fletcher, hid her involvement for months. But once she let people know, she says, “It’s almost like you get this huge weight off your shoulders.”

As for the union front claim, Walmart’s got a point: OUR Walmart was established by the United Food and Commercial Workers union, though UFCW officials insist it’s not a steppingstone for unionizing. In late January, UFCW pledged to the NLRB that it would not try to unionize Walmart workers and would ease up on picketing for 60 days. As a result, the labor board says it will dismiss Walmart’s complaint alleging that OUR Walmart’s Black Friday protests were illegal. OUR Walmart wants the same things a real union wants, but it is not a union. It can’t bargain with management or bring grievances on behalf of workers. But it is a new toehold for the union, which has tried and failed to organize Walmart workers for a decade. In 2005, it started a short-lived group called Wake Up Walmart and tried its hand at informal organizing with Walmart Workers of America, a precursor to OUR Walmart. Both efforts went nowhere. Pat O’Neill, UFCW’s organizing director, says OUR Walmart offers workers a new way to speak out. “Instead of turning workers away,” he explains, “we’re saying, ‘Here’s an organization you can form or join and band together with fellow workers.'”

OUR Walmart is a promising model for national labor organizing at a time when unions are under siege, says Nelson Lichtenstein, a labor historian at the University of California-Santa Barbara. It provides a playbook for workers itching to improve conditions at corporations like Marriott or Whole Foods that have managed to beat back actual unions time and again. Nonunion unions also may give workers a voice in states where lawmakers have kneecapped organized labor with right-to-work laws and curbs on collective bargaining. The test, Lichtenstein adds, is whether OUR Walmart members keep their jobs. If they do, it may signal that Walmart isn’t spoiling for a public fight, suggesting that the next best thing to a union might survive within one of America’s most anti-union corporations.

Tifft isn’t waiting around to find out if her job is safe. In the past two years, she’s gone from a quiet stockroom receiver to one of OUR Walmart’s most vocal champions. She now hopes to recruit new members as an organizer. “I don’t have as much to lose,” she says. “I’m not the single mom that’s dependent on this job. If it takes me getting out there to speak for them until they find their voice, then that’s what I’ll do.”