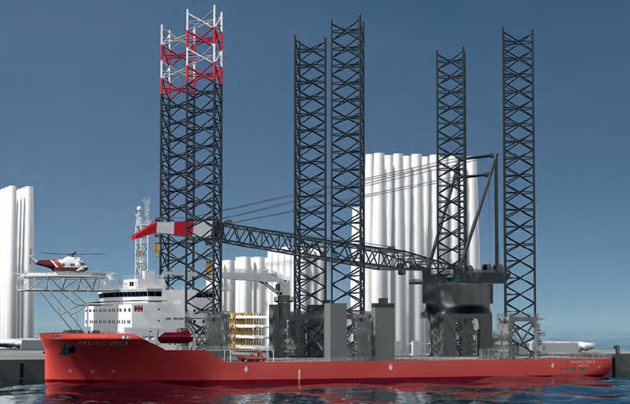 "Jack-up" ships like this are needed to drive massive offshore wind turbines into the seafloor. There's not a single one in the US. <a href="http://www.flickr.com/photos/rimpl/3154624564/sizes/z/in/photostream/">perspective-OL</a>/Flickr

Despite massive growth of the offshore wind industry in Europe, a blossoming array of land-based wind turbines stateside, and plenty of wind to spare, the United States has yet to sink even one turbine in the ocean. Not exactly the kind of leadership on renewables President Obama called for in his recent State of the Union address.

Light is just beginning to flicker at the end of the tunnel: On Tuesday, outgoing Interior Secretary Ken Salazar told a gathering of offshore industry leaders he was optimistic the long-embattled Cape Wind project would break ground before year’s end. And in early January industry advocates managed to convince Congress to extend a critical tax incentive for another year.

But America’s small-yet-dedicated entrepreneurial corps of offshore developers are still chasing “wet steel,” as they call it, while their European and Asian colleagues forge ahead on making offshore wind a basic component of their energy plans. So what’s the holdup? Here’s a look at the top reasons that offshore wind remains elusive in the United States:

1. Begging bucks from Uncle Sam: The industry breathed a sigh of relief this year when Congress reupped the Production Tax Credit, which recoups wind developers 2.2 cents for every kilowatt-hour of power they produce, and the Incentive Tax Credit, which pays back 30 percent of a wind project’s construction costs. It might sound like chump change, but the PTC alone amounts to $1 billion a year, and industry advocates insist that wind would hit the doldrums without these subsidies. Still, they hardly put wind on a level playing field with the lavishly subsidized (and lushly lobbied) fossil fuel industry.

That’s especially a problem for offshore wind, says Thierry Aelens, an executive with German developer RWE. Higher construction and transmission costs make electricity from offshore over twice the price of onshore in the United States, he says, a tough pill for state regulators and utility operators to swallow, especially given the low cost of natural gas made possible by fracking. Today renewables startups rely heavily on private investment to get off the ground, but the industry needs better financial backing from the feds to help it compete with fossil fuels, Aelens says. “Germany is a fully subsidized system. Which technology get supported is fully in the hands of the government.”

“Why would you want to sail in a forest of windmills?”

2. Blowback from “stakeholders”: Whale and bird lovers. Defenders of tribal lands. Fishermen. The Koch brothers. Since it was proposed in 2001, Cape Wind, a wind farm whose backers say could provide 75 percent of Cape Cod’s energy needs, has been run through a bewildering gauntlet of opponents and fought off more than a dozen lawsuits on everything from boat traffic interference to desecration of sacred sites to harming avian and marine life. Just down the seaboard another major project, Deepwater Wind, had to negotiate concerns that its turbines would throw a roadblock in the migratory pathways of endangered right whales. Alliance for Nantucket Sound, Cape Wind’s main opposition group, claims the project “threatens the marine environment and would harm the productive, traditional fisheries of Nantucket Sound.”

Last summer’s “Cape Spin” is an excellent “tragicomic” rundown of the controversy:

Of course, there’s another powerful factor at play here: NIMBYism. No one could put it better than fossil fuel magnate Bill Koch, owner of a $20 million Cape Cod beachfront estate and donor of $1.5 million to ANS: “I don’t want this in my backyard. Why would you want to sail in a forest of windmills?”

But Catherine Bowes, a senior analyst with the National Wildlife Federation, says while there are legitimate concerns for wildlife, Cape Wind and Deepwater have both bent over backwards to accommodate them. “I think there’s an attempt at hijacking” the wildlife message by the NIMBYers, she says. “Wildlife issues are often used as a reason to oppose a project even by those who have never cared about animals before.” Many of the nation’s leading environmental organizations—including the NWF, Greenpeace, and the Sierra Club—have come out in favor of the project. It’s easy to see why, Bowes says: “We know that the biggest threat to wildlife is global warming.”

3. Not a single ship in the Unites States is equipped to handle wind turbines: Forget about whales and yacht routes. How the hell do you go about lodging a 450-ton, over-400-foot tall turbine into the ocean floor? Answer: With one massive mother of a boat.

But there’s a problem, says Chris van Beek, Deepwater’s president: “At this point, there is not an existing vessel in the US that can do this job.”

The world’s relatively small fleet of turbine-ready ships—500-foot, $200 million behemoths—is docked primarily in Europe; an obscure 1920 law called the Jones Act requires ships sailing between two US ports to be US-flagged, and once the foundation of an offshore turbine is laid it counts as a “port.” Consequently, turbine installation ships cruising in from, say, Hamburg, wouldn’t be able to dock in the States.

On top of that, given the pittance of offshore projects in the works in the United States, bringing the ships in from abroad can be cost-prohibitive. Offshore turbines could find themselves all dressed up with nowhere to go.

Weeks Marine of New Jersey is working to solve the problem by building the first country’s first turbine ship. They’ve completed the hull and hope to have the boat seaworthy by 2014, possibly in time to chip in on putting up Cape Wind.

4. States and feds butting heads: The recipe for every offshore wind farm has two essential ingredients: a construction site, and a contract with the electric utility for the developer to sell the farm’s power into the grid at a fixed price for a set period of time. In Europe, these go hand-in-hand: Governments auction off sites with the contract thrown in. But in the United States, the deep water necessary for wind turbines is managed by the federal Interior Department, while the contracts are awarded by states. So a project could wind up winning the site lease, but getting passed over for the contract, or vice versa.

“It’s fucking nuts,” Deepwater CEO Jeff Grybowski says. Even if you sweet-talk a state—Rhode Island, in his case—into signing the purchase contract, “there’s a possibility for some other developer to win the land, and then you don’t get the project.” Since Deepwater and Cape Wind have the only two federal permits for offshore wind, both by the Obama administration, this state-federal tension hasn’t been a major issue yet. But as wind lobbyists schmooze their way into statehouses up and down the Atlantic seaboard and score more contracts, the feds will need to rethink how they decide who gets to develop the ocean floor.