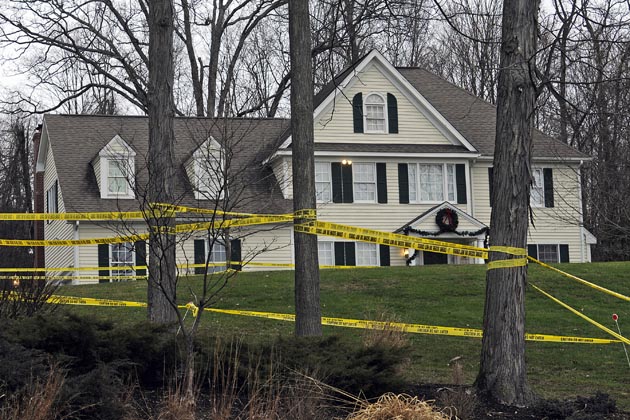 Shortly after the massacre in Newtown, Connecticut, police investigators seized a large arsenal of weapons from the killer’s home, according to search warrants made public on Thursday. That the home of Adam Lanza and his mother, Nancy, contained an array of powerful handguns and rifles is no surprise, but the documents reveal an even darker picture than previously known to the public: Investigators also found a cache of knives, samurai swords, 1,600 rounds of ammunition, a military uniform, and news clippings about prior mass murders in the United States and abroad.

They also discovered materials from the National Rifle Association.

In addition to the stockpile of weaponry, the home contained a certificate from the NRA bearing Adam Lanza’s name, a NRA guide to shooting, and training manuals for various firearms, including the Bushmaster that Lanza used to carry out the slaughter. The CEO of the company that sells Bushmaster rifles sits on a powerful committee inside the NRA, as we first reported in January.

For the NRA, which has been highly effective with its messaging in the gun debate over the years, the news is a blow. The new details begin to disarm the gun group’s strategy to divert attention from the highly lethal weapons Lanza used by focusing on him as just another deranged criminal with no connection to “good guys with guns.” In his audacious speech a week after the Newtown massacre, NRA spokesman Wayne LaPierre talked of “genuine monsters” lurking across America, of “people so deranged, so evil, so possessed by voices and driven by demons that no sane person can possibly ever comprehend them.” He continued: “They walk among us every day. And does anybody really believe that the next Adam Lanza isn’t planning his attack on a school he’s already identified at this very moment?”

Now we know that “next Adam Lanza” may well have NRA certification and know-how at his fingertips.

Since the NRA makes virtually none of its information public, naturally we’ll have to take their word against that of Connecticut law enforcement officials and the FBI.

The NRA’s response on Thursday seemed telling: flat-out denial, with some defensive kick to it. “There is no record of a member relationship between Newtown killer Adam Lanza, nor between Nancy Lanza, A. Lanza or N. Lanza with the National Rifle Association,” it said in a statement. “Reporting to the contrary is reckless, false and defamatory.”

Specifics about the NRA certificate found in the house remain unclear. Since the NRA makes virtually no information available to the public about its inner workings or the membership it claims, naturally we’ll have to take the group’s word against that of Connecticut law enforcement officials and the FBI. (And if that seems reasonable, the NRA also has a fantasy about “gun-free zones” they’d like to sell you on.)

Details in the newly released documents also underscore why Lanza was capable of such terrible carnage on December 14 at Sandy Hook Elementary. The military-style assault rifle and 30-round magazines he used—defended by the NRA as tools of hunting and sport—allowed him to unleash 154 bullets in less than five minutes. These were the same type of powerful weapons used in numerous other mass shootings, which the White House and some Democrats in Congress now seek to outlaw.

The news came on a day when President Obama appeared at the White House with Newtown families and other mass-shooting victims to once again demand action from Congress. (Though the president’s focus is now on passing universal background checks, with political prospects dimmer for legislation banning assault weapons or high-capacity magazines.) The anguish is still fresh in Newtown and well beyond, the president said, pushing back on the notion that the emotional impact of the tragedy has started to fade:

It’s been barely a hundred days since 20 innocent children and six brave educators were taken from us by gun violence, including Grace McDonnell and Lauren Russo and Jesse Lewis, whose families are here today. That agony burns deep in the families of thousands, thousands of Americans stolen from our lives by a bullet from a gun over these last 100 days, including Hadiya Pendleton, who was killed on her way to school less than two months ago, and whose mom is also here today, everything they lived for and hoped for taken away in an instant.

The president didn’t mention the NRA or its allies, but he took direct aim at their argument against universal background checks, a policy he noted has extraordinary public support, with 90 percent of Americans—including an overwhelming majority of gun owners—behind it. “What we’re proposing is not radical, it’s not taking away anybody’s gun rights,” he said. “It’s something that, if we are serious, we will do it. Now is the time to turn that heartbreak into something real.”

Watch his full remarks, followed by the long list of weapons found in Lanza’s home, below the video clip:

Here are highlights from the search warrants showing the stockpile of weapons found in the Lanza home: