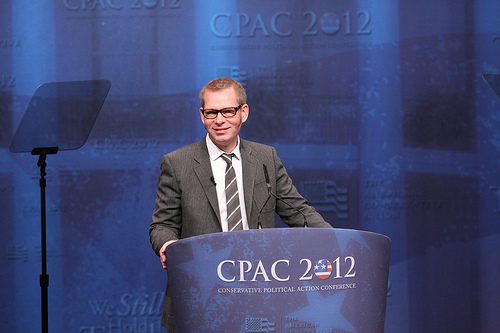 As it does every year, the conservative movement has turned out en masse for the Conservative Political Action Conference, better known as CPAC, an annual Washington confab. Everyone’s here: activists, operatives, Rand Paulites, politicians, Mitt Romney, think tank wonks, big-wig donors, fundraisers courting the big-wig donors, and so on. But there’s one big name glaringly absent from the CPAC schedule: FreedomWorks.

FreedomWorks, in case you slept through the summer of 2010, is the liberty-loving, ostensibly grassroots outfit that fueled the tea party movement and helped elect a class of uncompromising, hard-line conservative politicians such as Rep. Allen West (R-Fla.) and Sens. Ted Cruz (R-Texas) and Mike Lee (R-Utah). FreedomWorks has been a fixture at past CPACs: the group sponsored panel discussions and happy hours and film screenings, its staffers weighed in on “new media activism” and a constitutional amendment curbing government spending. In 2012, Kibbe spoke at CPAC’s main stage.

Yet FreedomWorks is nowhere to be found at CPAC 2013, housed this year at the spacious Gaylord Convention Center at Maryland’s National Harbor. No staffers are scheduled to speak. No events bear FreedomWorks’ name as sponsor. FreedomWorks doesn’t even have a booth in the vast exhibition hall here (nearly everyone else does, from the NRA and Citizens United to the Ayn Rand Center for Individual Rights and the author of the book WTF? How Karl Rove and the Establishment Lost…Again). FreedomWorks’ lively Twitter account is silent on the matter of the conservative movement’s biggest event.

CPAC 2013 comes at a rough moment for FreedomWorks. As Mother Jones has reported, FreedomWorks’ board of directors is divided over the direction of the organization, a conflict that burst into public view after ex-chairman Dick Armey resigned from the group last year. Several board members support Kibbe and vice president Adam Brandon, while others were Armey loyalists who believe that Kibbe used FreedomWorks resources for his own personal gain. For months, private investigators have been interviewing FreedomWorks employees and digging through the group’s financial records at the behest of board members C. Boyden Gray and James Burnley. That investigation is ongoing, creating a tense atmosphere in the FreedomWorks offices. And the group’s headaches got worse when my colleague David Corn revealed that FreedomWorks staffers had made a video depicting an intern wearing a fake panda suit pretending to give oral sex to someone posing as Hillary Clinton.

That turmoil may explain the group’s absence at CPAC. I sent an email to Jackie Bodnar, FreedomWorks’ spokeswoman, asking why FreedomWorks was MIA. She has yet to write back.