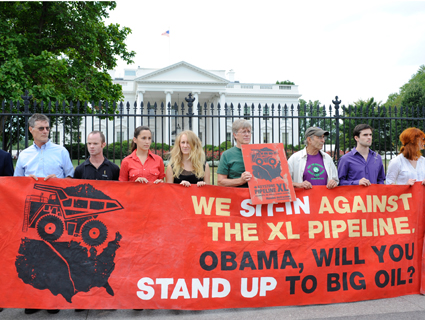 On Friday afternoon, the State Department released a draft of its much-anticipated new analysis of the environmental impact of the proposed Keystone XL pipeline. Although the report makes no firm statement one way or the other about whether the controversial pipeline from Canada to Texas should be approved, some of its conclusions have enviros worried that a greenlight is inevitable.

The administration has spent more than two years considering whether to approve the 1,600-mile pipeline that would carry oil from Canada’s tar sands to refineries in Texas. Because the pipeline crosses an international border, the State Department gets to decide whether it should be built. Climate change activists have been holding rallies and civil disobedience actions outside the White House for the past year and a half in an effort to convince the administration to block the project. Obama delayed a decision on the pipeline in November 2011, asking the State Department to produce more research on the pipeline’s potential environmental impact—the report, a “supplemental environmental impact statement,” or SEIS, that was issued Friday afternoon.

Enviros immediately seized on the new report, arguing against its claim that any spills associated with the pipeline are “expected to be rare and relatively small,” and said it underestimated the project’s contribution to planet-warming greenhouse gas emissions. They also challenged the idea that TransCanada’s pipeline will not make a huge difference in the development of the tar sands, pointing to the industry’s own claims that the pipeline is essential to their plans to expand export of this type of oil.

“If they don’t have [Keystone XL], they won’t be able to expand the tar sands like they’ve been planning to,” said Bill McKibben, the author and activist whose group, 350.org, has organized the pipeline protests. He called the pipeline “the most important issue for the environmental movement in a very long time,” noting that it has brought “huge numbers of Americans into the streets.”

Michael Brune, president of the Sierra Club, noted the timing of the draft’s release. “You know the news is bad when it’s buried at 4 o’clock on a Friday afternoon,” he said on a call with reporters shortly after the release. Enviros have framed the pipeline as a test of Obama’s sincerity on dealing with climate change. Brune acknowledged that the SEIS likely “makes the president’s job more difficult” because it will increase pressure on him to approve the pipeline.

But, Brune added, “this is the president’s decision. He can either lead our country to a clean energy future … or he can approve a pipeline that will bring the dirtiest oil on the planet through the US, and for the next decades we will know that the Keystone XL was approved under Obama at the time that we needed strong leadership on this issue.”

The report is in draft form and will be open for public comment for 45 days. After that, the State Department will issue a final report and, eventually, a final decision on whether the pipeline should be built.

McKibben said the pipeline’s critics will not be deterred by Friday’s draft report. “I don’t think anybody is going to walk away form this fight,” McKibben said. “My guess is this will produce more determination in a lot of people.”