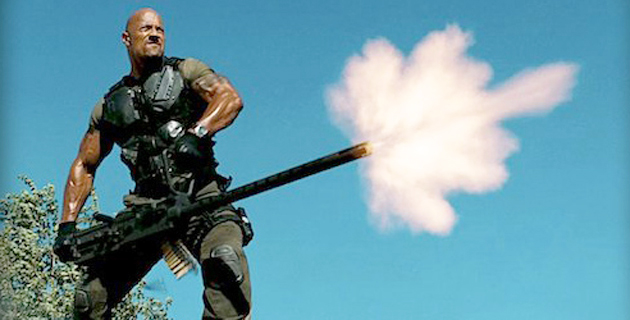 Before I get to why, let me just state for the record that Retaliation is no Battleship—which is to say it is not a coruscating beacon of unimpeachably fantastic moviemaking. Yes, they are both Hasbro movies; but this one lacks a certain joy and self-aware humor—even though it was written by the same guys who wrote Zombieland and Spike TV’s The Joe Schmo Show. The brightest part of the movie is the fact that rapper/producer RZA * plays a blind ninja dojo master named Blind Master. (Click here to see RZA as a ninja-dojo-master action figure.) The film also has Channing Tatum, The Rock, North Koreans, Adrianne Palicki fighting North Koreans, and 3D visual effects.

But the real draw is that this movie possesses plenty of amazing (but perhaps unintentional) political troll-power.

The crème de la crème of the G.I. Joe: Retaliation trollfest is that—as my colleague Tim Murphy points out—much of it doubles as a conservative anti-Obama fantasy. One of the bad guys (played by Jonathan Pryce) is the Democratic President of the United States, a foreign-born imposter who uses killer drones on American citizens overseas, and desires a world rid of nuclear weapons. As the movie trundles to its climax, the only thing that can stop him is a team of gun-toting insurgents, led by a politically incorrect Army veteran played by Bruce Willis who does nothing but hoard a large arsenal of assault weapons in his house.

DOES THIS REMIND YOU OF ANYONE???

There are many other instances of political trolling, featuring an array of targets. For instance, the villains orchestrate from behind the scenes a global summit to eliminate all the nukes. “[H]ere’s the rare film to make an evil scheme out of global nuclear disarmament,” as Scott Tobias writes at The A.V. Club. The film gives the finger to Global Zero in a number of ways, particularly during the climactic meeting of nuclear-armed states that is rife with trolling. The North Korean envoy is a goofy, chubby, Looney Tunes caricature who doesn’t or can’t talk. Israel is at the summit, shown ready to launch its entire nuclear arsenal; and in case the flag on the Israeli official’s lapel wasn’t enough, there’s a government Jumbotron that displays the word “ISRAEL” in gigantic letters on the wall. (The reason this constitutes epic trolling is because the Israeli government in real life won’t publicly admit to having a nuclear weapons program and has gone to great lengths—including drugging, kidnapping, and jailing a dissident—to continue to not acknowledge its existence.)

In one scene, a female G.I. Joe soldier crashes a White House gala, wearing a tight red dress and impersonating a Fox News reporter; the imposter president then quips that her media affiliation explains why her body looks so “fair and balanced.” In one scene, a villain gleefully discusses torturing people, and says, “You know…they call it waterboarding—but I never get bored,” which I can only assume is an homage to “I got soul, but I’m not a soldier,” “I got ham, but I’m not a hamster,” and “They call ’em fingers, but I never see them fing.” Democratic political strategist James Carville has a speaking role in this film, which has to qualify as trolling of some kind. And the movie casually explodes London, taking with it centuries of culture, architecture, and over eight million souls; the death and destruction isn’t mentioned even once after it happens, and nobody sheds a tear for London.

As you can plainly see, G.I. Joe: Retaliation takes its fair share of day trips to Troll City.

G.I. Joe: Retaliation gets a wide release on Friday, March 29. The film is rated PG-13 for being a huge troll. Click here for local showtimes and tickets.

* Though there is some debate over whether to refer to him as “RZA” or “The RZA,” the usage of “RZA” is official AP Style.