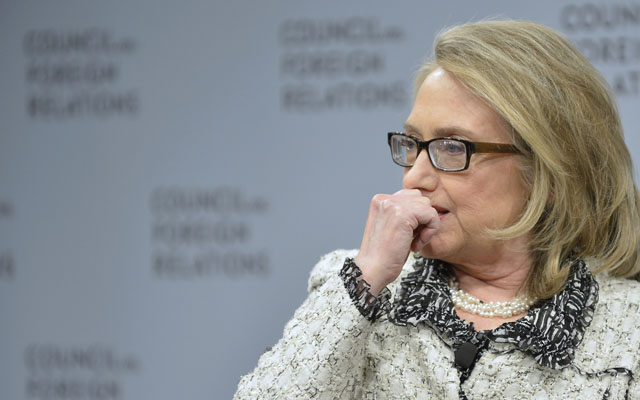 The courtship has already begun. A select few politicians are traveling the country, schmoozing with 1-percenters, attending the odd fundraiser, and quietly laying groundwork for—yes, that’s right—a 2016 presidential campaign. Mere days after the November 2012 elections, for instance, several Republican governors met with casino mogul Sheldon Adelson, who reportedly gave $150 million to GOP causes last election cycle. On the Democratic side, Governors Martin O’Malley of Maryland and Deval Patrick of Massachusetts are getting friendly with big left-leaning funders and building up their name recognition at invite-only meet-and-greets and out-of-state Jefferson-Jackson dinners.

But there’s a striking dynamic at play in the donor world that is apparently unique to the Democratic side. Call it the Hillary Clinton Cash Freeze. According to Clinton’s friends, fundraisers, and former campaign staffers, big Democratic money isn’t going anywhere until she makes up her mind about launching a second presidential campaign.

That’s problematic for the likes of O’Malley, Patrick, New York Gov. Andrew Cuomo, and other possible contenders. More than ever, presidential hopefuls need big bankrollers; after all, they now operate in the era of the $1 billion campaign. With public financing of campaigns a bygone relic, a successful presidential candidate needs a super-PAC or two in his or her camp with millionaires and billionaires bankrolling it. And with Clinton in the wings, her allies say, those on the roster of funders and bundlers needed to win an election in the post-Citizens United world aren’t committing to any particular candidate.

Mike Stratton, a Denver-based political strategist and an onetime adviser to O’Malley, says the governor and other Democratic presidential hopefuls are spending more time “prospecting” potential donors at events than they are directly asking them for money. “The prohibitive force on the Democratic side, the 800-pound gorilla,” says Stratton, “is Hillary.”

Harold Ickes, a former aide to Bill and Hillary Clinton and a prolific Democratic fundraiser, says Clinton-mania is at full throttle despite how far off the 2016 vote remains. “The most asked question of me is: What do you think she’s gonna do? Is she gonna run? Do you think she should run?” Ickes says. “It’s just phenomenal, and you hear this from all over the country.”

Another thing Ickes says he hears a lot: Donors are feeling burned out—from the constant pleas for money from Obama’s reelection campaign, from Democratic candidates for Senate, from the 2013 inauguration, and most recently, from Organizing for Action, the nonprofit hoping to raise $50 million to bolster Obama’s second-term policy agenda. “People don’t want to give right now,” he says. “They’re tired.”

Yet, even without a clear idea of Clinton’s plans, three super-PACs have already been created to raise and spend unlimited money if she decides to run. As donors grip their checkbooks tightly, they sure are riveted by Clinton’s prospects. “A lot of the people I know, a lot of them are Hillary people to begin with, but boy, they’re not about to part with a dollar till they see what she’s going to do,” Ickes says of the 2016 race.

“If they start to support somebody before she makes her decision, particularly the former president would take that very personally.”

Few politicians enjoy the kind of donor loyalty that the Clintons do. Some of those relationships date back to the early 1990s, when then-Gov. Bill Clinton chaired the Democratic Leadership Council (DLC), the nonprofit group created to steer the beleaguered Democratic Party toward the center. The DLC gave Clinton entrée to wealthy East Coast donors, relationships that he banked on to win the White House.

“Anybody who was with [Bill] from the DLC days, we made this long march from the wilderness to the White House,” says Al From, who founded the DLC in 1985. Along the way, he adds, the Clintons “were meticulous in taking care of their donors, always treating them well, so I would assume that loyalty continues.” (The Clinton administration in fact treated its donors so well—the White House sleepovers, coffee klatches, and rides on Air Force One—that a scandal erupted when details of it appeared in the press.)

Hillary Clinton put the donor network to good use during her two Senate runs in New York in 2000 and 2006. For her second campaign, she raised $51 million and spent $41 million, the most of any Congressional candidate in the 2006 election cycle. And for her failed presidential run, she raised $222 million, the bulk of it from the East and West coasts, out-raising Obama for much of the presidential primary season.

Donors who might commit to another candidate at this juncture risk running afoul of the Clintons’ powerful allies. “If they start to support somebody before she makes her decision, particularly the former president would take that very personally,” a Democratic fundraiser with ties to the Clintons says. “Anyone in their circle waits until they see what happens.”

Major money in Hollywood is watching, too. Despite a split in 2007 with mega-donor David Geffen and Hollywood producer and fundraiser Jeffrey Katzenberg—both men backed Obama early in the 2008 race, after supporting Bill in the 1990s—Hillary Clinton’s California ties remain strong, says Mike Medavoy, a Hollywood producer and major Democratic fundraiser. “If she decides to run, will there be a response out here to raise money and all the other things she needs? Yes,” he says. “She has a huge base here. She’s not going to have any problem [raising money]. None.”

More than anything, the Clinton cash freeze speaks to her first-choice status among the elites of the party. The other candidates are left to jockey for the best position they can should Clinton decide not to run. “Right now, for O’Malley and Patrick,” Stratton says, “the best thing they could do is be everybody’s second choice.”