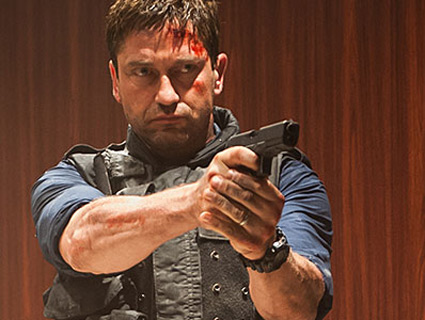 In Olympus Has Fallen (FilmDistrict, 118 min.), highly trained and well-armed North Korean terrorists storm the White House, murder nearly every Secret Service agent in Washington, DC, and take the president hostage in the underground command center. The terrorists explode large chunks of the White House, tear down its American flag in particularly heinous fashion, kill a lot of innocent civilians, and knock over the Washington Monument in the process. And a lone agent (played by Gerard Butler) is the only one who can save the day, mostly by using sharp objects, assault weapons, and Die Hard–emulating trash-talk.

Given that the real-life White House is fairly well protected—maybe with lasers—and hasn’t been burned down since the British invaded in 1814, this film isn’t going to win awards for realism. (The assumption of such paramilitary competence on the part of the North Koreans is also really, really funny.)

But even the most intentionally unrealistic action movies aim to get some details right. The Core, a 2003 sci-fi disaster movie about scientists who travel to the center of the Earth to set off nukes, had its very own scientific consultant. And Olympus Has Fallen director Antoine Fuqua (Training Day, Tears of the Sun) sought out a good deal of Washington and Secret Service advice on how to craft his thriller. One of the technical consultants was Joe Bannon, a former special agent with the Office of the Attorney General and Department of Justice in Los Angeles, where he also worked as an allied agent with the Secret Service.

“I understand the terrorist mindset [of] willing to lay down their life for what they believe in.”

Bannon now teaches presidential and heads of state protection—as well as a form of martial arts that combines “ancient Shaolin Wisdom with Modern Medical Science“—at the Bannon Institute of Martial Arts and Executive Security International in Colorado. And as brawny as that may sound, when he talks about protective services, Bannon blends religious convictions and psychological maxims. “I understand the terrorist mindset [of] willing to lay down their life for what they believe in,” Bannon told me. “Not that I agree with any attack on the United States or the White House, but I have to respect that value.”

In his long career as a special agent assisting the Secret Service, Bannon says he served on protection details for George W. Bush, the Clintons, the Gores, Ted Kennedy, Dianne Feinstein, the Saudi royal family, the first family of Kurdistan, Mikhail Gorbachev, and Pope John Paul II. “I provided close-quarter protection for the Popemobile when he gave a service at Mission Dolores in San Francisco in 1987,” Bannon said. “I helped him down the stairs of the Popemobile and he smiled at me and touched me on the shoulder. Everyone wanted to rub my shoulder after that to get, like, a blessing out of me.”

Bannon came to Hollywood by way of Fuqua. They were introduced through Bannon’s then partner Paul, who had advised Fuqua on 2001’s Training Day starring Denzel Washington. Bannon has since consulted or advised the director on movies such as Tears of the Sun, starring Bruce Willis, and Shooter, starring Mark Wahlberg (Bannon’s background as a sniper came in handy for that second one). “Antoine is such a passionate guy for accuracy and detail,” Bannon says. “He is very patriotic. He does an incredible amount of research for his movies.”

For Olympus Has Fallen, Bannon coached star Gerard Butler on how to portray super-agent Mike Banning—while, as Bannon is quick to point out, “not giving away any classified protocol.” Bannon was pleased to learn that Butler came prepared with hand-to-hand and firearm training from films like Gamer, Machine Gun Preacher, RocknRolla, The Bounty Hunter, and that movie your college roommates wouldn’t stop quoting loudly. The ex-special agent took Butler out to a firing range with machine guns and live ammunition, reviewed hand-to-hand stances, and spent hours talking to him about what it is like to protect a president. He emphasized how serving as a protector should be treated as a sacred “service to humanity and service to god.”

“I did my job, but I took a lot of heat for it; Gerard Butler on the bridge did his job, and he was reassigned, too.”

“Gerard already had that discipline, and he’s a good shot!” Bannon recalls. “He was a sponge to learning. He was an absolute pleasure to work with…and we immediately connected when we met. He told me he saw a certain passion and intensity in my eyes that he really liked.”

Bannon also shared a personal anecdote that Butler used to more fully comprehend his character’s psychology. Toward the beginning of the film, the president’s motorcade gets thrown off a bridge due to an unforgiving snowstorm near Camp David. Agent Banning is forced to make the snap decision to save the president’s (Aaron Eckhart) life, while allowing the First Lady (played by potential Senate candidate Ashley Judd) to plummet to an icy grave. The president, who now cannot look at Banning without thinking of his wife’s tragic demise, has the agent reassigned off of his detail. Bannon says he has his own “president-on-the-bridge story”: In 1996, Bannon was a San Francisco police officer involved in a controversial state-initiated raid on the Cannabis Buyers’ Club, which served AIDS patients, and, Bannon says, was reassigned following a public-relations nightmare. “I did my job, but I took a lot of heat for it,” he says. “Gerard Butler on the bridge did his job, and he was reassigned, too.”

Recently, Bannon got to attend the gala premiere of Olympus Has Fallen. He’s happy with the part he played: “I got a say to preserve the integrity and the realism of my profession.”