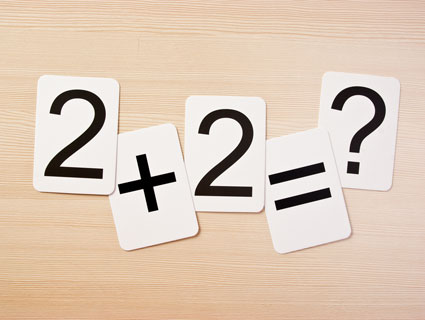 Rep. Paul Ryan’s (D-Wisc.) “new” budget slashes government spending levels to their lowest since 1948, with $4.6 trillion in cuts to things like Medicare, Medicaid and other programs for the poor. It reduces tax rates for the rich and corporations without saying how it will pay for them. It repeals Obamacare. But wait, there’s more. According to a new analysis by the Center on Budget and Policy Priorities, the budget also contains billions in phantom defense savings. That means Ryan’s budget doesn’t achieve the whole point of his budget: cutting the deficit to zero in ten years.

How does this work? Well, writes Richard Kogan, a senior fellow at CBPP, the defense savings in Ryan’s budget are “flatly inconsistent” with the defense spending in his budget. Huh? According to calculations by the Congressional Budget Office, the spending levels that would be caused by Ryan’s funding levels don’t match up. CBO says Ryan’s funding levels would cause $100 billion more in spending than he accounts for in his budget. The budget achieves some savings by not extending the Defense Department funding for Hurricane Sandy relief. But CBPP has searched through the 91 pages, and can’t find any way to explain where the rest comes from.

The Ryan budget reverses defense sequestration, which is the 9 percent haircut the Pentagon had to take because Congress couldn’t come up with a better plan. If he kept those cuts in place, he could make up $25 billion of the missing savings. But still, “his budget contains about $75 billion in spending reductions that do not come from funding reductions,” Kogan writes, “which means they will not happen and are phantom savings.”

When he rolled out his plan last week, Ryan called it a “responsible, reasonable balanced plan.”

No, Kogan says. “The budget’s heavy reliance on massive, unspecified savings, along with its understatement of defense spending, suggest that it wouldn’t work as advertised in achieving major deficit reduction, let alone in reaching budget balance,” he writes.

Bad math aside, CBPP and lots of other economists say cutting the deficit to zero shouldn’t be the goal in the first place:

To be sure, we do not consider a zero deficit to be a meaningful target. Instead, policymakers’ goals should be:  for the short term, to assist the recovery by not imposing too much austerity too soon, a test that the Ryan budget fails to meet; over the mid-term, to stabilize the debt as a percent of gross domestic product; and ultimately, to reduce the debt ratio.