Gun enthusiasts haven’t taken kindly to our story and map this week showing that gun suicides outpace traffic fatalities in many states. They’ve responded in droves with a common NRA talking point, which is that people who want to kill themselves will do it with or without guns. In fact, however, research shows that that assumption doesn’t hold water.

US military brass have been spending a lot of time and money looking at how best to reduce the suicide rate among US troops, which has skyrocketed in recent years. They have concluded that it’s false to assume that people intent on killing themselves will find a way to do it even if they can’t get a gun. In a report to Congress in July, the Military Suicide Research Consortium noted that “Studies demonstrate that method substitution is rare.”

That’s why simple things that can delay access to a gun, like mandatory background checks for all handgun purchases—including private sales—like those that would be required by a new bill recently passed by a Senate committee, can make a big difference in preventing suicide. States with such a requirement have a gun suicide rate 50 percent lower than states that don’t, even when their non-gun suicide rates are about the same. 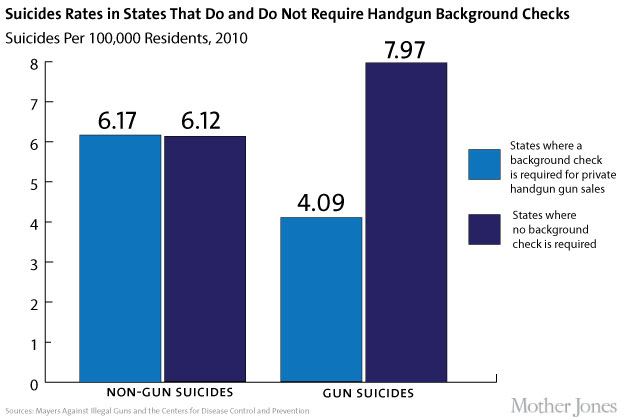 One reason this hold true is that, research shows, suicide is often an impulsive act, and one that people haven’t given much thought. That’s especially true in gun suicides, where the majority of victims don’t have a documented serious mental illness. If some in a crisis simply can’t access a gun quickly, they may not try suicide at all, or they may try a less-lethal means that offers more chance that they’ll be saved. And most people who survive a suicide attempt don’t go on to take their own lives at a later time.
It’s no coincidence that as American armed forces are plagued with high rates of suicide, Ft. Drum, in upstate New York, stands out with a lower rate of suicide among military personnel than most military bases across the country. New York State has some of the nation’s tightest gun laws, and Col. (Ret.) Elspeth Cameron Ritchie, a psychiatrist and former adviser to the Army surgeon general, explained to Stars and Stripes last year that in New York, “it’s not so easy to get drunk, get a gun and shoot yourself.”
Ritchie’s isn’t just idle speculation, either. The Israeli Defense Forces, much like American troops, was seeing a disturbing number of suicides in the ranks in 2006. In an effort to bring down the numbers, the IDF banned soldiers from bringing their rifles home with them on the weekends. Suicides fell by 40 percent, according to a study by Israeli psychiatrists.

As injury-prevention researchers at Harvard have said, “means matter.”

Note: All suicidal thoughts, behaviors, and attempts should be taken seriously. Get help 24/7 by calling the National Suicide Prevention LifeLine at 1-800-273-TALK. Help is also available online at www.suicidepreventionlifeline.org. Trained consultants will provide free and confidential crisis counseling to anyone in need.