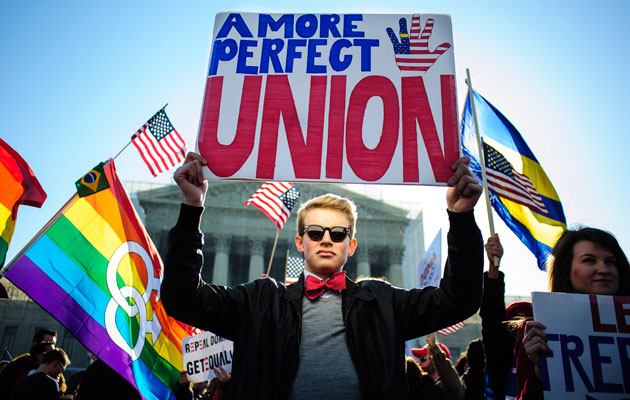 Once upon a time, there was an overreaching and intrusive federal government that stuck a woman who lost her spouse with a $300,000 tax bill. Then a group of black-robed heroes who believe in constraining excessive government power saved the day and told the nasty feds they couldn’t do that.

That may sound like a conservative fairy tale. But in this particular story, the widow, Edith Windsor, who lost her partner of more than 40 years in 2009, is a lesbian; thanks to the Defense of Marriage Act, which prohibits the federal government from recognizing her marriage, when her wife died she could not claim a tax benefit afforded married people and was hit with a $363,053 estate tax bill. So when the Supreme Court heard arguments on Wednesday concerning a challenge to DOMA, this was truly a test for the conservative justices, who have been handed an opportunity to demonstrate whether they truly possess a principled opposition to overreaching big government. Yet during oral arguments—which came a day after arguments on the constitutionality of Proposition 8, California’s same-sex marriage ban—it was the Democratic appointees on the court who seemed more eager to ride to Windsor’s rescue and uphold the conservative notion that the federal government cannot infringe on a state’s definition of marriage.

Justice Ruth Bader Ginsburg summed it up this way: DOMA diminishes “what the states say is marriage” by treating same-sex and opposite-sex marriages differently, denying federal benefits and recognition to same-sex marriages performed or recognized in a state. Under DOMA, Ginsburg commented, heterosexual couples were receiving “full marriage” while same-sex couples were getting “skim-milk marriage.”

The Obama administration announced in 2011 that it considered DOMA, which was passed in 1996, unconstitutional and that it would not defend the law in court. So former Bush Solicitor General Paul Clement, who argued in defense of the law on Wednesday, was doing so on behalf of House Republicans angered by Obama’s decision. The previous day, Charles Cooper, who served in the Justice Department during the Reagan administration, had defended Proposition 8 by invoking the usual social-conservative talking points: Marriage is for procreation, and same-sex marriage is bad for kids. Clement, though, never mentioned procreation or potential harm to children. He stuck to a process-oriented defense.

The Defense of Marriage Act, Clement contended, only defined marriage as a hetero endeavor for the purpose of federal laws and, therefore, wasn’t an imposition on the states, even though the law was enacted because legislators feared the states would legalize or recognize same-sex marriage. With DOMA, the federal government was merely seeking “uniformity,” Clement insisted, ensuring that mentions of “marriage” in federal law only applied to unions between men and women. That desire for clarity, he maintained, was enough to justify the law.

Searching for a precedent to justify a federal role in defining marriage, Clement invoked the US government recognition of the marriages of freed slaves during Reconstruction. “In the wake of the Civil War and in Reconstruction, Congress specifically wanted to provide benefits for spouses of freed slaves who fought for the Union,” Clement said. He seemed to be unaware of the irony of citing a federal decision to extend marriage rights to one group in order to justify denying such rights to another group.

Solicitor General Donald Verrilli Jr. and Windsor’s attorney Roberta Kaplan were eager to argue that DOMA violates the Constitution’s guarantee of equal protection under the law, and that laws discriminating on the basis of sexual orientation, similar to laws affecting people on the basis of race or religion, should be subject to a higher standard of legal justification known as “heightened scrutiny.” Despite their efforts, the court stayed glued to the issue of federalism for most of the session. Yet federalism may be enough to overturn the Defense of Marriage Act. Justice Anthony Kennedy sounded like he might provide the crucial swing vote, as he has in the past on gay rights cases. “When…the federal government is intertwined with the citizens’ day-to-day life,” Kennedy said, “you are at real risk of running in conflict with what has always been thought to be the essence of the state police power, which is to regulate marriage, divorce, custody.” Kennedy was hinting that DOMA might infringe on powers he thinks belong to the states.

Kennedy’s conservative colleagues appeared to be trying to pull him in the other direction. They peppered Verrilli and Kaplan with questions about whether the federal government could define marriage to include same-sex couples—implying that doing so would be no less an act of federal overreach than excluding them.

When Verrilli and Kaplan did raise the issue of equal protection for Americans in same-sex marriages, Chief Justice John Roberts focused on the people he thinks are the true victims in this whole legal controversy: the lawmakers being accused of anti-gay bias for banning federal recognition of same-sex marriage. Noting that 84 senators voted for DOMA and President Bill Clinton signed the measure into law, Roberts asked Verrilli, “They were motivated by animus?” The correct answer was “yes”—legislators at the time explicitly stated the purpose of the law was to “promote heterosexuality” and “defend traditional notions of morality”—but Verrilli said “no.” Roberts demanded to know if Verrilli and Kaplan thought the law was motivated by hatred. Kaplan replied, “DOMA was enacted to defend against the marriages of gay people.”

Looking for another avenue to undercut the case that DOMA was the product of anti-gay animus, Roberts pointed to the “sea change” in public attitudes towards homosexuality and suggested that gays and lesbians were “politically powerful”—a description that would prevent laws dealing with sexual orientation from being subject to heightened scrutiny. “As far as I can tell,” Roberts said, “political figures are falling over themselves to endorse your side of the case.” Until fairly recently, gays and lesbians were barred from employment by states and the federal government, and until 2003, states criminalized homosexual sex—and would still be able to do so, if several of the justices now sitting on the court had their way. Just ask Antonin Scalia, who argued last year that laws criminalizing homosexual sex were constitutional because “for 200 years, it was criminal in every state.” But for Roberts, recent developments in public opinion undo that entire history of discrimination—and render moot the motives of DOMA’s authors.

As with California’s ban on same-sex marriage, the Supreme Court could avoid ruling on DOMA by declaring that the House of Representatives lacks the standing to sue. That is, the court could say that because the House GOPers standing up for DOMA are not harmed by the lower-court rulings that struck it down, they don’t deserve to have the Supreme Court rule on their appeal. Or it could take a pass by stating that the court lacks jurisdiction to decide the case because the executive branch (under Obama) agrees with Windsor that DOMA is unconstitutional. Roberts, Justice Stephen Breyer, and Kennedy at times seemed attracted to this escape route—and it’s unclear what such a ruling would mean for DOMA, given the lower-court rulings that found it unconstitutional.

Several justices did find common ground—in their contempt for the Obama administration’s decision to continue enforcing DOMA while asking the Supreme Court to overturn it. “I don’t see why [Obama] doesn’t have the courage of his convictions…rather than saying, ‘Oh, we’ll wait till the Supreme Court tells us we have no choice,'” Roberts said. Kennedy said the Obama administration’s position—that it would uphold the law but not defend it—could give you “intellectual whiplash.” If Obama had actually decided not to enforce DOMA, however, it’s easy to imagine justices being outraged with a president deciding to ignore a law he doesn’t like.

However the justices rule, what was perhaps most notable in the two days of oral arguments concerning these marriage equality cases is that the lawyers for those opposing gay rights believe their side will ultimately lose this battle—if not in the courts, than in the political realm. Cooper said as much on Tuesday. And on Wednesday Clement essentially said the movement against gay marriage was doomed. Ticking off a series of gay rights victories in various states, he remarked, “The reason there has been a sea change is a combination of political power…But it’s also persuasion. That’s what the democratic process requires. You have to persuade somebody you’re right. You don’t label them a bigot. You don’t label them as motivated by animus. You persuade them you are right. That’s going on across the country.”

He was sort of arguing that were the court to rule against him, it would be piling on. But Clement was also conceding that no matter what happens at the high court, same-sex couples will probably get a fairy tale ending. The question is how long that takes—and whether the Supreme Court assists or impedes the ultimate victory.