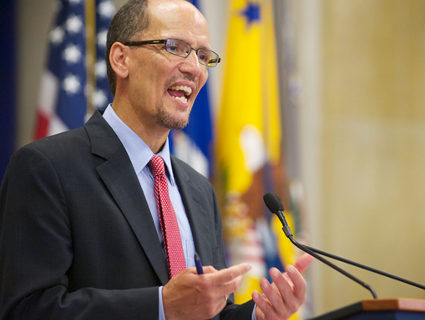 Update, Sunday, March 17, 8pm PST: It’s confirmed—President Obama will nominate Perez to be his next labor secretary on Monday, according to Politico.

If President Barack Obama nominates Assistant Attorney General for Civil Rights Thomas Perez to head the Department of Labor, as media reports say he might, the president will be elevating one of the most effective and progressive senior administration officials to his cabinet.

“If he were to be picked, I think he would be an excellent labor secretary,” says Eliseo Medina, treasurer of the Service Employees International Union. “This is a guy who has been dealing with issues that really matter to working people in this country.”

When Perez was nominated to head the Department of Justice’s civil rights division, some congressional Republicans sought to block his confirmation over since discredited allegations regarding a voter intimidation case involving the New Black Panther Party and Perez’s advocacy on behalf of undocumented immigrants. During the Bush years, the division had been marred by partisan politics and declining civil rights enforcement. But since Perez took the helm, the division has blocked partisan voting schemes, cracked down on police brutality, protected gay and lesbian students from harassment, sued anti-immigrant Arizona sheriff Joe Arpaio for racial profiling, stood up against Islamophobia, and forced the two largest fair-housing settlements in history from banks that discriminated against minority homeowners.

Perez says he doesn’t think of civil rights as a partisan issue—he takes pride in the fact that he was first hired by the civil rights division as a career attorney under President George H.W. Bush. But now that conservatives are working hard to roll back civil-rights-era legislation, Perez’s unapologetic civil rights advocacy stands out and makes him a target for the right.

Before Perez ran the civil rights division, he was chosen by Maryland Gov. Martin O’Malley to head the state’s Department of Labor, Licensing, and Regulation. In this position, he earned plaudits from unions for taking a hard line against employers who were dodging overtime pay, benefits, and taxes by classifying employees as independent contractors. “They were basically cheating their workers out of payment and other benefits to which they’re entitled,” says Lynn Rhinehart, general counsel at the AFL-CIO. Some of the workers classified as “contractors” were doing dangerous work, such as construction, yet because they were not employees, they could be denied worker’s compensation if injured on the job. Perez pushed for new state legislation to eliminate the practice by imposing stiff penalties on employers who break the law. The bill was signed into law by O’Malley in 2009. Fred Mason, head of the Maryland branch of the AFL-CIO, praised Perez’s “tenacity” in helping to get the new rules passed. “This is someone who understands the relationship between worker rights and human rights,” he says.

Immigration reform advocates have high hopes for Perez, the child of exiles from the Dominican Republic. Gustavo Torres, head of the immigrant advocacy organization CASA de Maryland, told Mother Jones last year that while serving on the group’s board, Perez played a key role in turning the organization into an influential force. “We were a very small organization; we were dreaming of how we could make a difference,” Torres said. Perez “helped us develop a strategic plan to expand the organization around the state.” Perez, Torres said, “truly believes in integrating the immigrant community, and believes in comprehensive immigration reform.”

But Perez has made political enemies, too. Chief among them is Sen. Chuck Grassley (R-Iowa), the ranking Republican on the Senate judiciary committee, who has been harshly critical of the civil rights division’s aggressive approach. The politicization of the civil rights division in the Bush era has been well documented, but Grassley accused Perez and the current division of similar behavior. Grassley signed a 2010 letter to Senate Judiciary Committee chairman Patrick Leahy (D-Vt.) accusing the division of “widespread politicization and possible corruption” related to the discredited allegations regarding the New Black Panther Party. In 2011, Grassley complained that too many new hires at the civil rights division had previously worked for “liberal advocacy groups,” by which he meant civil rights organizations.

Grassley and other congressional Republicans’ latest accusation is that Perez improperly influenced a decision by the city of St. Paul, Minnesota, to withdraw its attempt to get the Supreme Court to hear a fair-housing case. The lawsuit stemmed from what the city saw as a crackdown on slumlords cynically exploiting civil rights law, and what some property owners claimed was an attempt to use building codes to displace low-income and minority renters so their neighborhoods could be gentrified. Conservatives hoped that the case would lead to a Supreme Court ruling that housing practices with a disparate impact on minorities do not violate the Fair Housing Act.

Grassley has accused Perez of convincing St. Paul to drop its federal appeal in exchange for the feds not intervening in an unrelated lawsuit, in which the city stands to lose nearly $200 million in federal grant money. That case has a racial angle too: The plaintiffs are accusing the city of misusing those federal dollars by discriminating against white workers.

It’s hard to evaluate Grassley’s most recent accusation because the internal documents they’re supposedly based on haven’t been made public. But one thing is clear: Conservatives are angry about losing an opportunity to use the Supreme Court to roll back another signature piece of civil-rights-era legislation. When news reports noted that Obama might tap Perez for labor secretary, Grassley focused on the St. Paul fair-housing case, griping, “It’s hard to believe that the president would nominate somebody at the heart of a congressional investigation,” referring to congressional Republicans’ accusations that Perez improperly tried to keep the case from reaching the Supreme Court. Yet nothing’s been confirmed in that case.

If Perez is nominated, Senate Republicans will gather whatever ammunition they can—even if Grassley’s allegations prove unfounded—simply because Perez boasts the sort of résumé progressives want for a cabinet secretary. Both sides, no doubt, will see him as a nominee worth fighting over.