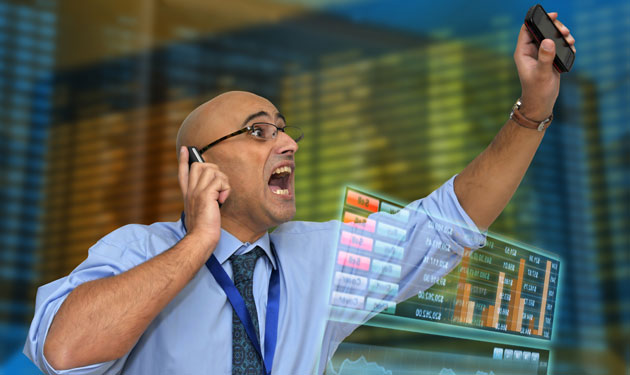 In the January/February issue of Mother Jones, I wrote about Wall Street’s embrace of high-speed computer programs that execute thousands of trades per second. These algorithms, some of which can teach themselves and operate almost entirely without human interference, present a new and challenging danger to the stability of global financial markets because they work in timeframes that people can’t begin to perceive. By the time an actual person realizes something is wrong, it might already be too late to fix the problem. The concern isn’t that one firm’s high-speed trading program will make a mistake, but rather that a bunch of them will make the same mistake at once, launching a chain reaction that could undermine the financial system.

On Tuesday, the world saw exactly how fast these sorts of programs can respond to bad news. Many high-speed trading algorithms are designed to read headlines and trade based on that information before human traders can react. So when the Associated Press Twitter account tweeted at 1:07 p.m. Eastern time on Tuesday that two explosions were reported in the White House and President Barack Obama was injured, the market fell immediately. Here’s an image of the tweet in question: 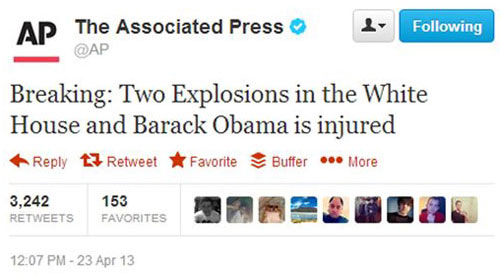 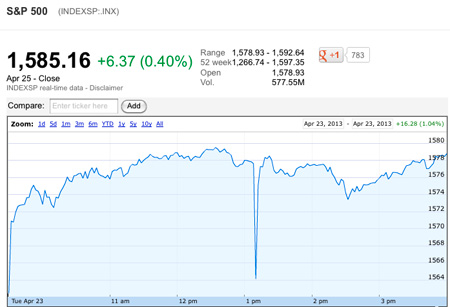 The S&P 500 fell nearly 1 percent, wiping out more than $130 billion in shareholder value in minutes. As the market plunged, quotes—offers to buy or sell—surged. But the vast majority of those offers were withdrawn before anyone could trade on them. Liquidity—a term that refers to the ease with which traders can buy or sell a financial product—dried up, suggesting that today’s highly liquid markets are in fact very fragile. Liquidity in the S&P 500 E-Mini, the most important stock futures contract, has “never dropped that quickly and that far that fast—ever,” says Eric Hunsader, who runs NANEX, a firm that provides software and services to high-speed traders. “The faster that we let trading go, the faster liquidity will disappear,” he adds. For ordinary traders, the sheer speed with which high-speed traders pulled out of the market in the wake of the phony AP tweet suggests that “the investor is a spectator not a participant.” He continues, “There is no way [the average investor is] going to be able to get in and take advantage of something like this. The prices you see on CNBC might as well be a newspaper at the end of the day.”

Dave Lauer, a critic of high-frequency trading who used to write trading software, says he’s not sure it was a bad thing that the market fell so far so fast. “For all intents and purposes for a few minutes people thought a bomb went off at the White House,” he says. “I [understand] the complaint that [high-speed trading] provides liquidity in good times and it’s not there in times of stress, but I think this is kind of a red herring.”

Within about five minutes—after it became clear that the AP tweet was fake, the Twitter account was suspended, AP journalists tweeted that the tweet was false, and a group of Syrian activists claimed responsibility—the market recovered its losses. But the incident suggests that someone with the ability to hack high-profile Twitter accounts could wreak havoc on US and world financial markets, and make a lot of money doing so. If you knew that a hacked tweet was about to panic the markets, you could short the market for that period of time, or buy low when stocks hit bottom, knowing they’d recover when the news proved to be false. In fact, the fake tweet made regulators suspicious that something like that might have happened: The Commodity Futures Trading Commission is investigating trading in 28 futures contracts during the tweet crash to make sure everything was above-board and no one had inside information. The Federal Bureau of Investigation and the Securities and Exchange Commission are also probing the incident.

Although Lauer doesn’t think the tweet crash points to problems with the markets themselves, he does worry that the SEC doesn’t have the tools necessary to quickly figure out what exactly happened. “This is something they should be on top of right away,” he says. “I don’t think they have that capacity right now.” (More on that here and in the magazine piece.)

If the AP tweet had been real, the markets may not have been able to handle the strain, Hunsader counters. “If that was a real news event, the market would have been off. It would have been flash crash two,” he says, referring to the May 2010 crash that caused around $1 trillion in shareholder value to evaporate in minutes before the market recovered. “It would have been right down, straight down. We would have been in serious trouble system-wide.” Minutes are like hours or even days in the world of high-speed trading, and in the five minutes of the tweet crash, NANEX’s computers tracked trades that had been delayed by four minutes because of unexpected market activity. If the tweet crash had gone on much longer, stub quotes—placeholder orders at outrageously low or high prices that firms never expect to execute—would have started being processed, just as they were during the flash crash, Hunsader says.

“We need certain rules of the road for technology, and that’s particularly true with the advent of social media,” Bart Chilton, a CFTC commissioner, told CNBC Wednesday. Chilton, like many of the people quoted in my story, is concerned that high-speed trading firms aren’t required to have a “kill switch” they can flip if a trading program goes rogue—and there’s no such fail-safe at the market or regulatory level either. This sort of light-speed market crash has happened before. It will happen again. The only question is how bad the next one will be.