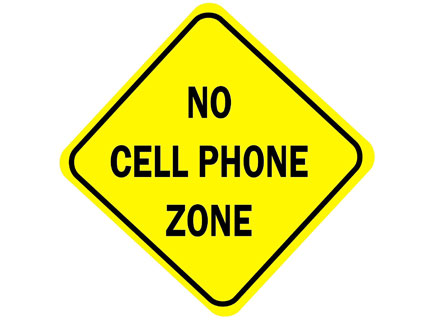 Shortly after the horrific explosions that interrupted the Boston Marathon Monday, the Associated Press reported that the government had shut down cellphone service in the area. That wasn’t true—but it’s not impossible.

“No one in Washington or in any statehouse or bunker anywhere can press a button and shut down phone service,” explains Harold Feld, vice president at Public Knowledge, an advocacy group focused on communications and technology policy. But although there’s no physical kill switch, there is Standard Operating Procedure 303, a secret agreement between telecommunications giants and the government that outlines “a shutdown and restoration process for use by commercial and private wireless networks during national crises,” according to a government report on the subject. The government can shut down cellphone service—but it didn’t do so in Boston on Monday.

Because SOP 303, also known as the Emergency Wireless Protocols, is classified, the public doesn’t know under which specific conditions a shutdown could occur. But in 2006, the National Security Telecommunications Advisory Committee (NSTAC), a group of major telecom company executives and government officials, issued a report that revealed some details about SOP 303. The committee’s report explained that the National Coordinating Center for Telecommunications (NCC), an emergency telecom coordination body set up by President Ronald Reagan in 1984, would serve as a clearinghouse for requests to shut down wireless networks “within a localized area, such as a tunnel or bridge, and within an entire metropolitan area.” The NCC—which includes representatives from the Central Intelligence Agency, Federal Emergency Management Agency, National Security Agency, every important cabinet department, and a few dozen big telecommunications and defense companies—would take shutdown requests from state and national Homeland Security officials, verify whether they are “necessary,” and pass those requests on to wireless carriers in the affected areas. The same process would happen in reverse once the NCC determines the shutdown is “no longer necessary.”

So how did an unelected group of telecommunications and defense industry representatives, spies, and government bureaucrats get the job of determining whether to pull the plug on cellphone service? It all started in July 2005, after the London subway bombings that killed over 52 civilians and four suicide bombers and wounded more than 700. Shortly after the London attacks, the US government, fearing follow-up strikes, decided to shut down wireless telephone service in four tunnels between the island of Manhattan and the surrounding areas of New York and New Jersey. The “resulting situation, undertaken without prior notice to wireless carriers or the public, created disorder for both Government and the private sector at a time when use of the communications infrastructure was most needed,” according to the NSTAC report.

That August, after having annoyed both industry and government by abruptly shutting down cell service in the tunnels, the Bush administration convened a panel of telecommunications company executives and government officials to discuss how to do it better next time. The task force issued its recommendations in January 2006, and two months later, the National Communications System—a now-defunct government agency—approved SOP 303.

Boston’s top cellular service providers maintain that they did not shut down service in Boston in the wake of Monday’s bombings. Contacted by Mother Jones Monday afternoon, a Verizon spokesperson said that service had not been shut down, and that Verizon had not been asked to shut service down. AT&T tweeted that users might have trouble because of everyone trying to use their phones at the same time, but that the network was still up.

There are no publicly known instances of SOP 303 being used. In 2011, after Bay Area Rapid Transit shut down cellphone service in its stations to scuttle a planned protest, the Federal Communications Commission called for public comment about when and whether it’s appropriate for authorities to interrupt communications in the name of public safety. But the agency never issued any new rules or regulations on the subject—because, Feld says, it didn’t want to anger law enforcement authorities who want broad authority to act in emergencies.

It’s unclear whether SOP 303 is constitutional—the specifics of the agreement are secret and the limits of government authority in this area have never been tested in court. According to Eva Galperin of the Electronic Frontier Foundation, governments “in places like China” “regularly” shut down cellphone service to quell protests. “They did it in Egypt as well,” she explains, during the protests that deposed former Egyptian president Hosni Mubarak. Feld says that the United States government would be on stronger constitutional footing if it asked telecommunications companies to shut down service in order to prevent bombs from being triggered than if it tried to shut down service to curtail a protest. “Pulling a Mubarak” on demonstrators is probably unconstitutional; shutting down communications to prevent an unfolding terrorist attack may not be.

“The context is important,” Feld says. “If the shutdown is because we’re concerned about what [protesters are going to] say, that raises much more fundamental First Amendment concerns than [if the government says] ‘we’re afraid there’s a bomb in the area that could be triggered by a cellphone.'”

Another problem is that it’s not clear that shutting down communications would be helpful during a terrorist attack.

“You would have to make the case that it would more harmful to accidentally trigger this bomb than to prevent all of these people from communicating with each other in an emergency,” Galperin says. “The benefit of people being able to communicate on their cellphones in times of crisis is enormous, and cutting that off is in and of itself potentially very dangerous.”